Some call to open county restrooms

Homeless and their advocates call it health issue 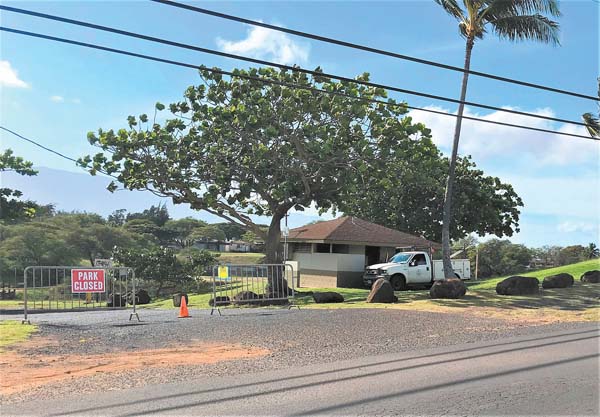 With reports of people defecating in public areas, homeless people and advocates, as well as business owners, are urging Maui County to open some park restroom facilities, which were closed earlier this month as part of coronavirus prevention measures.

Lisa Darcy of Share Your Mana, an organization that helps homeless people, called for reopening of parks with bathrooms and water facilities or community centers “ASAP with soap.”

“People get cut all the time and use facilities to keep safe and sanitary, preventing infections,” she said in an email Tuesday. “We need to be proactive and do not need these types of injuries in the emergency room right now. We need a solution today.”

Maui County shut down its inland county parks and restrooms March 14, and then beach parks Monday. The initial closure of parks and playing fields was implemented because county officials said they were concerned about people congregating and not practicing social distancing.

At a news conference Tuesday, parks Director Karla Peters said there will be more portable toilets “located in strategic areas.”

“Staff will be there assessing and providing what we can,” she added.

Water is still on at beach parks with showers operational. She urged people to practice social distancing.

At the same news conference, Maui County Mayor Michael Victorino defended his decision to close the parks and noted taking criticism for it.

“Two weeks later, we are finding out the reasons,” Victorino said referring to the rising number of COVID-19 cases on Maui. “It has come very quickly, and very profoundly through the nation, through the state and through the county.”

Locations of parks with portable toilets can be found at www.mauicounty.gov/2373/Open-Park-Restrooms.

County officials were asked if people could use portable portable toilets and showers even if the parks are closed.

“To fight the spread of cornoavirus, we want people to comply with the stay-at-home order, and only travel outside for specific, essential activities like shopping for groceries, visiting a doctor or obtaining medications,” county spokesman Brian Perry replied. “Another essential activity is engaging in solitary outdoor activity. So when people are done with such exercise, they are asked to return home.”

He said the larger parks do not need to be opened, just a few parks with restrooms, running water and perhaps an open place to cook.

“The beach parks or some of the county parks that have a restroom facility should be open just for sanitary reasons,” Rumsey said in a call from the Lahaina Safeway parking lot Tuesday morning.

He called back later to say he tried to fill up water jugs at Launiupoko Beach Park but the water was turned off.

Perry said that there is a broken waterline at the Launiupoko park and work is ongoing to repair it. Beach showers were working at all other parks.

“In the meantime, the parks department is working to bring in portable hand washing stations and port-a-potties,” Perry said.

Rumsey, a senior citizen who works as a bus driver, currently is out of work with the closing of public schools at least until April 30. He’s also had a hard time filing an unemployment claim, unable to get through the state’s system, which has been crashing.

Rumsey suggested the county set up a place where the homeless could park overnight, use restroom facilities and leave the next morning.

Rumsey’s call to open restroom facilities was echoed by a Kihei business owner, who came across excrement with toilet paper next to a storm drain near his business Monday.

The owner, who wanted to be anonymous because of concerns over retaliation, said he called the county and left a message about the issue.

He said there always has been a problem with homeless people along Kio Loop in Kihei, which is mauka of South Kihei Road and near Kihei Regional Park.

But no one was defecating in the area until the parks were closed, he said.