COVID-19 patient in isolation at MMMC 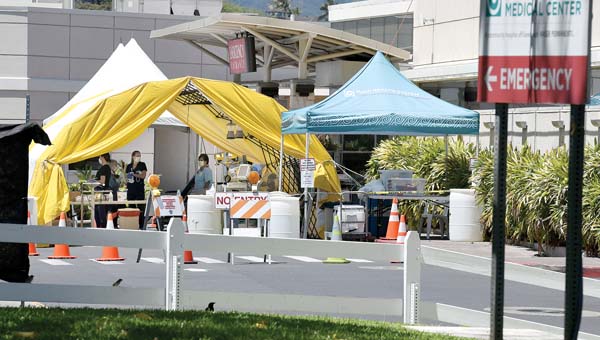 Appropriate isolation precautions are in place, Maui Health said in a news release. The hospital did not release any more information about the patient or treatment protocols.

“Maui Health is handling this case with the utmost respect to privacy, while also working closely with the DOH (Department of Health) to ensure that patients, employees, family, friends, and anyone who has been in close contact are assessed and the extent of their exposure is reviewed,” the news release said.

Maui Health said that it has been taking proactive steps to mitigate exposure to patients, caregivers and the community. This includes asking sick employees to stay home, increasing the use of telework, encouraging social distancing and other preventative measures.

Since Wednesday, no visitors have been allowed at any hospital facility, except in the pediatrics and obstetrics wards, which are limited to one visitor per patient.

In other health-related coronavirus news, Hawaii is among the top three states per capita for coronavirus testing in the nation, led by New York and Washington state, state health officials said Wednesday.

Aggressive testing, along with the ability to seal access to Hawaii, puts the state in a unique position to fight the virus, according to state Health Director Bruce Anderson. So far, 10,462 tests have been done by state and private labs since Feb. 28.

“I think we’re in good shape to try to keep case numbers down,” Anderson said at a news conference.

Still, health officials said they expect things to get worse before they get better. On Wednesday, the state recorded its largest single-day spike of confirmed coronavirus cases –34, including one minor.

The state total was 258 presumptive or confirmed cases as of noon Wednesday, including two residents diagnosed outside of Hawaii and 18 under investigation.

After completing a review of the case, Anderson said Wednesday that it has been determined that the man’s death was consistent with and was likely caused by coronavirus. Testing will be repeated, but the results are expected to stand, he said.

The man was likely exposed to the virus during a trip to Las Vegas, where the illness is widespread, he said.

Responding to a question from The Maui News, Anderson confirmed that Hawaii does have a low mortality rate for the coronavirus. Typically, the death rate is two or three per hundred confirmed cases, he said, which should put Hawaii at five or six deaths.

He attributed the low death rate to the “excellent” health care system in Hawaii and residents who are aware of and recognize the disease early. People are getting treatment sooner.

“We can still expect more deaths; there’s no question,” he said. “We have generally an older population in Hawaii. I think we’ve generally done well to keep the death rate down.”

Anderson hailed the mandatory 14-day quarantines for travelers from the Mainland and going interisland, the latter of which took effect Wednesday.

Of the state’s 34 new cases, 26 are residents, one is a visitor and seven are pending investigation. Of the state’s 258 confirmed or presumptive cases, 194 are residents and 20 are visitors. Since the end of February, 80 individuals have been released from isolation.

“We’re seeing far fewer visitors, including returning residents coming back to Hawaii at this point in time,” Anderson said.

Health officials expect to see an uptick in the number of cases, but diagnoses will shift away from “imported cases” to cases with no travel history. So far, those cases are limited to local transmission on Oahu.

Anderson said Hawaii’s coronavirus peak is “impossible to predict at this time.” Some models project a few weeks and others forecast a few months.

Officials will be looking for a decrease in cases over 14 days or more before considering relaxing some of the restrictions. For now, all of the mitigation measures put in place are extremely important, Anderson said.

“We have an opportunity in Hawaii that no other state has. We are an island state, we can cut off our borders,” Anderson said. “The governor has essentially done that, not only shut off our borders and kept the disease from coming to us and also, of course, restricted travel within our state so as not to spread the disease any more than necessary.”

A 2006 Volkswagen sedan went over a cliff in the Kapalua area Wednesday morning. The driver was killed. MAUI POLICE DEPARTMENT photo

Amy Ozee and the University of Hawaii beach volleyball team were 7-2 and ranked No. 4 in the nation when the season abruptly ended due to concerns over the new coronavirus. UH ATHLETICS photo

Farmers plant lettuce, onions and choy early Monday morning at Kupa’a Farms in Kula. The farm has turned to putting together produce boxes to survive after its restaurant demand dried up with closures. KUPAA FARMS photo

Gallons of POG are stocked in a refrigerator at Foodland Kehalani in Wailuku on Wednesday. Meadow Gold Hawaii, which produces the juice, is poised to be sold. The Maui News / MELISSA TANJI photo

Maui Police Department officer Lehua Souza tells sunbathers to move along Wednesday afternoon at Ka Lae Pohaku Beach in Kihei. Fishing, swimming, surfing and stand-up paddling alone or with immediate household members as well as exercise activities, such as running and walking, are allowed. Sunbathing and sitting on the beach are not. The Maui News / MATTHEW THAYER photo

Maui musician Marty Dread is compiling his recordings with notable artists like Willie Nelson, Fiji and UK legend, the Mad Professor. “It’s time to get them out to the world,” said Dread. RICHARD PECHNER photo