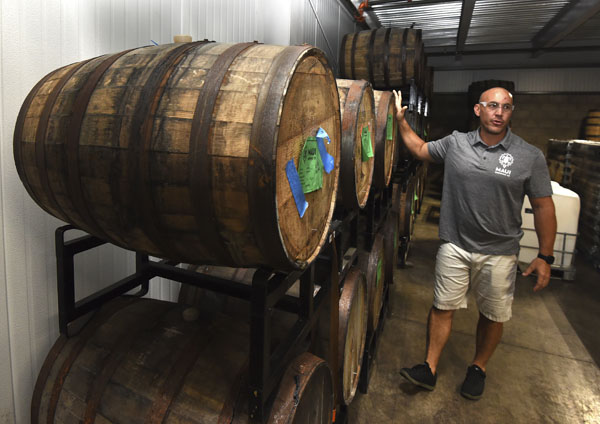 Maui Brewing Co. CEO Garrett Marrero stands next to a row of spirit barrels that once were used to make whiskey, tequila, rum and gin in January. The company, which has been closed by emergency rules, has been making hand sanitizer and giving it away to first responders as well as with any purchase at the store. The Maui News / MATTHEW THAYER photo

“I’ve received numerous emails, social media messages, texts, phone calls in the main line,” CEO Garrett Marrero told The Maui News on Tuesday. “I feel a huge sense of pride in the team here at Maui Brewing Co. for being able to support the community. And to see the support back from the community is just overwhelming.”

The company has donated more than 1,000 gallons of its newly created hand sanitizer, worth about $35,000, to first responders, nonprofits and community members.

However, the method it used to get sanitizer to some patrons now is being probed by the liquor department.

Marrero said a department officer Sunday night called to question him as part of an investigation into company. The allegation is that Maui Brewing violated liquor inducement rules, which prohibit liquor licensees from using certain tactics to encourage people to buy alcohol.

Pukalani resident Kaitlyn Gerondale said the food menu and the sanitizer incentive motivated her to drive to Kihei weeks ago to participate in the Maui Brewing Co. promotion. She added that she did not feel pressured to buy alcohol to receive sanitizer.

“I saw what they’re doing to help the community,” she said Tuesday. “We saw what their menu was, and it looked good. And we saw the hand sanitizer and thought cool, because everyone was out of hand sanitizer.”

After business shutdowns, Maui Brewing pivoted to meet a need for sanitizer and began producing it at its Kupu Spirits distillery in Kihei. Using liquid from whiskey and gin distillation, the company followed government guidelines for ingredients proofed to 70 percent ethyl alcohol and not for human consumption.

The sanitizer carries a “hefty cost” of $25 to $30 per gallon to make, Marrero said.

The company, which sells food, alcohol, coffee, soda and an array of merchandise, recently promoted 16-ounce hand sanitizer with the purchase of any item.

Even if people didn’t want to purchase anything or couldn’t due to shrinking budgets, the company still gave it away, Marrero added.

“No one was turned down,” he said.

“To be clear, it would be illegal for us to say free sanitizer with the purchase of alcohol. If that was our promotion, we would be in the wrong. And we would admit that. But that’s not what we did,” he said. “We said free with any purchase. You could’ve bought a Koozie, a sticker, a T-shirt, a soda, food to go when we were still doing food. Or yes, you could have bought alcohol. But that would have been your choice to buy the alcohol not something we promoted.”

Marrero said he spoke with Maui County Mayor Michael Victorino on Tuesday and said that the mayor is “working hard” to find a resolution.

The mayor, though, does not have authority over the department, which enforces county liquor rules and policies. That is the role of the Liquor Control Commission. The mayor does appoint commission members, and the council approves them.

The department did not immediately respond to a call from The Maui News on Tuesday.

Marrero said he hopes to keep a positive relationship with the department, as he has had in the past, but is firm that the company did not violate rules. He said he looks forward to an amicable resolution soon.

“The public has come out in droves to support us, we certainly appreciate that,” he said. “I look forward to putting this all behind us and having a pint with Maui and the rest of the world one of these days.”

Sanitizer donations were put on hold Monday. Marrero said the company decided Tuesday that moving forward, sanitizer will be sold.