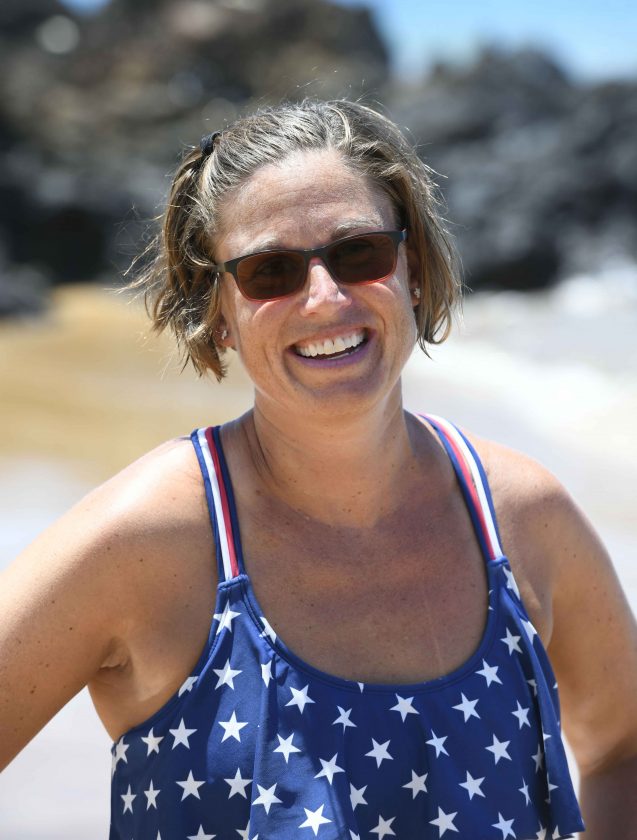 Trina Wade discusses her trip to Maui, which has been clouded by coronavirus, on Saturday. The Maui News / MATTHEW THAYER photo

Trina Wade has been visiting Maui annually for the last 15 years. This year’s trip has been unlike any other, though.

Her family of five was threatened in Paia by locals who were yelling at them to “go home” on Saturday. The locals ended up throwing their Jamba Juice at the rental car, she said.

“We just feel at this point, we’re pretty unwelcome here,” Wade said via phone Saturday night. “They don’t know when we arrived. They think we just got off the plane, but we’ve been here for a long time.”

Tensions have been heightened over tourists and other visitors since coronavirus pandemic began moving toward Hawaii, which is in a unique position to limit access and lessen the spread.

State health officials have said the vast majority of Hawaii’s coronavirus cases involve residents returning from other areas, though. The state had 351 cases Saturday, and more than 80 percent of those are residents, according to the state Department of Health.

The state’s 14-day mandatory self-quarantine started March 26 for all passengers arriving from out of state. The order widened April 1 to include interisland travelers.

Wade traveled from their San Francisco Bay Area home to Maui with her husband March 9. Their three children arrived a little later. The family had planned the trip a year before, she said.

In early March when they got to Maui, there was no 14-day self-quarantine travel mandate, no public health emergency stay at home, work from home orders and no closures of parks, activities and nonessential businesses.

Flash forward a few weeks, and Wade said that Maui has changed drastically. A flight home was canceled last week, and the options to return to California have been limited with airlines cutting routes.

Maui had 26 residents and 11 visitors arrive by air Friday, with four flights that day, according to Hawaii Tourism Authority.

Hawaii as a whole had 628 people arrive via air Friday, comprising 94 visitors and 239 residents. During the same time last year, nearly 30,000 visitors and residents arrived daily.

Amid the coronavirus shutdowns, University of Hawaii Economic Research Organization has forecast Maui County’s job loss percentage to be higher than Honolulu’s due to the Maui’s greater reliance on tourism.

“That recession will surpass anything we’ve seen in our lifetimes,” he told members of a House committee on the economic and financial effects of the virus.

“There’s really not any comparison that you can make to an economy where you basically shut down hospitality and tourism — and will remain shut down for several months — shut down much of the local economy,” Bonham said.

As of recent weeks, fewer visitors are seen on Maui and many have canceled trips, Wade said.

Wade said that it was useless to argue with the locals at the Paia beach Saturday because they already made up their minds about tourists.

“It’s just too bad because they don’t realize this is a state where tourism is huge,” she said.

Still, Wade said she understands that it is a fearful time. She noted that she has never had a negative encounter with Maui residents on previous trips over 15 years.

Wade said her family is staying at a Kihei timeshare and venturing to the beach for exercise activities only. They will likely return to California on Thursday, she said.