Show postponed to Sept. 10; benefits set for late in May 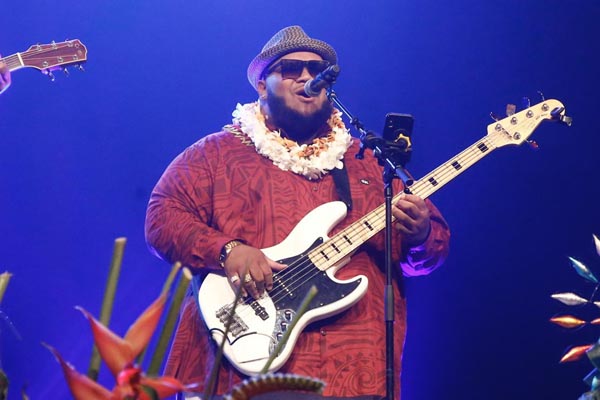 Josh Tatofi of Maui earned eight Na Hoku Hanohano Award nominations, the most of any artist. Maui County was well represented in the nominations with the awards show set for Sept. 10 at the Hawaii Convention Center.

Josh Tatofi woke up last week “to a million text messages” and “wondered what the fuss was all about?”

His latest album, “Ua Kui A Lawa,” had just been honored with the most nominations for the 43rd Annual Na Hoku Hanohano Awards.

The Baldwin High School graduate received eight nominations, including Album of the Year, Male Vocalist of the Year, Song of the Year (the Mauna Kea-inspired “For The Lahui”) and Island Music Album.

“With the Hokus you are lucky if you get one,” says Tatofi. “I’m lost for words. I’m thankful for the love and support of my music. I’m blessed.”

A Grammy nominee for his previous “Pua Kiele” recording, Tatofi felt inspired with his latest album to create music that moved people. 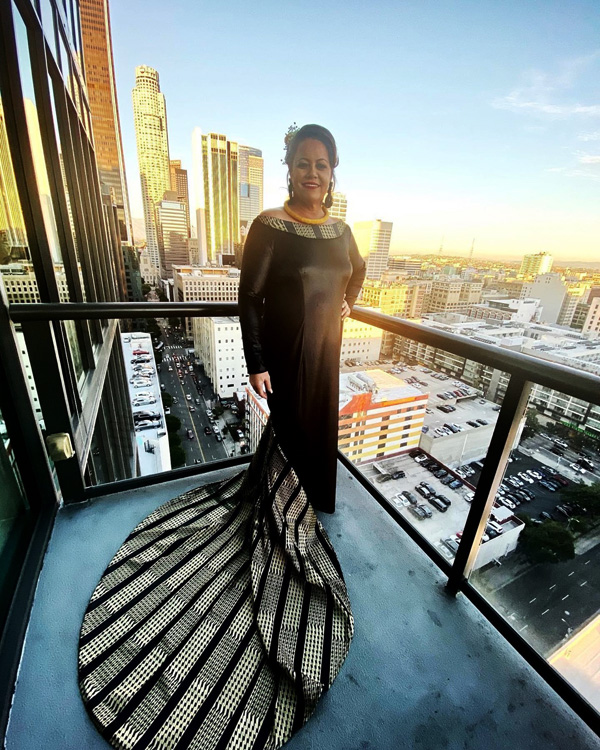 Amy Hanaiali‘i earned six Na Hoku Hanohano Award nominations, including Album, Song and Female Vocalist of the Year, for her latest recording, “Kalawai‘anui.” She is shown in the dress she wore to the Grammys in January.

“With this project I really wanted people to be moved, even those who don’t speak Hawaiian,” he explained. “With music you don’t have to understand the words, it’s deeper than that. Especially during this pandemic, I get messages all the time from fans, ‘your album is getting me through these hard times.’ The intention was to lighten up the load whatever you are going through in life.”

Primarily singing original songs on the album in Hawaiian with some Tahitian, along with a cover of Dionne Warwick’s hit “I’ll Never Walk This Way Again,” Tatofi early in his career was known for island reggae.

“Internally, it was a life change,” he says about focusing on Hawaiian music. “I wanted to find a place for myself in Hawaii, where did I belong? Once ‘Pua Kiele’ came out everything changed.”

Many Maui musicians were nominated this year including multi-Hoku-Award-winner Amy Hanaiali’i for her latest recording, “Kalawai’anui,” which received six nominations including Album of the Year, Female Vocalist of the Year, Song of the Year (“Kalawai’anui”) and Hawaiian Music Video; and Na Wai ‘Eha for their “Lovely Sunrise” collection of Maui mele, honored with five nominations.

A homage to her ancestors and her deep connection to past Hawaiian generations, Hanaiali’i’s Grammy-nominated “Kalawai’anui” featured tributes to Mauna Kea, Waimea’s legendary rain rock and the state’s natural wonders on “Hawai’i You’re My Home.” Five songs were co-composed with her cousin, Kumu Hula Micah Kamohoali’i.

“I’m really excited that my fellow entertainers love the album,” she said. “I’m really stoked. As an artist, you’re always trying to find inspiration, and I wanted to unlock my genealogy even more with this album, trusting your ancestors will guide you. I named it ‘Kalawai’anui’ because I wanted the three branches of my family to come together and understand their genealogy more.”

Currently serving as the president of the Hawai’i Academy of Recording Arts, Hanaiali’i has been working on securing help for unemployed musicians during the pandemic.

“My number one goal was to get medical for our entertainers,” she said. “We’re working with Queen’s hospital with a program we’re hopefully going to roll out by the end of the year for our Academy members. We do so many fundraisers for our fellow entertainers who passed away, because they don’t have medical.”

“We’re airing the most memorable moments back to Iz and C&K and the Makaha Sons, to the present,” she explained. “We’ll take in donations that can be allocated to our members, whether it’s their rent payment or car payment or medical payment, whatever help they might need.”

Adopting their name from the four great streams that flow from the West Maui Mountains, Na Wai ‘Eha’s Hoku nominations include Album and Group of the Year and Hawaiian Language Performance.

“We are so happy that our second album ‘Lovely Sunrise’ made it,” they posted. “We are truly blessed to be a part of this industry with so many amazing people. Mahalo Ke Akua for allowing us to do what we do.”

Group of the Year finalists also includes veteran Maui reggae band Ekolu for “20 Year Anniversary” and Ei Nei, with Wailuku born Dane Fujiwara, for their debut album “Hui!” Ekolu also is nominated for Single of the Year and Anthology.

Contenders for Hawaiian Slack Key Album of the Year include Jeff Peterson for “Ka Nani O Ki Ho’alu, The Beauty of Slack Key,” and George Kahumoku Jr. for “Renaissance Man.”

Three Maui artists are up for Reggae Album of the Year — Inna Vision, Justin Phillips and Maoli.

UH-Maui College music teacher Joel Katz is a finalist in four categories: Instrumental Album of the Year for “A Beautiful Sound of Hawaiian Steel Guitar,” Instrumental Composition for “My Friend,” EP (“Extended Play”) for a collaboration with Greg DiPiazza (plus backing vocalist Kelly Covington and saxophonist Rock Hendrix) on the country rockish “Steel Paradise,” and Alternative Album as a member of the glamrock outfit The Barbarellatones.

“I’m honored to have my name up there with great legendary players,” says Katz. “I love playing steel guitar and to be accepted in that circle is really an honor.”

Peter DeAquino also is nominated for Instrumental Album of the Year for “Six Fathoms Down.” Hawaiian Language Performance nominees include Kaniala Masoe with “Pa’a Mau.” Kaleo Phillips’ “Take Me Home” and Marvin Tevaga’s “Time To Be” are nominated for Contemporary Acoustic Album of the Year. Featuring an all star lineup of Maui entertainers, “Lei Nahonoapi’ilani: Songs of West Maui,” is up for Compilation Album of the Year.

Anuhea is a nominee for Single of the Year. Lanai’s Hawaiian Time is up for EP of the Year for “Lana’i On My Mind.” The trio Ahumanu is nominated for Island Music Album of the Year for “Kahi Aloha.” And Joseph Bomarrito gets a nod for Hawaiian Engineering for “Legacy: The Brown Family.”

Finally in the Graphics category, Anuhea and Colleen Wilcox were nominated for “A10/Best of Anuhea,” Waialani Artates and Kumu Micah Kamohoali’i for “Kalawai’anui,” and Daryl Fujiwara for Na Wai ‘Eha’s “Lovely Sunrise.”

The 43rd annual Na Hoku Hanohano Awards will be held Sept. 10 at the Hawaii Convention Center.

“Because of a bunch of things being canceled I really wanted to give everyone hope for something this year,” says Hanaiali’i. “If we need to postpone to October we can. We thought about having it like baseball games with no audience, but part of winning a Hoku is walking to the stage with everybody cheering and clapping. It’s such a magical time.”