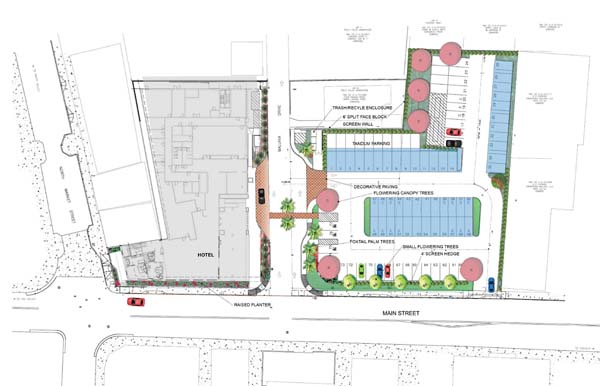 A map shows the location of the proposed six-story, 156-room Hotel Wailuku at the corner of Market and Main streets. Construction of the hotel will require the demolition of existing buildings on the parcels. HOTEL WAILUKU images

Even with travel down and the economy struggling during the coronavirus pandemic, a Wailuku landowner is moving forward with plans to build a 156-room hotel in Wailuku town.

Jonathan Starr, who is developing Hotel Wailuku along with wife Helen Nielsen, said that the hotel likely won’t open for another two years and that he expects business to resume by then.

“I don’t think I would want to open a hotel tomorrow or next week, but I certainly believe that two years from now it’ll make sense,” Starr said Sunday.

Geared toward “kamaaina business” travelers, the six-story Hotel Wailuku would be located at the corner of Market and Main streets. It would include a dining area, bar/lounge, laundry area, meeting rooms and administrative office space, as well as a small gym and small pool for exercise, according to Starr and the hotel’s draft plans. 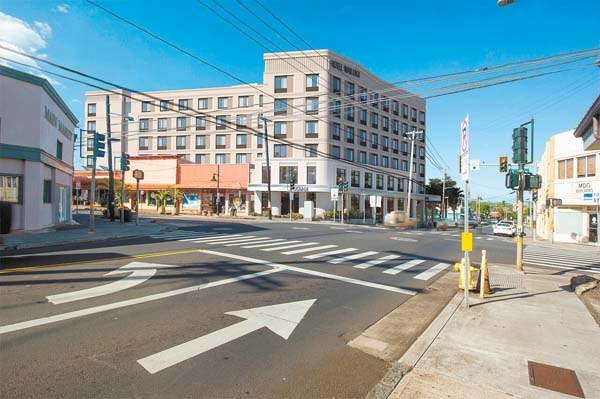 A draft rendering of the proposed Hotel Wailuku is pictured. The six-story, 156-room hotel would be located at the corner of Market and Main Streets.

A paved parking lot at the northeastern corner of Main Street and Maluhia Drive would include 78 stalls; 14 tandem parking stalls would also be provided. Guests arriving by car would enter the hotel’s parking lot from Main Street. A portion of Maluhia Drive will be widened to provide for two-way traffic flow and allow exiting hotel traffic to return onto Main Street, the draft assessment said.

Building the hotel would require the demolition of existing structures on the five parcels — totaling a little more than an acre — owned by Starr Properties LLC and Market & Main LLC. Current tenants include an auto sales company, art studio, retail outlets and specialty contractors, among others. According to the report, coordination with tenants is ongoing “to ensure a smooth transition upon termination of the respective leases.”

Starr said Sunday that about five businesses would be impacted. When asked whether he was concerned about displacing businesses during an economic downturn, Starr said that they were all on short-term leases of either month-to-month or a few months “and have been for quite awhile.”

“When you’re on the short-term tenancy, that’s what it is,” said Starr, who added that he would “rather not discuss individual leases.”

Construction of the hotel is expected to start in the fourth quarter of this year and take about 20 to 22 months, with operations starting in the third quarter of 2022, according to the draft assessment. Estimated construction cost is $36.4 million. 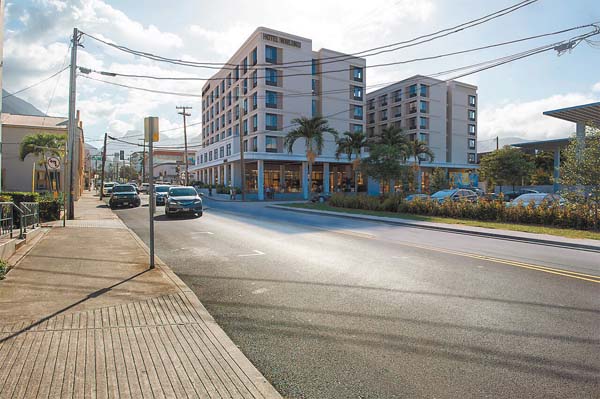 A draft rendering shows the east view of the proposed Wailuku Hotel along Main Street. At right is the proposed parking lot, which would include 78 stalls; 14 tandem parking stalls would also be provided.

Plans also call for the installation of about 210 feet of 12-inch waterline and related facilities, such as fire hydrants, within the Maluhia Drive right-of-way. The new waterline would replace an existing 4-inch waterline that would be insufficient to service the hotel.

The county Department of Environmental Management has also said that 356 feet of 10-inch clay pipe on Lower Main Street between Kaahumanu Avenue and Mission Street may not be able to accommodate wastewater from the hotel, and may need to be replaced with a 12-inch PVC pipe.

While some Wailuku business owners and residents have said they would welcome additional business, they’ve also expressed concerns about gentrification and the loss of Wailuku’s small-town character. During a Maui Redevelopment Agency meeting in November, nearly two dozen people showed up to testify against a proposal to increase building heights from four to six stories. The agency tabled the proposal at the time, and Starr said Sunday that he is still planning to seek a variance to allow the hotel to be built with six stories.

Starr said that the hotel wouldn’t necessarily bring an influx of people to the town, as there are already hundreds of people who travel to Wailuku for work or other reasons from their accommodations in West and South Maui. He added that he feels the pandemic has reaffirmed the need for a kamaaina business hotel like this.

“To me it’s kind of strengthened my belief that people who are coming to Central Maui for business and community type of uses, whether it’s for the hospital or the college or the legal (reasons) or to be near family and friends, it makes a lot more sense for them to be closer to where they need to be and to be able to shuttle from the airport when things get back to a more normal, everyday status,” he said.

Supreme Bright Wailuku LLC is listed as the applicant for the project but has a Lewisville, Texas, address. Starr explained that he and Nielsen, who are major partners in the entity, will be the owners and will be involved in the hotel, but that they are working with hotel professionals to manage day-to-day operations. The Texas-based company would hire people locally, Starr said. The hotel is expected to have about 65 employees and would also offer 24-hour front desk and security services, according to the draft assessment.

The project is open for public review at oeqc2.doh.hawaii.gov/Doc_Library/2020-05-08-MA-DEA-Hotel-Wailuku.pdf. More information is also available at hotelwailuku.com.

A map shows the location of the proposed six-story, 156-room Hotel Wailuku at the corner of Market and Main streets. Construction of the hotel will require the demolition of existing buildings on the parcels. HOTEL WAILUKU images

A draft rendering of the proposed Hotel Wailuku is pictured. The six-story, 156-room hotel would be located at the corner of Market and Main Streets.

A draft rendering shows the east view of the proposed Wailuku Hotel along Main Street. At right is the proposed parking lot, which would include 78 stalls; 14 tandem parking stalls would also be provided.

The Maui Arts & Cultural Center is inviting people to enjoy craft beer at home during a virtual version of its annual Brewers Festival on Saturday. Photo courtesy of MACC

HouseMart Ben Franklin employees gather around a sign that will be on an easel in the store to remind people of the new social distancing rules. Shown (from left) are Rene Kahaleanu, Maileen Harris-Akamine, Malia Ah Hee and Tim Terry.