As unemployment rises, church group serves 720 to 800 families a week 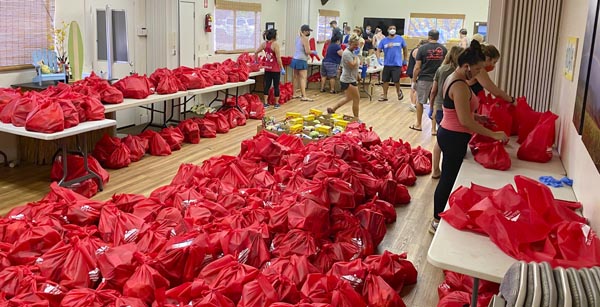 Volunteers gather at the Lahaina Baptist Church early in the week to organize food donations into hundreds of boxes and bags for the Lahaina Community Food Distribution. Photo courtesy of Jay Wright

Ever since COVID-19 shuttered businesses and residents became unemployed, west side church members and volunteers have ramped up food donations and deliveries for those in need.

For the past two months, Lahaina Baptist Church has hosted a Lahaina Community Food Distribution, serving between 720 and 800 families in need per week via a drive-thru grocery pickup.

“It’s incredible, but there’s two parts of it,” pastor and organizer Jay Wright said Tuesday after building food boxes from 10 a.m. to 1 p.m. at the church. “The first part of it is that we have local people and some from the Mainland that have been incredibly supportive, so we’re able to, when we see the need arise, purchase more food and get volunteers to put the food in boxes and distribute it — that’s great.

“Then on the other side of the coin is the heart-wrenching stories that we hear from really wonderful people that have been out of work eight, nine weeks,” he added. “These are wonderful people going through the worst part of their life.”

Located on 520 Waine’e Street, the church always had a small food pantry available, but it was only sizable to serve about ten people per week. 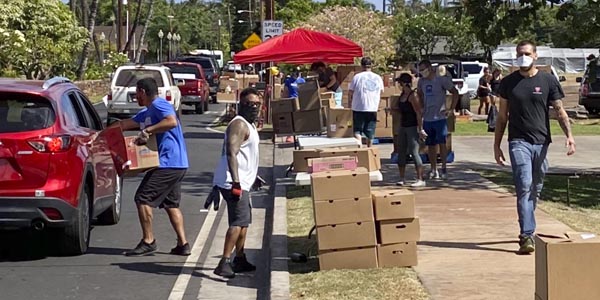 Cars wind down Wainee Street to pickup up a family-sized box of groceries distributed by the Lahaina Baptist Church. Photo courtesy of Jay Wright

Now, with the help of the Maui Food Bank and money raised by the church, Wright said that they serve up to 800 families at 9 a.m. every Thursday via drive-thru at the Lahaina Baptist Church, as well as 80 to 100 kupuna and shut-ins during weekly deliveries on Wednesdays and Fridays.

The Maui Police Department blocks traffic for the drive-thru stations, welcoming nine vehicles at a time for volunteers to quickly load boxes. Most weeks, Wright said that cars usually stretch two miles down the street.

The food bank provides about 200 family-sized boxes per week, while the church spends up to $5,000 at local grocery stores and Sysco Hawaii Wholesale to purchase additional produce and canned goods.

Wright said that Maui Cattle Co. was also providing enough portions for 300 boxes, including items such as ground beef and chilled milk.

The Lahaina Community Food Distribution will operate until the end of May but is having a meeting this week to discuss an extension into June to continue “to help the people in our community,” he said.

“We feel that there are a lot of people in despair and we want to try and build a bridge between hope and despair in the simplest way that we can by providing food,” he said.

For more information about the church or how to donate, visit lahainabaptist.com.

The 91 degree high Thursday at Kahului Airport tied the record for the day — the third straight day of ...