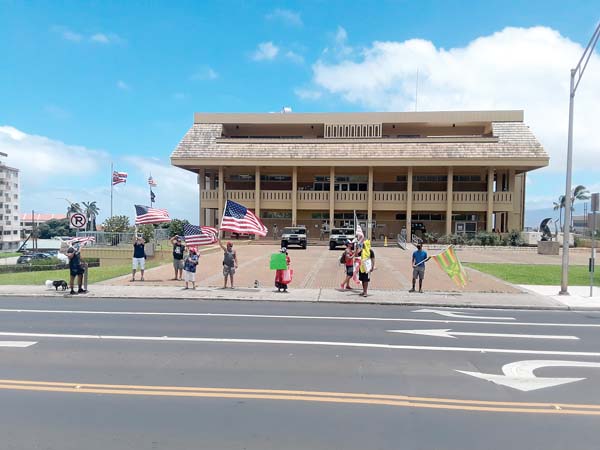 A group of about 20 protesters waved signs in front of the State Building in Wailuku on Friday at about 12:30 p.m. KEVIN J. OLSON photos

Opposition to the coronavirus emergency orders are beginning to go public with a protest of about 20 people in front of the State Building in Wailuku and a letter from well-known local business leaders asking Maui County Mayor Michael Victorino to start opening up the economy.

“If we act now and put together an aggressive plan to restart the Maui economy as well as minimize health risks, then businesses can begin the process of contracting vendors, employees, customers and preparing to smoothly transition and reopen,” the letter to Victorino dated Thursday said. “We are facing an economic meltdown due to the shutdown.”

The letter notes the reduction in coronavirus cases since the outbreak was identified in March and thanked the mayor’s administration for “its hard work and leadership to protect our community during the crisis.”

“But is has become clear that the status quo is not economically or socially sustainable, even in the short term,” the letter said. “The stress of economic devastation and curtailed civil liberties could one day soon become untenable.” 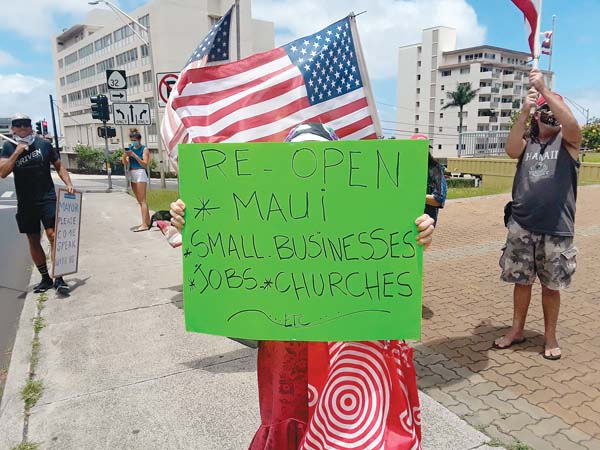 Byron Brown said Monday that he has made two calls to Victorino’s Chief of Staff Tyson Miyake and is awaiting a return call about the letter. He emphasized that local businesses can be reopened while maintaining public safety.

“We kind of have to begin something,” he said, noting that “it’s not going to be immediately great” without tourism. “We are going to be at 30 percent max” but local businesses “need a shot.”

Regarding the protest Friday, about 20 people gathered in front of the State Building to express their opposition to the emergency orders. Signs read “I Do Not Consent To This Lockdown: Demand Full Disclosure,” “Open All Of Maui Now,” and “Re-open Maui, Small Businesses, Jobs, Churches.”