COVID-19 stops the music for obon 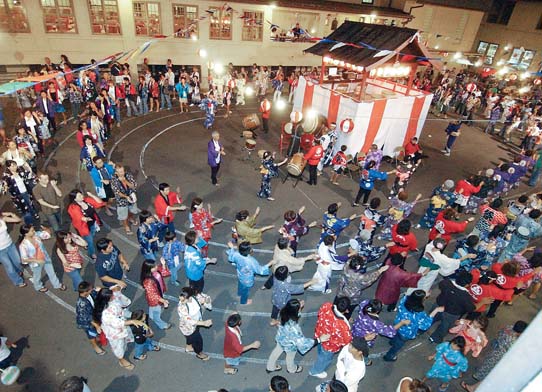 The summer obon festivities have been canceled this year by island temples due to the coronavirus pandemic. Temples like Wailuku Hongwanji, shown here during bon dancing, will be taking a financial hit and will have to figure out other ways to hold services for those who recently passed. — The Maui News / MATTHEW THAYER photo

The local summertime tradition of the bon dance, with its crowds of people eating chow fun and shave ice and talking story while watching dancers move rhythmically to the beat of the taiko drum, will be missing this year because of COVID-19.

With outdoor gatherings limited to 100 people and social distancing rules still in place, Buddhist temples that hold the obon festivals — traditionally a time to remember ancestors who have passed — say there will be no dancing, no large temple gatherings and no walk-up food sales, which can attract hordes of people waiting in line.

The festivals are also fundraisers for the temples and related organizations, such as judo clubs and Scouting programs.

“It’s one of those things, everyone is really sad we can’t have obon,” said the Rev. Kerry Kiyohara of Makawao Hongwanji Mission on Tuesday.

Kiyohara, who is originally from Los Angeles, said that in Hawaii the bon dance is special for the whole community because it allows people to come together and enjoy the camaraderie, dancing, food and colorful festivities.

“It’s a local summer tradition,” said the Rev. George Kitagawa of Wailuku Shingon Mission. “It doesn’t matter if you are Buddhist or not.”

Kitagawa said that instead of having the large dance, food sales and special temple service associated with obon, he will hold three small prayer services for families in August.

He said his temple and others rely on obon, which attracts hundreds of people every year.

“Big or small (temples), I think obon is one of the biggest fundraisers that we all have,” Kitagawa said Thursday morning. “Not having that makes a difference.”

He estimated that obon accounts for nearly half of the temple’s annual fundraising. Throughout the year, the temple also makes steamed manju and local-style mochi wrapped in ti leaves to sell, but the pandemic also shut down those efforts.

“Overall, it’s not an easy situation. We are going to try and see how this is going,” Kitagawa said of the temple’s finances and the possibility of more fundraising efforts.

It’s the same at Makawao Hongwanji, where Kiyohara said he cut his cable TV subscription to save money, noting he doesn’t watch TV anyway. Electricity use is also down, thankfully, since there have not been many gatherings at the temple.

With obon canceled, Kiyohara said affiliate organizations, such as the Scouts and the Judo Club, will miss out on the opportunity to raise funds this year, though donations can be made to those groups via makawaohongwanji.org.

But the real hit to the Makawao temple is the loss of its annual garage sale that happens on the Fourth of July weekend along with the annual Makawao Rodeo and parade. Those events have been canceled due to the pandemic.

Kiyohara said the garage sale made up 30 to 40 percent of the temple’s operating budget. However, he said people have been donating funds to the temple and during virtual services, which attract viewers worldwide.

Kiyohara said the thing his congregation said people would miss most about obon was the food.

“Everyone has stepped up to do this.”

Makawao Hongwanji will be opening up presale orders for some of its popular obon foods.

“We can try to give the people something,” Kiyohara said.

The temple will begin taking orders next week for its famous chow fun ($8 a quart), sweet potato manju ($5 for five in a box) and 8-ounce jams (two flavors, guava and peach, $6 each). To order, call 572-7229. Online ordering will be available. Information will be provided at makawaohongwanji.org. The closing date is July 18.

Pickup will be from 10 a.m. to 2 p.m. July 25, or what would have been one of the temple’s obon days. The temple will offer drive-thru pickup with no-contact service while videos of obon memories are shown, Kiyohara said.

“At least people can get their foods associated with obon,” he added.

And, from 7 to 9 p.m. that same day, memorial obon lanterns, or chochin, will be lit and feature the names of those who have passed. Donations can be made to the temple to get a loved one’s name on a strip hung on the lantern. People may drive by to see the lanterns but are asked to remain in their vehicles, Kiyohara said.

Kitagawa’s Wailuku temple is also thinking about food sales to coincide with its family services in August.

While there will be no dancing or socializing, temples across Maui will still hold services associated with obon. They are called Hatsubon memorial services and are for families who are marking the first obon since the passing of a loved one. The ceremony has special meaning in the Jodo Shinshu tradition and normally precedes the dancing at temples.

Makawao, Kahului and Wailuku Hongwanji, as well as Kahului, Lahaina and Wailuku Jodo Missions and Paia Mantokuji Soto Zen Mission all plan to have Hatsubon services for families.

Wailuku Hongwanji minister, the Rev. Shinkai Murakami, said he will stagger times at his mission to allow the Hatsubon services to meet social distancing guidelines.