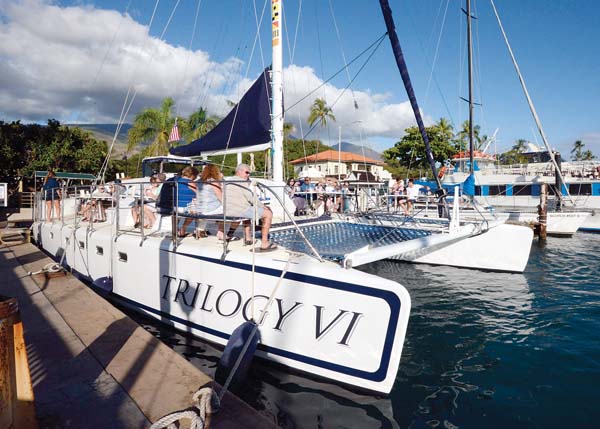 Larger commercial tour boat operators, like Trilogy Excursions, will not be able to take advantage of the latest easing of COVID-19 rules. The state Department of Land and Natural Resources allowed the resumption of commercial ocean activities, but with a 10-person limit on boats. The Maui News / MATTHEW THAYER photo

Despite the state’s decision to begin to allow commercial ocean activities again, the leader of a group of ocean tourism operators said Thursday that it’s still “not realistic” for larger tour boat and watersports companies to reopen because of the 10-person limit per vessel and other COVID-19 health and safety guidelines.

Smaller businesses in the industry, including surf schools and kayak rental companies, are more likely to reopen under rules announced Wednesday by the state Department of Land and Natural Resources.

“We would like it to be that companies that would like to start, which are primarily the very small ones, will have the opportunity to do so,” said Ocean Tourism Coalition President Jim Coon, who is also the co-founder of Maui’s Trilogy Excursions. “But the larger companies can postpone their starting until there’s an environment that they can actually possibly run a trip because with the current rules, with only 10 people max on a boat, there are boats that take over half of that just for the crew.

“It’s just challenging for us.”

Coon said that the ocean recreation industry is grateful that Gov. David Ige and the DLNR are starting the process of reopening Hawaii, but “it’s just not doable at all” for larger operators.

“We do appreciate the governor restoring the ability for us to reinitiate the permits . . . it’s a start,” he said. “It will work for the very smallest of the operators, and we’re happy for them, but it doesn’t work for the vast majority of the industry.”

The 10-person limit includes both passengers and crew members, which for most large capacity boats, is not financially viable, he said. The capacity can be exceeded if everyone is from the same household, according to the DLNR.

Trilogy’s boats hold 40 to 60 passengers while operating out of Lahaina and Maalaea small boat harbors. Some vessels and charters can host as many as 150 people at a time, and some provide food services, Coon said.

“So it’s just not realistic for most of the larger boats statewide to even consider working with the local community” with the tourism industry shut down, he said. “We were hoping to do that, but we can’t even accommodate the local community with those kinds of numbers.”

Coon and his brother, Randy, started Trilogy Excursions in 1973 and have offered tours to Molokini, Kaanapali, Olowalu and Lanai, as well as snorkeling, whale watching, sailing and dinner cruises.

Business was “the strongest it’s ever been” for the ocean tourism industry before the pandemic hit in March and shut down the economy to only essential businesses. Ocean activities operators were not considered essential and had to close in mid-March. It may not have mattered much with hotels shuttered and the tourism industry shut down.

“2020 was looking to be the best year for our industry,” he said. “Every one of us was doing well, and we were just coming into the start of the big spring break, and we were all booked up a week in advance. We were excited, it was good.”

When Trilogy is back operating, Coon said that staff and crew members are prepared to meet Centers for Disease Control and Prevention guidelines, such as maintaining social distancing, wearing face masks and washing hands frequently.

Customers have been calling to book reservations with the Trilogy for next year in hopes that COVID-19 will have disappeared, he said, but his company currently does not have any reservations.

Coon said knowing a firm resumption date for tourism would be helpful.

“We can’t just start on a dime, it’s very difficult for us to restart our businesses,” he said. “We need to know when that’s going to happen and how, so we can make our plans accordingly.”

He said that the larger boat companies “will not be able to open their doors” until tourists return to Hawaii.

“I think every company across the state would agree with that, and not knowing how long we have to hang on is hard,” he said.

Other suggestions he offered included state regulations on ocean recreational activities based on the size of the boat and having boats operate under health and safety protocols currently imposed on the food industry.

“That could be the closest model that we do similarly,” he said. “I think we can work under the same guidelines that restaurants are.”

Coon said that if it was even slightly possible to reopen Trilogy Excursions, get employees back on the payroll and break even, he would. However, it’s not profitable at this time with the 10-person limit and minimal visitor traffic.

A few surf schools and rental companies contacted by The Maui News on Wednesday and Thursday still were processing DLNR’s recent announcement.

Alan and Patti Cadiz, co-owners of Hawaiian Sailboarding Techniques, one of the oldest windsurfing schools on Maui, said they still are seeking clarity on the guidelines while remaining in contact with Mainland clients.

Kim Ball, owner of Hi-Tech Maui, said that the easing of commercial watersports rules will not significantly impact his business, which sells merchandise and watersports equipment and offers ocean rentals. He anticipates little change for watersports rental companies until the tourism industry reopens.

County Managing Director Sandy Baz said Thursday that county Commercial Ocean Recreational Activity permit holders that operate at county parks will need to wait to resume operations. The operators have to provide a certificate of insurance and other information to the parks department.

He added that permit holders would not be able to operate Sundays and holidays per current county rules.

* Staff Writer Melissa Tanji contributed to this report. Dakota Grossman can be reached at dgrossman@mauinews.com.