Over 400 gather to March for Change 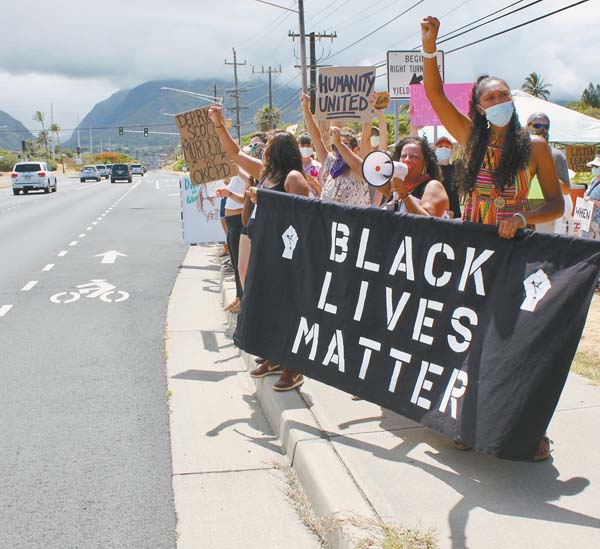 In a matter of days, the pair organized a March for Change on Sunday afternoon that started at War Memorial Complex and ended at University of Hawaii Maui College.

“It was sitting down for too long, I think that’s what the inspiration was,” Liu said of the need for change and spreading awareness of the Black Lives Matter campaign. “Seeing more than just us saying that we matter, I think that’s probably the biggest thing, is knowing that it’s not just us wading in the water anymore, you know, everybody is in with us, and I want change.

“I got a son, and I don’t want him dealing with what I dealt with.”

Under the hot afternoon sun, protesters in their face masks waved signs, chanted “Black Lives Matter” and played music in support of the campaign, as well as encouraging cars to honk their horns. A few Maui Police Department officers helped the parade of marchers cross several intersections during their walk to the college. 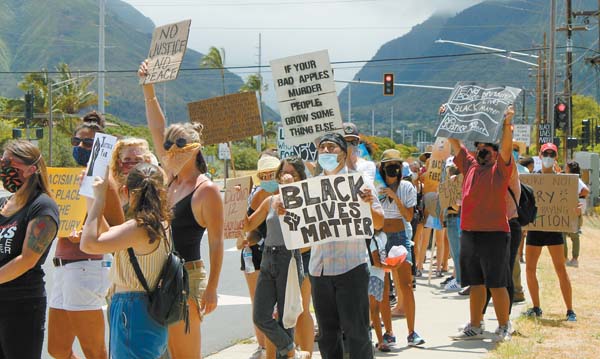 About 400 supporters of the Black Lives Matter campaign march down Kaahumanu Avenue, rallying together for justice, peace and systematic change.

When Liu looked around at all the people lining the street, tears came to her eyes.

“I’m a little overwhelmed,” she said. “I actually haven’t looked at how many people are here, it’s a lot of people. I think it’s just overwhelming to have all these people here. On Maui, we have a really small population of Black people, our Black community is really small, so to have all of them showing up for us, it means a lot.”

Liu wore her kente dress because “I just wanted people to know where I come from.”

After seeing the multiple Black Lives Matter protests on Hana Highway these past few weeks, Liu wondered who was organizing them and was eventually led to Marquez, a current UH-Maui College student.

“My son, right after George Floyd was murdered, asked me ‘mama, how do I manifest not getting shot by the police?’ and he was the first one to gather the first protest on Hana Highway, and we put the call out, and two days later everyone showed up,” Marquez said. “After that, I wanted to keep the momentum, and even though we are a small community and the Black community is fairly small, we still have a voice, and I wanted to make sure that we made a stance.” 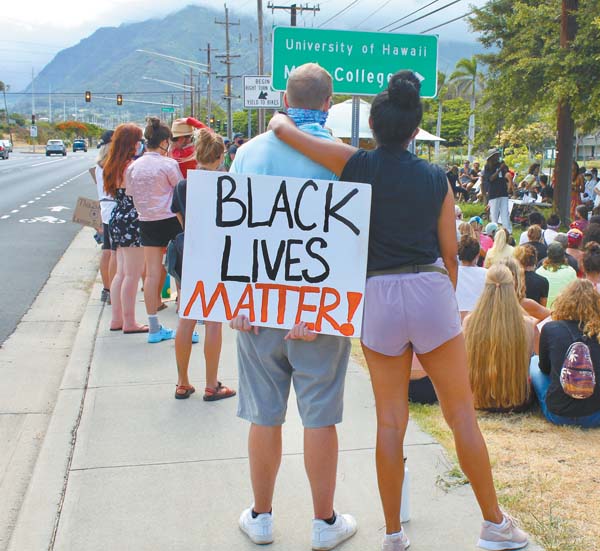 Organizers say that recent killings of Black people at the hands of police officers are not one-time incidents, but a “symptom of the systemic racism” that is deeply rooted in the nation’s legal practices and laws that deny basic human rights to the Black community.

Earlier this week, Liu said that this march will be “deeply personal for both of us” due to their biracial backgrounds and experiences based on skin color. When the day finally came, the community support was much more than they anticipated.

“I wanted to make sure we marched for change and police reform,” Marquez said. “I really had no expectations for today. I just want to really put my love out there. This is way more than I expected.”

Some protesters told The Maui News on Sunday that they saw the march being advertised on Instagram and wanted to join in support of the movement. Others said they wanted to bring awareness to the systemic injustices found in the legal system and held signs with a list of victims’ names, including George Floyd, Breonna Taylor and Ahmaud Arbery. Floyd’s death, which happened while in police custody in Minneapolis on May 25, has spurred protests nationwide.

Signs included phrases like “Silence is Violence,” “Hawaii for BLM” and “Racism is a Pandemic.”

“I first heard about police misconduct when I was in law school, like 30 years ago, and it has not gotten any better. In fact, I would say it’s probably worse,” Kihei resident Beth Sadler said. “I’m here primarily because of the inequities in the judicial system, meaning that race is a huge factor in everything from arrests, search and seizures, all the way up to sentencing and appeals, and so I guess I’m coming out from a legal perspective.”

Around 2:30 p.m., the crowd joined together in listening to Martin Luther King Jr.’s “I Have a Dream” speech on a loudspeaker and a few songs, including “Wade in the Water.”

“I frequently find myself in situations where people question my African-ness or whiteness, but I’ve learned that being me and not a label will always be a challenge,” Marquez said in a closing statement to the group. “Mixed, biracial, half and half, or cream coffee, or however people classify me, I feel an obligation to bridge cultures and promote tolerance and understanding.”