State DLNR, DOH asks for public to be patient, informed 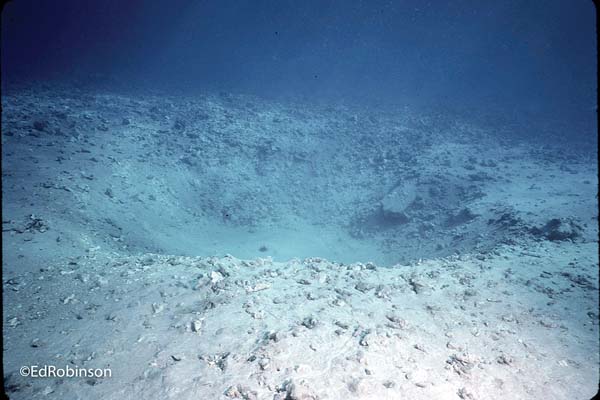 This bomb crater was left after the U.S. Navy detonated a WWII ordnance found at Molokini in September 1984. ED ROBINSON photo courtesy of Mike Severns Diving

Environmentalists, community members and lawmakers have expressed concern over the handling of unexploded WWII ordnance off Molokini and are opposed to detonating the devices in place for fear of possible irreversible damage to coral reefs, ocean life and the island itself.

The state Departments of Land and Natural Resources and Health, the U.S. Navy and other agencies are mulling possible ways to quickly and safely remove two WWII-era bombs in the Molokini Marine Life Conservation District.

State officials say that no final decisions have been made yet, but the two potentially explosive devices are more than 70 years old and pose a serious risk to the public.

“The agencies are considering public safety impacts, impacts on recreational and commercial boating and impacts to the aquatic environment,” the DLNR said in a statement last week. “At this time, there are no firm dates or final plans for any operations to remove” the ordnance.

“The public will be informed in advance of any such operations,” the statement said. 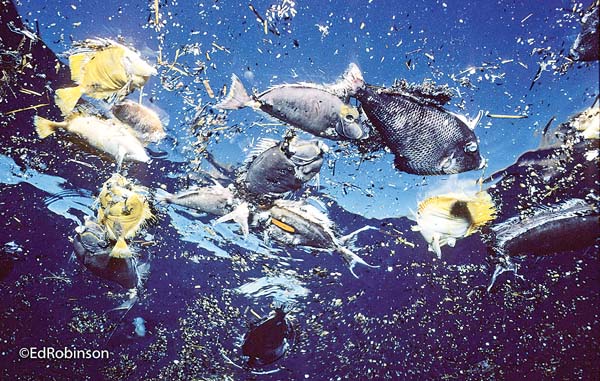 Dead fish float on the surface after the U.S. Navy detonated an old WWII ordnance at Molokini in 1984. ED ROBINSON photo courtesy of Mike Severns Diving

Initial information about the Molokini ordnance was revealed in a November news release about old explosive devices coming to the attention of the Department of Health, the DLNR said.

State officials have been warning boaters, divers and tour operators since last year about the unexploded ordnance and the threat posed if disturbed. Specialized disposal teams from the U.S. Army Corps of Engineers have been removing about 185 potentially hazardous items from waters off Kahuku and Laie on Oahu’s North Shore.

No injuries or deaths in the state have been attributed to unexploded ordnance since 1983, when two Schofield Barracks soldiers were injured during a military exercise on Parker Ranch land near Pu’u Pa’a on Hawaii island, and in 1971, when a teenager from Hawaii island died in an explosion when he handled and attempted to dismantle an unexploded ordnance found at Pohakuloa Training Area, according to the November news release.

Local residents and officials contacted by The Maui News on Monday were opposed to the blow-in-place tactic. Some suggested alternatives, like leaving the bombs alone or removing the ordnance without detonating them.

“I beseech the Navy to use imagination, thought, care and consideration, and not take the easy way out and detonate this ordnance adjacent to some of the healthiest and most famed coral reef in the state,” said state Rep. Tina Wildberger of South Maui. 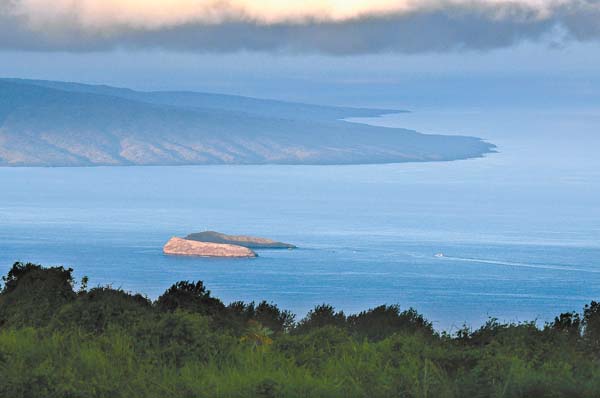 A view of Molokini Crater is shown in this 2018 photo. After Molokini became a state preserve in 1977, the reef and fish have made a slow recovery, according to Mike Severns Diving company. The Maui News / MATTHEW THAYER photo

The military used Molokini Crater for bombing practice when the United States entered World War II. In the 1970s and ’80s, unexploded ordnance from WWII was detonated in the crater off South Maui.

“With all the technology available to the United States Navy, I submit that an alternative to bombing Molokini — which is exactly what detonating the ordnance is — needs to be found,” she said. “The damage that would be done would be irreparable.”

It will take decades or more for Molokini’s habitat to recover from detonation of the devices in place, University of Hawaii marine scientist Alan Friedlander said Monday.

“To detonate them in place would be an utter disaster based on previous detonations there, they’ve just completely obliterated the reef,” said Friedlander, director of the Fisheries Ecology Research Lab at UH. “I think if they want to try and remove them without detonating them, I think that’s a great idea.”

In fact, Friedlander has seen ordnance on the backside of Molokini during a research dive, noting that there would be “too much collateral damage” with the proposal to detonate the bombs in place.

Makena-La Perouse resident Azizi Kaiama-Bonnette said two bombs going off would contaminate the Molokini habitat, as well as more than 200 acres beyond the island on the backside of Maui, parts of the Makena shoreline and Hana.

Bonnette said that officials need to let nature take its course, adding that “it’s ignorant, foolish, a repeat of the past” to detonate the bombs.

“Why poke the bear when it’s sleeping comfortably?” she said. “The chain effect of the old bombs is not worth the risk to poke at one bomb just because a fisherman might pick a bomb up. No way. This is dangerous and will destroy the reef food.

“My people gather and (have) cultural rights, and we will not be able to fish for months and months.”

Hawai’i Wildlife Fund Executive Director Hannah Bernard said she didn’t know about the possible removal of the ordnance until she received word through the community.

She expressed concerns over the lack of public input and proper protocols and consultations about the potential impact to marine species around Molokini.

“The community should have been involved and notified and had an opportunity to at least discuss this with the Department of Health and Navy instead of hearing about it through the coco wireless and then having to confirm it all the way to the chair of DLNR ourselves,” Bernard said Monday.

She reached out to federal agencies to see if they were consulted as part of the Endangered Species Act, which requires federal entities to ensure their actions do not damage or destroy endangered species and adversely impact surrounding habitats.

On Monday, the National Oceanic and Atmospheric Administration Fisheries said that it had in fact advised the Navy’s Explosive Ordnance Disposal department about collaborating and acknowledging laws that are in place to protect the environment.

“NOAA Fisheries is aware of the proposal to remove munitions from the Molokini area, and we have advised the Navy EOD that they need to consult with NOAA on the effect of this action on federally protected species under the Endangered Species Act, the Marine Mammal Protection Act, and on Essential Fish Habitat, even when they are acting on an emergency request from the state,” said NOAA spokeswoman Jolene Lau. “NOAA is not clear if Navy EOD intends to proceed without consulting.”

Lau said that “NOAA is aware that the unexploded ordnance may pose a danger to people that visit Molokini, and NOAA advised the Navy EOD that there are mechanisms to address such emergencies while also meeting the substantive requirements of these environmental laws.”

Since news of the possible detonation of the bombs began recently, petitions and conversations about protecting the island and seeking alternative options have been circulating the internet.

A change.org petition organized by recent Seabury Hall graduate Ameera Waterford has garnered almost 41,000 signatures in two days. The petition asks state and federal agencies to “please explore every alternative, seek additional public and expert input, and continue to be transparent in your plans.”

Waterford told The Maui News that she created the petition Saturday morning and was “surprised” how quickly the community responded.

“So many people have shared it through social media,” Waterford said Monday. “It’s amazing to watch the support grow.”

Before she went to bed Saturday night, the petition had about 2,000 signatures. By the next morning, there was roughly 7,000.

Mike Severns Diving company started another petition on savemolokininow.org and has collected more than 4,000 signatures so far. Dive instructors say that the response has been “overwhelmingly in opposition” to detonating the bombs in place.

After Molokini became a state preserve in 1977, the reef and fish have made a slow recovery, the company said. The island is now used primarily as a regulated tourist attraction for snorkeling and diving.

Dive master Pauline Fiene, who has made about 10,000 dives off Molokini and Maui in the last 33 years, said past detonations have shown the reef “obliterated into a fine powdery dust” with no growth in the area. The shock wave from the explosion killed thousands of fish, which were found dead on the bottom and floating around Molokini.

There also is concern for the endangered hawksbill sea turtles, Hawaiian monk seals and bottlenose dolphins, which are known to frequent the area, Fiene said.

“Molokini is a special place to so many people,” she said. “It is an iconic landmark for Hawaii, and if this plan is allowed to proceed, the scars will be visible for generations.”

On Monday night, DLNR responded to the reaction on social media to plans to “blow up Molokini,” as some have characterized.

“We continue a careful and deliberative process to identify the best strategy to render this unexploded ordnance (UXO) safe while protecting the marine environment,” said DLNR Chairwoman Suzanne Case. “This process began more than six months ago, and no final decisions have been made and will not be made without public engagement. It’s important we hear from stakeholders.”

Prior to the COVID-19 crisis, Molokini’s underwater life attracted hundreds of thousand of boaters and snorkelers each year, she said.

“In no way do we, as the agency responsible for the protection of Hawaii’s natural resources, want to agree to anything that might create unmitigated damage,” said Case. “Conversely, we must be mindful of the potential hazard to human health and safety this UXO can pose,” Case said.

Balancing public safety, while providing a high level of protection for the aquatic environment, “are the overarching considerations being discussed” by the state Departments of Land and Natural Resources and Health, the news release said.

“The state agencies are asking people to be patient, to let the process continue, and to arm themselves with accurate information, in order to knowledgeably contribute to the upcoming public discourse about how to render UXO around Molokini safe,” the news release said. 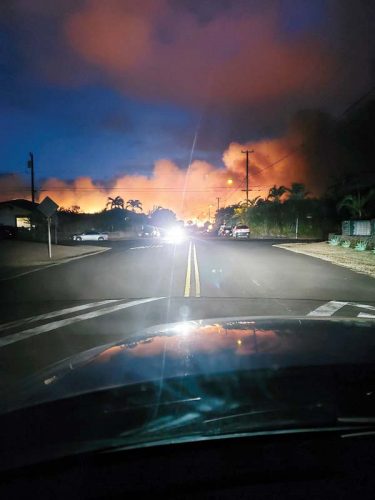