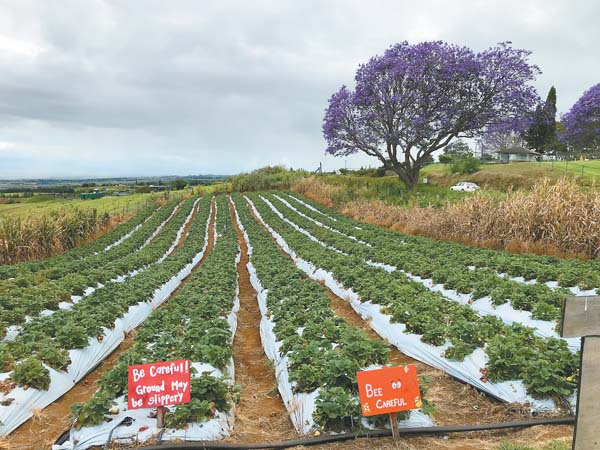 The Maui County Council’s Governance, Ethics and Transparency Committee on Tuesday voted to recommend to the full council to place a charter amendment on the general election ballot to establish a county Department of Agriculture. This photo shows the Kula County Farms strawberry fields taken May 12. The Maui News / MELISSA TANJI photo

A Maui County Council committee on Tuesday recommended approval of a charter amendment, calling for the establishment of the county Department of Agriculture, to be placed on the November ballot.

After listening to testimony last week on the pros and cons, the council Government, Ethics and Transparency Committee reconvened Tuesday and voted 6 to 3 in favor of placing the amendment on the general election ballot.

The proposal now heads to the full council, with first reading set for July 10. It needs two readings to be placed on the ballot.

But those opposed argued that the department just created another layer of bureaucracy for farmers, about the cost of the department amid tight coronavirus-era budgets, and that more discussion was needed, especially with an amended version introduced after last week’s meeting not being vetted by the Maui County Farm Bureau and other agricultural groups.

The committee Tuesday voted on the amended proposal introduced by Council Member Shane Sinenci, the author of the proposal to establish the department.

Sinenci’s amendment removed detail from the amendment and sought to create a general framework instead. Those details, such as qualifications of the director, could be decided later. He said the amended proposal would allow the mayor, council and farming community time to discuss all matters and work out the details of the department if it is approved by voters.

“Members, we received over 1,700 signatures in a petition that supports a Maui County Department of Agriculture and another 150 written testimony in favor of strengthening our agriculture center,” said Sinenci.

Committee Chairman Mike Molina, who voted in favor, said the proposed amendment brings affirmation of respect for this “critical industry.” He said we lost big agriculture on Maui.

“We have to look ahead,” Molina said, noting he appreciated the concerns over costs of the department.

About the costs of establishing and running the department, Sinenci told The Maui News last week that he envisioned a smaller department to start, which could cost as low as $700,000 to establish and operate on a budget under $2 million in line with smaller departments.

“I see it more of an investment and investing in our future,” Molina said. “If we are serious in agriculture, this is one small step to take.”

Hokama said he had received calls from people in the agriculture community, including ranchers and members of the Hawaii Farmers Union United, since the June 23 meeting on the amendment.

Sugimura said she felt more discussion was needed, noting that all sectors of the agriculture community were not informed of Sinenci’s latest amendment. She added that the Maui County Farm Bureau has suggested expanding the agricultural specialist position in the Mayor’s Office and establishing an agriculture office, which could help with grants and marketing, land management and other issues.

“This proposal lacks the amount of analyses required to determine what this will cost to residents, the function and responsibilities of the department, and what other essential initiatives will be cut in order to fund this new department,” he said in a statement.

The mayor said that federal and state governments already have agriculture departments and “this proposal seeks to create a new department whose main function is simply to interpret related state and federal laws.”

Victorino argued that it would be better to wait until the formation of the Charter Commission in 2021 to “make recommendations for amendments of this magnitude.”

“It is a disservice to the residents of this county to put questions on the ballot that aren’t thoroughly vetted,” he said.

“It is reckless for the council to propose any changes to the county’s organization without properly analyzing how the amendments will benefit the economy, efficiency and services of this county,” Victorino said.