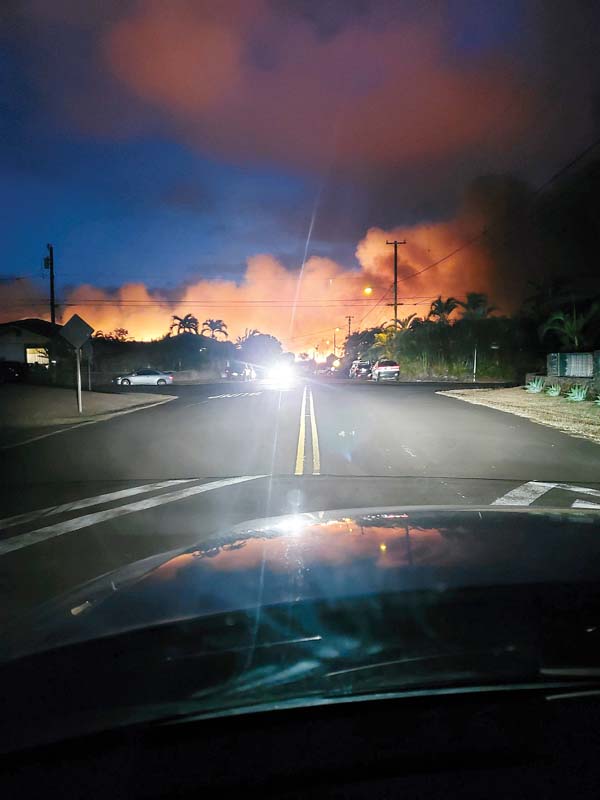 A fire that started in Haliimaile glows in the distance on Wednesday night, as seen from Skill Village. Residents were advised to prepare for possible evacuation but were able to stay in their homes. ROD ANTONE photo

A fire that came within half a mile of Skill Village had grown to 4,300 acres and was 75 percent contained as of Thursday afternoon, according to the Maui Fire Department.

The blaze, which began late Tuesday night in Haliimaile, had damaged numerous utility poles in the area but no other structures. Skill Village residents, who’d been warned late Wednesday night that they might have to evacuate, were able to stay in their homes, and Fire Services Chief Rylan Yatsushiro said Thursday afternoon that no homes were under threat.

“We utilized dozers to cut a firebreak, which stopped it,” Yatsushiro said.

On Thursday, crews were continuing to use heavy equipment to cut breaks around the perimeter of the fire, while all other resources were working on securing the perimeter. The Fire Department said that crews planned to work through the night to contain and monitor the fire.

Yatsushiro said the cause was still unknown but that it was not related to the wildland fire training that the department conducted Tuesday. 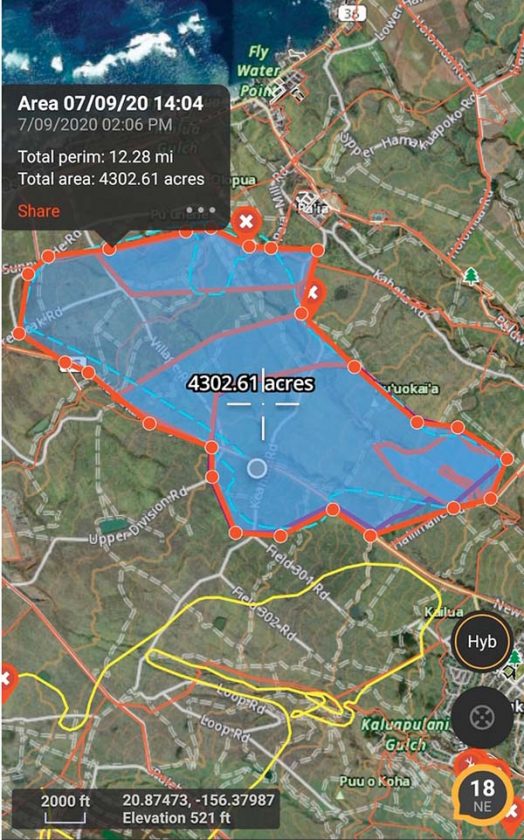 “It was a totally different location,” he said, adding that the training took place on the south side of Haleakala Highway, below Keahua Road. The fire was first reported at 11:30 p.m. Tuesday on the makai side of Haliimaile Road near the Maui Trap & Gun Club range, about 2 miles away from the training location, Yatsushiro said.

High winds on Wednesday created challenging conditions for firefighters and fueled the blaze, and on Thursday, clear, strong trade winds persisted, estimated at 20 mph with higher gusts, the department said.

The fire came less than half a mile from Skill Village, according to Yatsushiro. Resident Rod Antone said “it looked like it was in the cane field right next door,” but that wind conditions were better than in previous fires.

“I didn’t necessarily feel in danger because of the prior fire where the smoke was blowing towards us . . . that was way more concerning,” he said Thursday. “But this one, it was nighttime, it was a very bright fire, and we all came out of the house to watch it burn after a while. But otherwise, the wind wasn’t blowing. It wasn’t pushing towards us.”

Antone said he also texted a neighbor who works for the Fire Department and was monitoring the progress.

“My son and I stayed up watching Netflix for as long as we could,” Antone said. “I would go out every once in a while to see if it was getting closer, which it wasn’t.”

Employees at the HC&D quarry and the Central Maui Landfill were evacuated Wednesday as a precaution. Yatsushiro said he did not expect any more evacuations, with the fire 75 percent contained. Crews would be mopping up and securing the perimeter through the night.

The fire shut down several Upcountry roads, including Haliimaile Road, Haleakala Highway from Makani Road to Hana Highway and Pulehu Road between Hansen and Omaopio roads. Haliimaile Road was the last to reopen by 9:40 a.m. Thursday, according to Maui police.