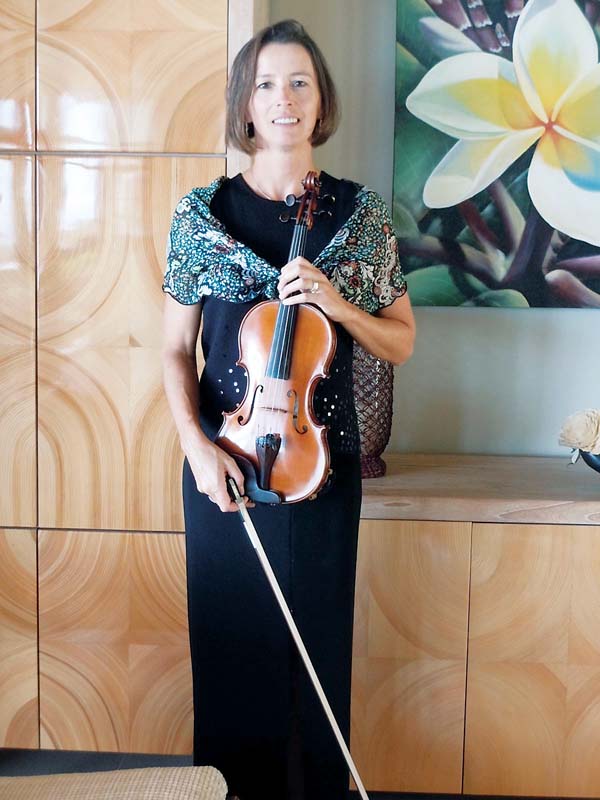 Lahaina resident Rona Landrigan is the concertmaster of the Maui Pops Orchestra. The 50-plus-member orchestra will perform with Keola and Moanalani Beamer at the annual Winter Pops concert in the Maui Arts & Cultural Center’s Castle Theater on Feb. 23. Photo courtesy Rona Landrigan

Rona Landrigan was barely 3 years old when she fell in love with the violin. She recalls listening to her grand-father play the string instrument — and being transfixed by its soul-stirring sound.

“I was completely fascinated,” she said.

So much, in fact, that Landrigan’s mother bought her a tiny violin at a music shop in her hometown of Glasgow, Scotland. Landrigan didn’t know how to play the pint-sized instrument, but toted it everywhere: play dates, doctor’s appointments, the grocery store — even the dinner table.

She took her first violin lesson at the age of 5, and two years later, joined her school’s orchestra. In the years that followed, she played with several youth orchestras, including the National Youth Orchestra of Great Britain and the National Youth Orchestra of Scotland. She went on to earn an undergraduate degree from the Royal Northern College of Music in Manchester, England, and completed her post-graduate study in violin performance at the Royal Scottish Academy of Music and Drama in Glasgow.

In 1991, Rona received an invitation to join the Camerata Orchestra, a 22-piece string orchestra headquartered at the Athens Concert Hall (also known as Megaron Mousikis) in Athens, Greece, where she played for four years. The orchestra performed regularly in Athens and also toured Greece, Belgium, Italy and Austria.

While in Athens, Landrigan met her future husband, and in 1996, the newlyweds moved to New Jersey. There, Landrigan made her mark on the local music scene, both as a performer and teacher. For 11 years, she nurtured a lifelong love of music as an elementary school and high school orchestra director and string specialist. Landrigan’s passion for teaching did not go unnoticed; in 2004, she received an outstanding educator award from The College of New Jersey.

By 2011, the Landrigans had become regular visitors to Maui; they’d squeezed as many trips as possible into their busy schedules. That year, she was invited to play with the 50-plus-member Maui Pops Orchestra at its annual Holiday Pops concert featuring guest vocalist Amy Hanaiali’i Gilliom. She says it was a pivotal experience — one that contributed to the couple’s decision to take up permanent residence on Maui the following year.

Landrigan joined the Maui Pops Orchestra in 2012, and four years later, became its concertmaster (the first chair violinist and second-most important leader in an orchestra after the conductor). She is also a founding member and concertmaster of the Maui Chamber Orchestra and teaches violin classes through the Maui Youth Philharmonic Orchestra.

In addition to traditional and contemporary Hawaiian songs, there will be a something-for-everyone selection of music, including tunes from The Beach Boys, Paul Simon and “The Sea Hawk” and “Pirates of the Caribbean” soundtracks. And on March 8, vocalist Capathia Jenkins and vocalist and pianist Tony DeSare will join the Maui Pops Orchestra for its Spring Pops concert, which will feature music from the “Great American Songbook.” They will perform classic songs, like “Strike Up the Band,” “I’ll Be Seeing You,” “The Lady is a Tramp,” “Blue Moon,” “A-Tisket, A-Tasket” and “Get Happy.”

No matter the concert, Landrigan says every member of the Maui Pops Orchestra shares a common goal.

“We want to put on a good concert and create a memorable performance for the audience,” she said. “It’s a great thing to be a part of.”

Tickets for the Winter Pops and Spring Pops concerts are on sale now. Both shows begin at 3 p.m. in the Maui Arts & Cultural Center’s Castle Theater. To reserve your seat, visit www.mauiarts.org or call 242-7469. To learn more about the Maui Pops Orchestra, visit www.mauipops.org or call 868-2639.

While we’re just beginning to adjust to the new normal brought forth by the COVID-19 pandemic, it’s important ...