Bovaird expects Chaminade will ‘show up ready to compete’ 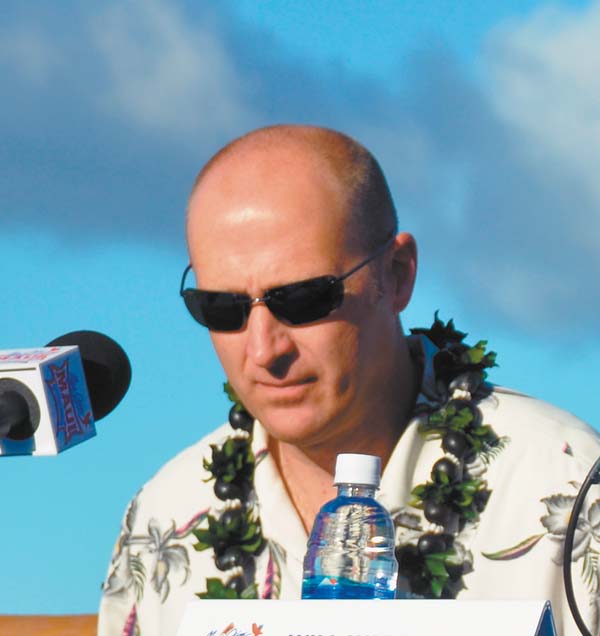 KAANAPALI — No team has more experience in the Maui Jim Maui Invitational than Chaminade.

The Silverswords have seven players who have played on Maui before, which could bode well as they attempt to win a game at the Lahaina Civic Center for the first time in five years.

“The players are the ones playing the game and they are the ones who have to put the ball in the basket,” Chaminade coach Eric Bovaird said Sunday morning during the coaches’ news conference at the Sheraton Maui Resort & Spa. “I would rather have a well-experienced team than a well-experienced coaching staff, I can tell you that. We have just enough of that experience that I think we will be highly competitive in this tournament.

“The people we’ve brought in, our recruits, they have played in some quality competition in the past, so I don’t think that they will show up scared. They’ll show up ready to compete.”

Bovaird is his seventh season guiding the tournament hosts, who are 7-90 all-time in the 34-year-old event.

Chaminade will play today against Notre Dame, No. 13 in The Associated Press rankings. The Silverswords’ last win on Maui came against Texas in 2012.

Michigan coach John Beilein is back after guiding the Wolverines to a third-place finish in 2011, with wins over Memphis and UCLA wrapped around a loss to Duke.

“The idea to be in this environment, for any student-athlete, it’s a huge thing for us,” said Beilein, whose team will face LSU in the final game of the first round. “I sense we have a great deal of appreciation for it. For us to have the level of basketball that we are going to have for three games, it’s just a great indicator of where we are and what we have to work on. Reality hits home a little bit. You’re not home playing a guarantee game — you’re on the road and everybody else is trying to figure out who they are as well.”

Marquette coach Steve Wojciechow­ski is 12-0 on Maui as a player and assistant in four trips with Duke — he was the Maui Invitational MVP in 1997.

“This tournament, I think, is the finest preseason tournament in the United States,” Wojciechowski said. “So as you try to use that nonconference to prepare you for Big East play, which is one of the top conferences in the country, there’s no better place to meet quality opponents that play different styles than here in the Maui Invitational.”

Wojciechowski smiled when asked if he felt any pressure to maintain his unbeaten Maui mark.

“Well, 12-0 comes from riding the coattails of great coaches and great players, so we’re on our own here,” he said.

“I can give our guys some reference points on what I’ve experienced in the past here in terms of travel and what to do when we’re here, getting used to the time change, but at the end of the day when that ball goes up, the basketball court is the basketball court.”

Wichita State — the top-ranked team in the field, at No. 6 — has been to Maui once before, finishing fifth in 2010 under Gregg Marshall.

“The players are different, the staff is pretty much different,” Marshall said. “So I don’t know if that is going to help much at all.”

“We’re pretty deep,” Marshall said. “Hopefully we’re in very good shape — I guess we’ll find out how they are going to handle the back-to-back-to-back with no days in between.”

Mike Brey is back with Notre Dame, which he coached to a runner-up finish in 2008.

“I’m really hoping that our seniors and our upperclassmen who have played together a bunch can help us in an event like this,” Brey said. “Maybe we’re a little more ready early in the season than some teams that are younger than us. Now, we’re still working in some new faces in starting roles and everybody that comes off the bench is new. But when you have a nucleus of three seniors and a junior, some guys that have won together, that can be really helpful.”