Sueing returns to islands as key contributor for Cal 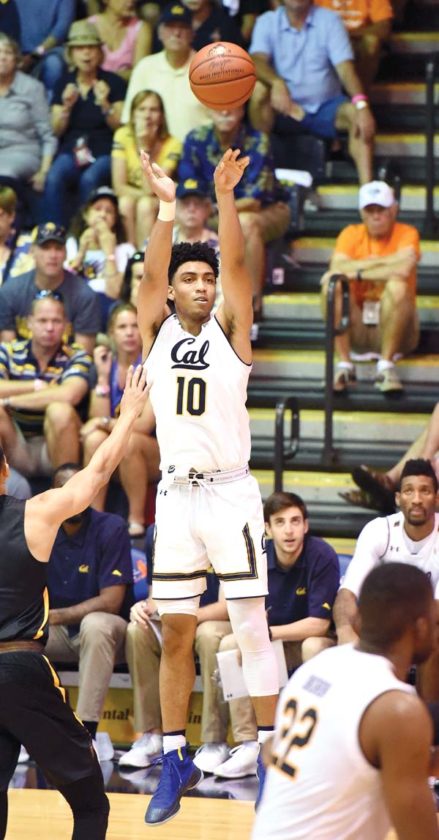 In his first college game at the Lahaina Civic Center, California freshman Justice Sueing Jr. was the kind of player he and his father used to talk about when they watched the Maui Jim Maui Invitational.

“I used to sit on the couch with my pops, and he’d go over how I would want to get on that stage at some point in my career,” Sueing, who was born and raised on Oahu, said Monday after a 92-82 loss to Wichita State, No. 6 in The Associated Press poll, in the quarterfinal round. “Being here with Cal, I think we took a big step in moving forward and showing the world and all the teams what we’re capable of doing.”

Sueing had 20 points and six rebounds against the Shockers, and the 6-foot-7 forward is averaging 13.5 points, second on the team, along with 4.8 rebounds.

“So far, Justice has been a nice surprise,” said Golden Bears coach Wyking Jones. “He plays with a lot of poise and lot of confidence. I could play him at the four, could play at the three. He’s very versatile. … He could post up a little bit, so he’s doing a great job for us.”

Maybe it’s because Sueing knows his dad is watching. Justice Sue­ing Sr. was on the team at the University of Hawaii from 1994 to 1996 — he ranks second in program history in career field-goal percentage — and played professionally in Israel and Luxembourg.

“Pops has always been on me — my hardest critic,” the younger Sueing said. “Always trying to get me better because he knows what I’m capable of. From him playing in college, he just tries to give me all his tips, all his little work ethics, his routines, just to make sure that I can get all the knowledge from him and turn it into my own game. He plays a big part, as well as the rest of my family.”

Sueing spent his freshman year of high school at Westview High in Arizona before transferring to Maryknoll on Oahu. He moved to Mater Dei High School in California for his junior and senior years.

“Maryknoll was all family,” said Sueing, whose father was an assistant for the Spartans. “I loved it over there.”

Earlier this fall, Sueing suffered a stress fracture in his right fibula and was out for six weeks of workouts. The freshman credited the coaching staff and his family for helping him “bounce back real quick.”

“Coach just threw me in there, and from there I’ve just been trying to help the team get wins,” Sueing said.

Stress fractures may become familiar to Sueing in the future; the pre-med major said his college grade-point average is around 4.0 so far.

“I’ve just always been interested in the body,” Sueing said. “If I don’t go that route, there’s a whole bunch of routes in the medical field.”

For now, he’s just getting used to being, as he called himself, “a freshman on the block” with the Bears, who will play Virginia Commonwealth today.

“There’s no excuses coming onto the court, so I had to be ready,” Sueing said. “I know coach had a lot of confidence in me. So going in I just wanted to make sure I came in strong, confident and just ready to play.”

* Colleen Uechi is at cuechi@mauinews.com.