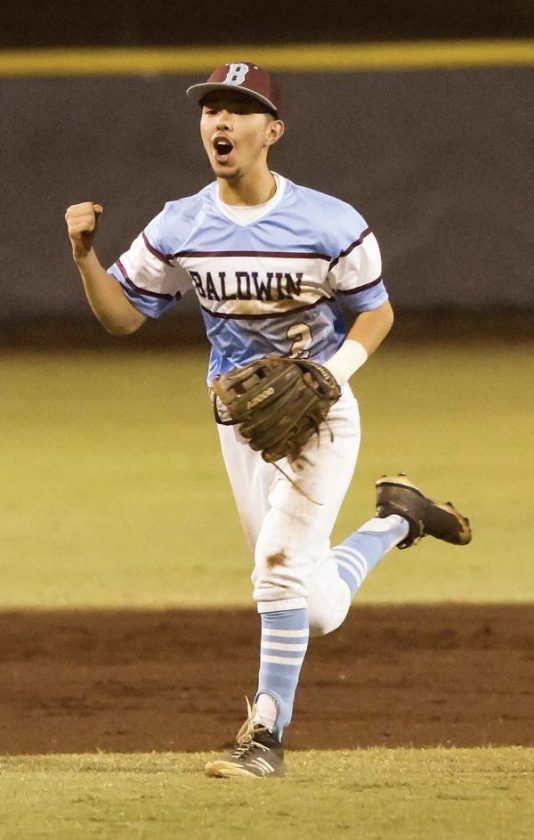 Baldwin High second baseman Adam Yamashita celebrates after turning a nifty defensive play to end the first inning during the Bears’ 2-1, eight-inning loss to Mililani in a state tournament semifinal game Friday at Maehara Stadium. Yamashita, a junior, is among a group of talented underclassmen who will return for the Bears next season. The Maui News / MATTHEW THAYER photos

While their unprecedented run of three straight state titles came to an end at last week’s HHSAA/Wally Yonamine Foundation Division I state tournament, the future looks bright for the Maui Interscholastic League in baseball.

The list has to begin with 10-time defending champion Baldwin High School.

The Bears return a bevy of underclassmen who have patiently waited for their turn to be in the starting lineup. One of the most prominent returnees will be Ben Zeigler-Namoa, who was a member of the starting pitching rotation and usually the designated hitter when not on the mound.

He showed just how valuable and adaptable he can be when thrust into the starting pitching role for Friday night’s semifinal against Mililani. Zeigler-Namoa took the mound after the lineup card had already been handed in with senior Roy Meinen listed as the starting pitcher.

Meinen was unable to go because of stomach discomfort. Zeigler-Namoa did not allow a hit until the fifth inning — he finished five innings with one hit and one run allowed, struck out three and walked one, and took a no-decision in a 2-1, eight-inning loss. 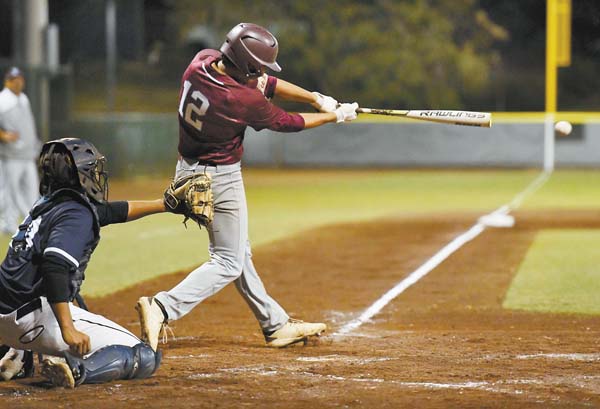 “I didn’t know I was going to pitch until we started warming up and then I got told that I was on the mound,” said Zeigler-Namoa, a sophomore transfer from Lahainaluna. “It just happened. You’ve got to be ready for whatever they throw at you. … I felt great.”

Zeigler-Namoa was 4-0 with a 0.39 earned run average on the mound in MIL play, allowing 14 hits in 23 innings while striking out 20 and walking seven.

The state semifinal loss wrapped up a 7-2 run in championship-round games for the Bears over the last four seasons that included two state titles, in 2016 and 2018.

Zeigler-Namoa was joined in the starting lineup that night by fellow sophomore Danelle Daniels, as well as juniors Reyn Okita, Haku Dudoit and Adam Yamashita. 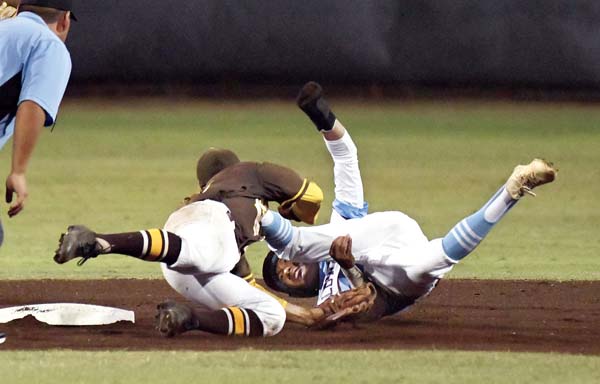 Baldwin’s Haku Dudoit is tagged out by Mililani shortstop Jacob Hirayama while trying to steal second.

Yamashita, the regular second baseman, took a stint on the mound in a 2-2 tie with Hilo in the third-place game that left the Bears at 23-2-1 overall.

“It was cool,” Yamashita said. “I haven’t pitched since last season.”

Yamashita said the heartbreaking loss to Mililani would drive them into offseason workouts.

“It’s going to be a big part of our hunger to be back into the championship game next year,” Yamashita said. “We’ve got to keep pushing, keep working hard throughout the year and just see where it takes us.”

Varner is headed to Pierce Community College in Washington, where last season’s consensus state player of the year and lifetime friend Bubba Hoopii-Tuionetoa is currently a freshman. 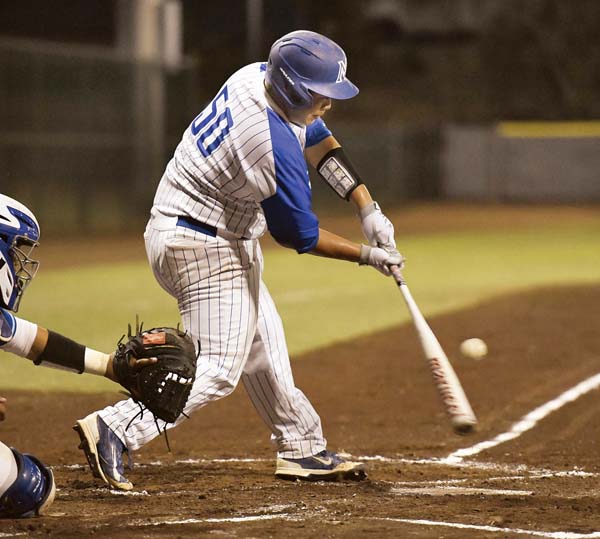 Maui High’s Kamahao Ching hits a single during the Sabers’ loss to Kailua on Wednesday.

“Looking forward to just starting a new chapter in my life and continue with baseball at the next level,” Varner said. “Words can’t even explain how frustrating (the loss to Mililani) was, knowing we had the talent to win it, we just didn’t come through.”

Varner said he will miss all of his fellow seniors. Haole and Kalehuawehe both plan to play in junior college, perhaps together at Pierce or Mission College in California, while Meinen is thinking about Eastern Arizona Community College to continue his career.

“I’m going to miss them a lot because they’re just like real brothers to me,” Varner said. “It’s just time for us to go our different ways and I hope they have the same success I do.”

Haole played shortstop on Saturday for the first time since his junior season. When not taking the ball first in each series on the mound, he played third base as a senior.

“I think they’re going to be really good next year and the following years,” Haole said. “They just have to put in the work, all the sweat, and just do their thing.”

Maui High, the MIL runner-up who won the 2017 state crown, will return a roster that started just two seniors in their extra-inning loss to Kailua in the first round. Freshmen Zach Dando and Kymani Corpuz were impressive all season as starters and junior left-handed pitcher/first baseman Aizeah Lakalaka appears ready to be the Sabers’ ace next year.

“We’ve got a lot to build on for next year and beyond,” Maui High coach Chase Corniel said after Wednesday’s loss.

Baldwin coach Shane Dudoit said his team has some returnees to work with, but the rest of the state will not rest.

“We do, as do everyone else in the state,” Dudoit said. “I like our chances as always, but we’ve got a lot of work to do and a lot of things to work on. … They buy into the philosophy, they’re great kids. They accept coaching, they aceept instruction, they listen, and as I said, they’re great people first.”