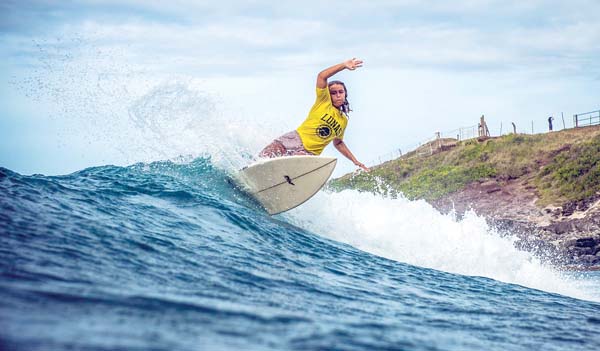 Two Lahaina surfers, Madison Runyon and Tony Nunez, have been selected by the Maui Interscholastic League coaches as the MIL Surfers of the Year.

Lahainaluna High School’s Runyon left no doubt who would be the MIL girls surfer of the year as she swept the shortboard and bodyboard season titles.

Nunez, of Maui Prep, won the boys shortboard championship and edged out bodyboard champion Alex Fahland of King Kekaulike in the voting by the MIL surf coaches.

Runyon won three of the four MIL shortboard events to easily defeat Ellie Brown of King Kekaulike, and she won a bodyboard contest to get past Na Alii’s Kayalani Mullen and Kamehameha Maui’s Labryana Hookano. Mullen won two bodyboard events while Hookano took the other.

“I’m really happy,” Runyon said. “I put a lot of effort into my practices. I just went out there and had fun.” 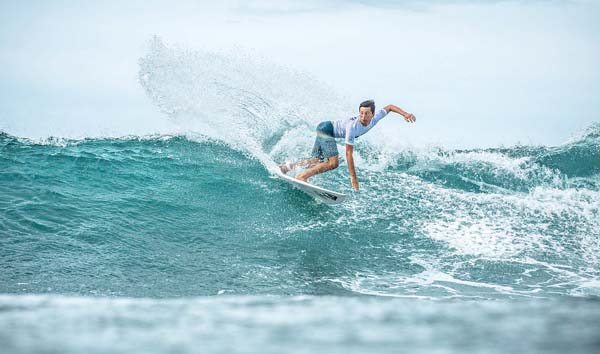 The senior-to-be used surfing as a motivation to bring up her grades during her freshman year.

“Surfing pushes me to try a lot harder in school because before I wasn’t really doing a lot in school,” Runyon said. “When surf season came around, I was like, what am I doing? I’ve got to stop playing around and get stuff done. From there on out, my grades have been pretty good.”

Nunez eeked past his teammate, Ty Kirby, to win the shortboard title. Kirby was leading the season’s standings going into the fourth and final meet at Hookipa Beach Park.

“That was the only meet that was a little stressful,” Nunez said. “I had to perform at that one because the points really mattered. I was sitting in second coming into that meet, TyTy was in first. To win the MIL title I would have to beat TyTy.”

Nunez, a junior-to-be, left little doubt in the overhead surf that day as he won at Hookipa while Kirby placed fourth. 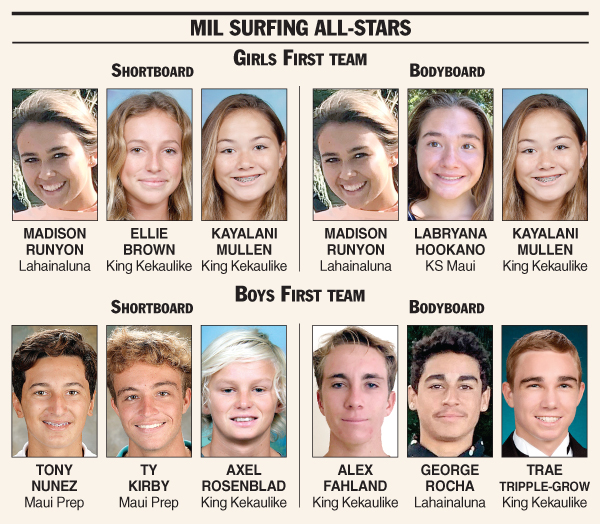 When Nunez isn’t surfing in his free time, he can be found working on a charter fishing boat or at a Civil Air Patrol meeting, learning how to fly airplanes.

He has been doing both about three years.

“My friend has a little skiff, started fishing on there,” Nunez said. “A few captains in the harbor saw me and invited me to fish with them, it’s been a part-time job ever since.”

His interest in aviation was sparked by a relative.

“My uncle flys for Air France, that’s what got me interested,” he said. “I flew in the cockpit with him for 10 hours, Paris to Vancouver. That’s when I found out that’s what I really want to do.”

Nunez has two more years to fly high in MIL surfing while Runyon readies for her final year. Both West Maui students should be in the thick of the individual title hunts again next year.