VIDEO and STORY: Hawaii’s McDonald works out with Lunas 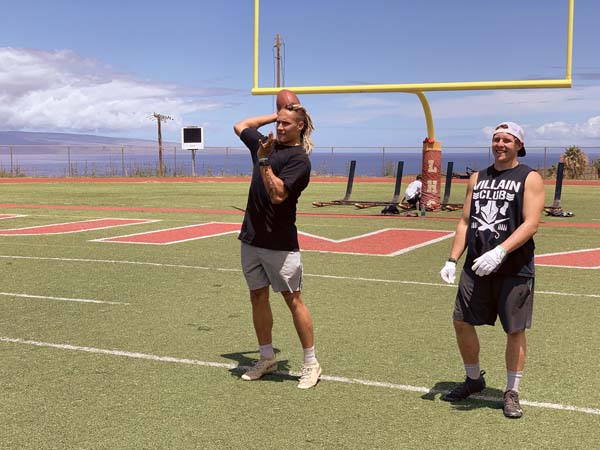 Surrounded by several Lunas and his brother Troy under a blazing West Maui sun, there is no place the University of Hawaii starting quarterback would have rather been on Thursday.

“Just family, took a trip out here and had a little staycation from Oahu, so just out here just relaxing, trying to get some work on downtime,” McDonald said. “Trying to keep the game on point.”

McDonald knows that the UH starting quarterback is the state’s quarterback. 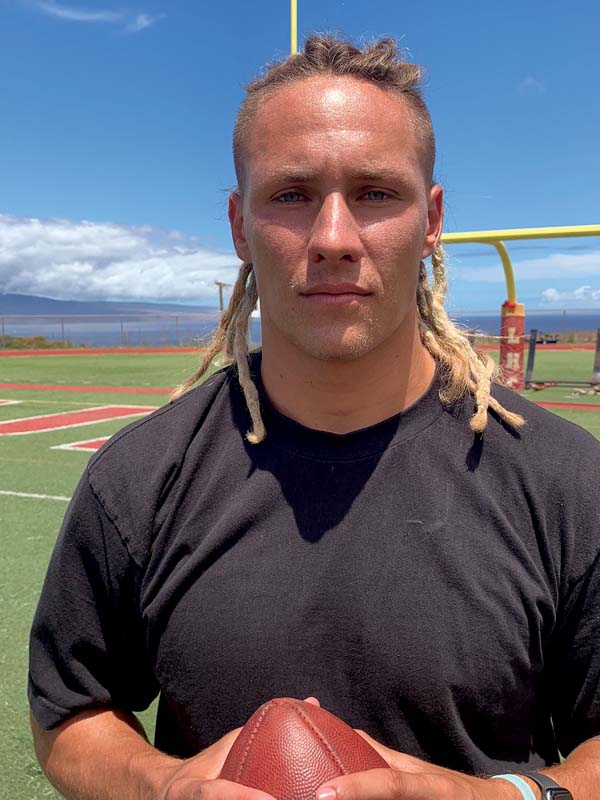 “It’s a blessing, everyone’s eyes are on you, so you’ve always got to be on your game,” said McDonald, who went to Sonora High School in La Mirada, Calif. “Whether you’re out in town or just on the field and then there’s also expectations. People out here, they expect you to win and that’s just how it is and that’s how it should be.”

He feels right at home in the 50th State.

“The warm embrace of everyone on island. I’m on Oahu, but now I’m out here on Maui, and everybody’s still showing love, so it’s awesome just to have that kind of fan-base and good people around you to support you and help you,” he said.

In the past two seasons, McDonald has watched Mauians Keelan Ewaliko and Teva Eldridge graduate from the UH program.

“I’m not sure what you guys put in the water, but those guys are just guys who are just strong, solid dudes,” McDonald said. “Those two guys were just always ready to help the team, and I just feel like that’s how all the local boys are — ready to help the team any way they can. Great people to be around and great teammates to have.” 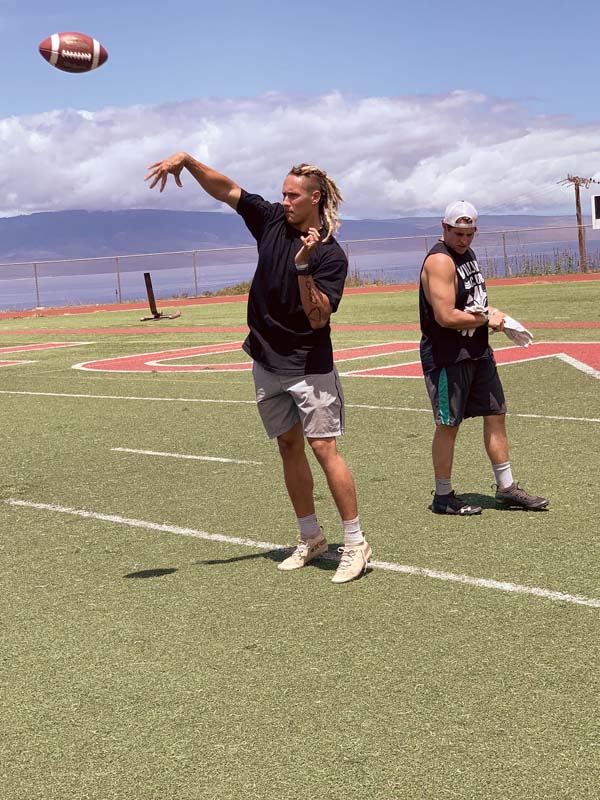 Cole McDonald warms up prior to working out Thursday at Lahainaluna

He looked around the $9.2 million surroundings of Sue Cooley Stadium with the Auau Channel and Lanai on the horizon and marveled. Knowing he was spending time on Maui, he texted UH head coach Nick Rolovich wondering where to work out and the answer came back quickly.

“It’s probably one of the coolest places I’ve been,” McDonald said. “This school’s pretty special, overlooking everything. It puts a lot of pride in you, just saying, ‘This is home.’ … I texted Rolo where should I work out and it was Lahainaluna, boom.”

McDonald will be a redshirt junior for the Rainbow Warriors this fall, and he knows just how daunting the season could be with the schedule that awaits. UH opens with three straight games against Pac-12 opponents, starting with home dates against Arizona and Oregon State and then a game in Seattle against Washington on Sept. 14.

Among the Lahainaluna receivers running routes for McDonald on Thursday were Devon Sa-Chisolm and Kai Bookland.

“It’s fun man, they’re the powerhouse over here, so it’s fun to just get to work with these young cats,” McDonald said. “Get after it, shed a little light on them, help them out in their game. Just help each other get better in the end, that’s what we’re here for, so I’m thankful for them to take a little time out of their day to come out here and work with us.”

Bookland, a rising senior for the three-time defending Division II state champions, was more than grateful for the opportunity to get in some extra work with McDonald, who passed for 3,875 yards and 36 touchdowns with just 10 interceptions last season when he was named all-Mountain West Conference honorable mention.

“It’s awesome, he’s such a smooth thrower, the ball comes out really clean, it’s a nice spiral that’s easy to catch,” Bookland said. “He has a lot velocity on the ball, so it’s nice and easy to snag. It’s a great opportunity for us to get better and learn from one of the best quarterbacks in the nation.”

Bookland said he is looking at several Division III schools to continue his career in college, but he was part of a lesson taught by McDonald on Thursday. It was the third workout McDonald has had at Lahainaluna this week.

Sa-Chisolm was anticipating his first workout with McDonald on Thursday.

“Just the experience of working with such a great quarterback, it will be a great opportunity to get better and keep working harder,” Sa-Chisolm said. “It’s amazing, just having the opportunity for him to come and spend his time with us.”

It’s quite clear that McDonald is the starter for UH, even after an injury-plagued campaign last season when backup Chevan Cordeiro, a freshman from Saint Louis School, replaced him with enough success to fuel quarterback controversy talk.

“First game I strained my MCL, played through that,” McDonald said. “First quarter against San Jose State I took a shot to the side. The guy that hit me actually knocked himself out.”

With lingering pain from the SJSU game, he later went to the hospital for extra tests “and I had some internal bleeding in my side that didn’t drain out properly. It was all in my scrotum. … I couldn’t walk for about a week. … I played hurt most of the season. It was pretty brutal.”

He said, “I feel great” now, and he is “just mentally prepared and ready to go.”

Even with some fans calling for the local backup at times last season, McDonald did not blink.

“I try to big brother him and take him through the ropes because he’s a little wide-eyed young cat coming in right out of high school, so it’s a little different,” McDonald said. “He had some great games and helped us out.

“We’re not, like, best friends, but I definitely try to help him as much as I can. I was once in his shoes, and he’s going to take over once I’m gone. I’m excited for him and just what the future holds for him.”

The offense said goodbye to prolific wide receiver John Ursua, but McDonald is not worried about how good this team can be in Rolovich’s run and shoot offense.

“We lost John, but, you know, we’ve got some insanely good athletes to replace him,” McDonald said. “We’ve got the whole offense returning, basically. … run and shoot, just load the gun, let it shoot. It’s a blast. The dudes around me just make it so much easier.”