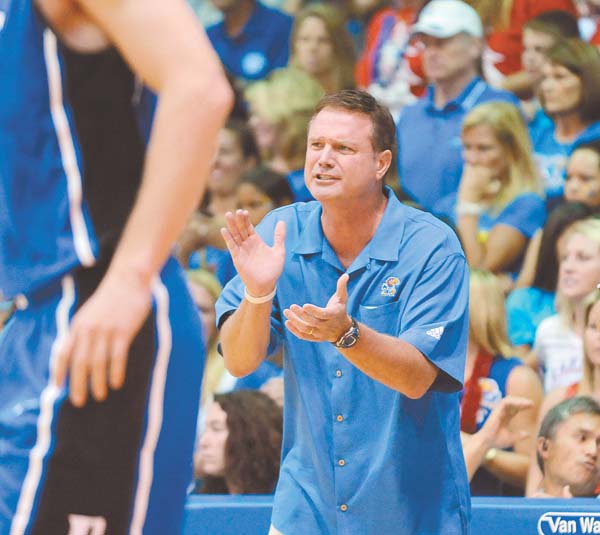 Coach Bill Self, shown during the 2011 Maui Invitational, brings his Kansas Jayhawks back to Lahaina Civic Center for this year’s tournament, set for Nov. 25-27. The Jayhawks will be making their seventh Maui appearance and has two titles to their credit (1996, 2015). The Maui News / MATTHEW THAYER photo

In its first game back in the Maui Jim Maui Invitational, host Chaminade University has a tough challenge.

The Silverswords will face men’s college basketball powerhouse Kansas in the first round of this year’s tournament, the bracket for which was revealed early Thursday morning.

After missing last year’s tournament — the first year of an agreement to participate in the event’s championship round every other year instead of annually — Division II Chaminade will take on the mighty Jayhawks in the third of four games on Nov. 25 at Lahaina Civic Center, at 4 p.m.

The Silverswords, who often draw the perceived No. 1 seed in the first round, are 8-92 overall in the tournament, celebrating its 36th year.

The Jayhawks have won two Maui titles, including in their most recent appearance in 2015 — they also won in 1996. This will be the school’s seventh Maui appearance, tying Arizona and North Carolina for most among non-host programs.

On the same side of the bracket, BYU takes on UCLA in the first day’s nightcap at 6:30 p.m. The Bruins won the Maui title in 2006.

The other side of the bracket features two former Maui champs in Michigan State and Dayton.

Dayton faces Georgia in the tournament’s first game at 9:30 a.m. on Nov. 25. The Flyers won the tournament in 2003 — defeating Hawaii 82-72 — while the Bulldogs are making their first appearance in the event.

Perennial power Michigan State will be playing on Maui for the fifth time, having compiled an 8-4 record with a title in 1991. The Spartans play Virginia Tech, which finished third in its only Maui appearance in 1985, at noon in the first round.

For the second straight year, the championship game will be played before some consolation games. The final will be at noon on Nov. 27, after the fifth-place game but before the seventh- and third-place games.

Ticket information is available at mauiinvitational.com. On-island and individual ticket sale dates have yet to be announced.