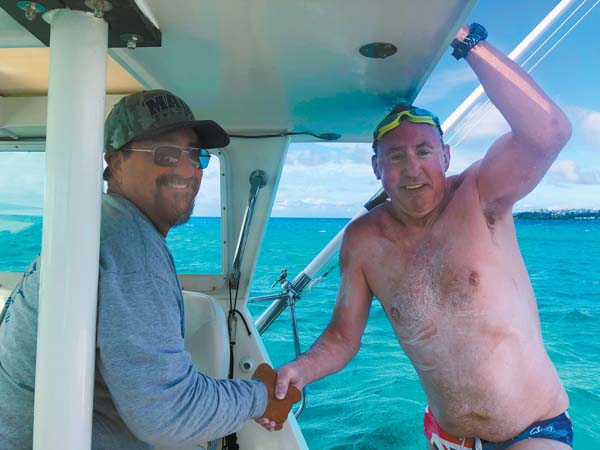 Dr. Andrew Davis, a 60-year-old medical practitioner from Sydney, Australia, became what is believed to be the first solo swimmer to complete the ‘Au’au Channel crossing employing exclusively the breaststroke on Monday.

It took Davis 9 hours, 26 minutes to complete the historic swim, which covered nearly 15 miles (24 kilometers) as recorded by the escort boat’s GPS, from Club Lanai to Napili Bay.

Why would he take on such a challenge?

“One is because it’s never been done,” Davis said. “And secondly, I have been doing a lot of training for the Australian Masters Games, which are held in Adelaide, Southern Australia, next month. I thought because I’ve done such a lot of training I thought I could put it to good use and do a preliminary swim across the (‘Au’au) Channel before I went in the competition.

“I’ve done many training sessions, particularly on the weekend, where I’d swim for 10 hours, 25 kilometers breaststroke.”

Davis said the crossing was particularly challenging because there was a strong cross current running towards Kapalua for almost the entire swim.

“The current was so strong yesterday, doing the breaststroke, that blew me way past Black Rock –that’s why I finished at Napili Bay,” Davis said via phone on Tuesday.

This also was a charity swim that raised over $10,000 in Australian currency (about $6,850 U.S.) for The Sydney Retreat, a private, not-for-profit residential alcohol and drug recovery program in Sydney.

“I thought it would be selfish if I was just to do the swim for me,” Davis said. “There had to be something more to it and a colleague of mine, a medical colleague of mine, is setting up this rehab facility. He sent an email to me asking if I would be interested in donating to the organization. I said, ‘Sure.’ “

Davis just celebrated his 60th birthday last month, moving him into the “senior” category in his homeland.

“I thought it’d be pretty cool to be a senior and also then to be the first person to cross the (‘Au’au) Channel solo breaststroke,” Davis said.

Davis said he could not have completed the crossing without the help of Lahaina boat captain Randy Kinores of the Kamalani, paddler Dennis Blevins and his support crew of fellow Cronulla, Sydney Surf Lifesaving Club member Lorissa Smith and Simon Watkins, a Bondi Surf Life Saving Club member from Sydney.

Davis said he loves Maui and is no stranger to the channel, having competed in the annual Maui Channel Swim five times from 2005 to 2017 as a relay member for the Tattersalls Club B team. The Tattersalls elite team won the last of its 13 straight Maui Channel relay titles earlier this month.

He also swam the channel solo freestyle in 2006, finishing in 6 hours, 47 minutes.