San Agustin, Kiffmann to represent US in international taekwondo competitions starting next week 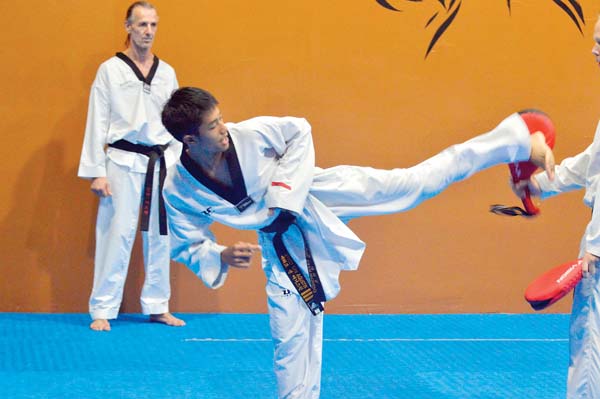 KAHULUI — Taekwondo has become a lifestyle for Kiffmann’s Maui Elite Taekwondo’s Miles Kiffmann and Jerico San Agustin, who have been following in their parents’ footsteps since they were old enough to enter the dojang.

And the years of practice and mentorship have certainly been paying off.

Kiffmann and San Agustin now have the opportunity to represent their families, Maui and the U.S. at several international competitions, starting with the Canada Open Championships from Oct. 4-6 in Montreal, followed by the Las Vegas Open International Taekwondo Championships in November.

“I feel very proud, I’m thankful for all the support I have and I’m really excited to represent the U.S. because I’ve never done it before,” the soon-to-be 16-year-old San Agustin said Thursday night at the Kiffmann’s dojang in Kahului. “Being someone who gets to represent Maui is also what I’m really proud of.”

The Canada Open provides the opportunity for athletes to collect points towards qualifying for the Olympic Games. 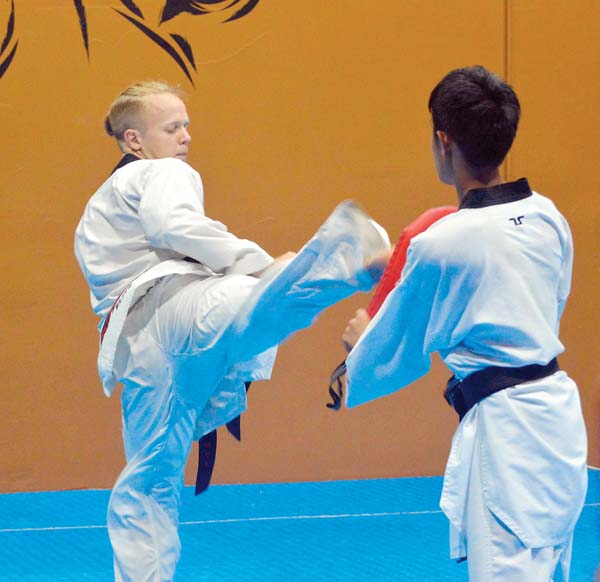 Miles Kiffmann back-kicks into a taekwondo paddle during a drill session.

San Agustin, who is a junior at Maui High School, will be competing in the junior 15-17 black belt Olympic sparring 48-kilogram division as an AAU flyweight A-team member.

“I’m determined,” he said of the Canada Open. “I’ve been training, I just want to just keep stepping up and going up. … And it’s nice that I won’t be traveling and waiting alone.”

The 26-year-old Kiffmann will be by San Agustin’s side every step of the way, as a teammate and coach.

“It’s very cool, this is the first time I’ve made some kind of team for the U.S.,” said Kiffmann, who will be in the senior 18-32 black belt Olympic sparring 68kg division. “If you want to make it to the Olympics eventually, you have to compete in all these tournaments internationally, and based on how you do, like if you win, you get more breaking points.

“I’m just going to do my thing and see what happens.”

While he qualified for Canada as an alternate, or lightweight B-team member, after finishing second at the AAU Taekwondo National team trials in August, Kiffmann said he plans to fight in his usual featherweight class (63-68kg).

Kiffmann’s parents, Master Gunter Kiffmann and wife Kathryn Kiffmann, have taught taekwondo on Maui for 25 years, including hosting the annual Maui Open Taekwondo Championship that welcomes competitors from all over the world.

Miles Kiffmann joined them in 2008 to help train and mentor other athletes, like San Agustin, at the taekwondo center, which he described as “great and fun,” besides the occasional injuries.

“I’ve been doing this pretty much my whole life, born into it,” said Kiffmann, who is a Baldwin graduate. “As I’m getting older, I just like the workout and to stay healthy and fit, and I also teach all the time. Me and my dad coach (San Agustin) sometimes.”

San Agustin joined Kiffmann’s Maui Elite Taekwondo when he was 7 years old as a yellow belt, following the path of his father, who is a black belt, and his mother. San Agustin’s 13-year-old sister also practices taekwondo and gymnastics.

“It’s been very thrilling, there’s been a lot of ups and downs, a lot of achievements, which is what I like,” San Agustin said. “The training can be very intense.”

Taekwondo is also an important part of the family for the valuable lessons it brings, he added.

“I think it helps improve people, obviously physically, but also mentally. Makes them more confident, brave,” San Agustin said. “The ultimate goal is to make it to the Olympics and win, but also to have it as a lifestyle, that’s what I like about taekwondo.

“It gave me something interesting about me and it’s what I grew up with and I also want to encourage the other kids to continue doing it because I think it has a lot of good benefits.”