Suzuki expected to start after missing games with hip injury 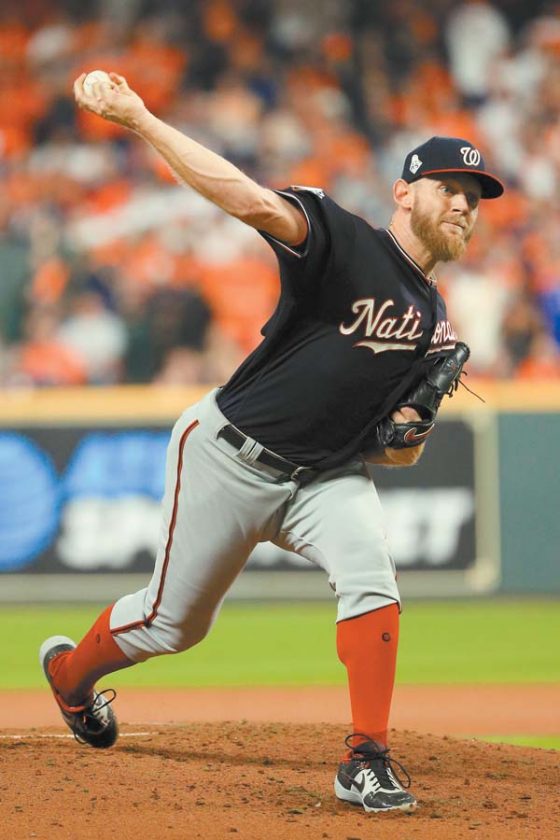 Nationals starting pitcher Stephen Strasburg throws during the first inning of Washington’s 7-2 win over the Houston Astros in Game 6 of the World Series on Tuesday. AP photo

HOUSTON — It’s been an unconventional road to Game 7 of the World Series for Stephen Strasburg and the Washington Nationals.

Seizing the October spotlight he missed out on as a youngster, Strasburg pitched a gem into the ninth inning Tuesday as the Nationals beat the Houston Astros 7-2 to tie this Fall Classic at 3-3.

Juan Soto ran all the way to first base with his bat following a go-ahead homer, the same way Houston slugger Alex Bregman did earlier.

Now, it’s onto a winner-take-all Game 7 tonight to decide the only Series in which the visiting team won the first six.

Adam Eaton and Soto hit solo homers off Justin Verlander in the fifth to help the Nationals overcome a 2-1 deficit. Anthony Rendon also went deep and drove in five runs.

“Maybe they enjoy our park and maybe we enjoy their park,” said Rendon, who attended high school 4 1/2 miles from Minute Maid Park. “We’re not going to ask questions.”

Max Scherzer, revitalized by an injection of painkiller, is primed to return from an irritated nerve in his neck to start Game 7 for Washington in a Series that’s been all road, sweet, road.

Scratched from his scheduled Game 5 start only hours before the first pitch, Scherzer was warming up in the seventh inning Tuesday before Rendon’s homer, then sat down as Martinez became the first manager tossed from a Series game since Atlanta’s Bobby Cox in 1996.

“The cortisone shot worked. That relieved the pressure on the nerve, and then keep applying heat,” Scherzer said. “Our chiropractor, he does amazing work. He was able to go in there and make adjustments. We did two treatments of it and really freed up the neck.”

His batterymate is also expected back. USA Today’s Bob Nightengale reported on his Twitter account that Washington catcher Kurt Suzuki said after Tuesday’s game that he will start today — the Baldwin High School graduate hasn’t played since suffering a hip flexor strain in Game 3.

“This is what you play for,” Suzuki said.

Zack Greinke will start on the mound for the Astros, who led the majors with 107 wins and are seeking their second title in three seasons.

“I wish it was in a National League park,” Greinke joked, cracking a smile about his affinity for hitting.

Fired up after a disputed call at first base went against them in the seventh, the Nationals padded their lead moments later when Rendon hit a two-run homer off Will Harris. Martinez, still enraged at umpires, was ejected during the seventh-inning stretch, screaming as a pair of his coaches held him back while the crowd sang along to “Deep in the Heart of Texas.”

Rendon added a two-run double off Chris Devenski in the ninth to just about seal it after Strasburg gutted through without his best fastball to throw five-hit ball for 8 1/3 innings. Washington pitching coach Paul Menhart told Strasburg after the first inning that he was tipping pitches. Strasburg allowed only three more hits.

“Started shaking my glove, so they didn’t know what I was throwing,” Strasburg said. “It’s something that has burned me in the past, and it burned me there in the first.”

Verlander dropped to 0-6 with a 5.68 ERA in seven Series starts, a blemish on his otherwise sterling career.

“I didn’t really have great feel for the off-speed stuff,” he said.

Martinez’s ejection came after Trea Turner was called out for interference when he ran on the fair side of the foul line and knocked the mitt off first baseman Yuli Gurriel in the seventh following his slow roller. Washington was leading 3-2 at the time and would have had runners on second and third with no outs.

Martinez tried to protest the game. Joe Torre, MLB’s chief baseball officer, said the long delay that followed — just over 10 minutes — was caused by umpires at Minute Maid Park consulting with the replay room in New York to confirm the decision on the field was not subject to a protest.

Rendon’s RBI single through a shifted infield put the Nationals ahead in the first, but Houston needed just four pitches to tie the score. Springer lined a double off the left-field scoreboard, at 112 mph off the bat the hardest-hit ball of the Series, and advanced on a wild pitch before scoring on Altuve’s sacrifice fly.

Bregman’s third homer of the Series put the Astros ahead on Strasburg’s 12th pitch. He carried his bat out of the batter’s box and tried to hand it to first base coach Don Kelly, only for the bat to fall as Kelly stuck out his hand for a shake.

“I just let my emotions get the best of me and it’s not how I was raised to play the game,” Bregman said. “I’m sorry for doing that.”

Eaton tied the score in the fifth when Verlander hung a slider. Soto, who turned 21 on Friday, followed with his third home run of the Series.

Soto, too, flipped the bat at his first base coach, Tim Bogar.

“I just thought it was pretty cool,” Soto said when asked if he was mimicking Bregman. “I wanted to do it.”

Nationals starting pitcher Stephen Strasburg throws during the first inning of Washington’s 7-2 win over the Houston Astros in Game 6 of the World Series on Tuesday. AP photo

Why are sports permits for parks taking so long?