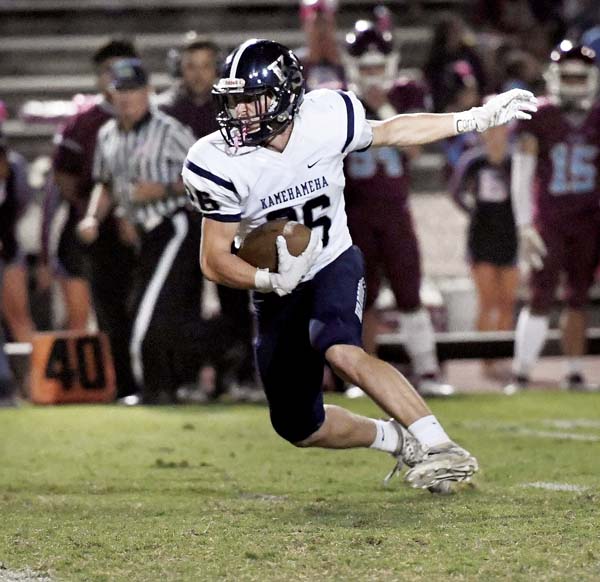 Kamehameha Schools Maui’s Makani Smith-Kemfort makes a move after catching a pass in the second quarter of the Warriors’ 17-14 victory over Baldwin on Friday night at War Memorial Stadium. -- The Maui News / MATTHEW THAYER photo

WAILUKU — For two seasons in a row, the Kamehameha Schools Maui football team has matched a school-best record and come up short, most likely, of the state tournament.

The Warriors fought past Baldwin 17-14 on Friday night at War Memorial Stadium on the Bears’ senior night in front of about 3,000 fans.

“Nothing’s easy around here,” Kamehameha Maui coach Ulima Afoa said. “That’s why you keep playing for 48 minutes or how ever long.”

The result left Kamehameha Maui barely alive in the postseason scheme of things, but needing major help down the stretch. The Warriors finished their regular season 5-3 in the MIL, 6-3 overall and 3-1 in the MIL second round. Kamehameha Maui said goodbye to a senior class of 19 players in the game.

“This is a good senior class, we just have to back them up,” Afoa said. “We just have to continue to build our program and continue to stay on the target as far as what we’re trying to accomplish at Kamehameha, and that is to be a perennial contender every year.” 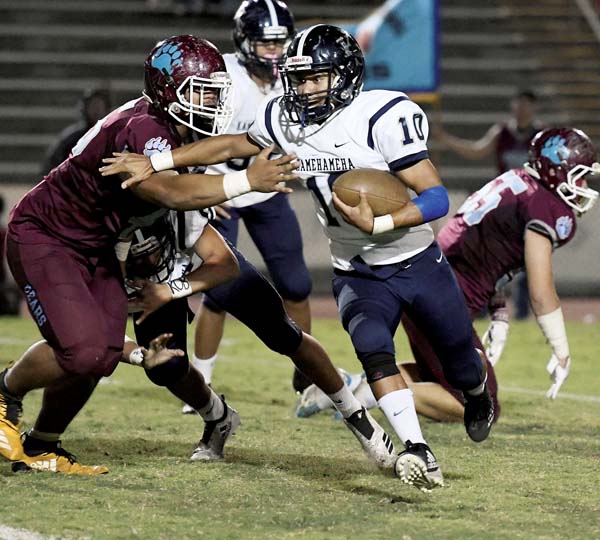 The Warriors need Lahainaluna to lose its last two games, starting tonight against King Kekaulike, to force a playoff for the MIL Division II state berth. The Lunas are the three-time defending state D-II champions and 13-time MIL D-II champs who have won 23 straight MIL games.

“We have a large blockade in the way in Lahainaluna, but, hey, we will just keep working until we do,” Afoa said.

The Warriors took a 17-14 lead on a 3-yard pass from Tiliti Adams to Makani Smith-Kemfort with 5 minutes, 4 seconds left in the game.

That was the second lead change in the fourth quarter and capped a 10-play, 92-yard drive that included a 29-yard Adams pass to Smith-Kemfort that moved the ball to the Baldwin 39-yard line. Three plays later, Teancum Aiwohi had a 21-yard run to the 8.

The Warriors took over moments later after stopping Baldwin on downs at the Baldwin 37-yard line with 2:58 to play. 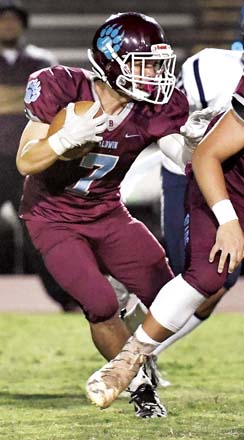 Kamehameha Maui pushed their lead to 10-0 on the first possession of the third quarter when Karsyn Pupunu broke free on the left side and hauled in a 31-yard touchdown pass from Adams, who finished with 17 touchdown passes this season. That capped a four-play, 48-yard drive that started with a 17-yard Adams pass to Smith-Kemfort, who finished with six catches for 74 yards.

The Bears climbed within 10-7 after a big break when they kept possession deep in Kamehameha territory after a blocked field goal. The ball went forward after Isaiah Souza’s 39-yard try was blocked, it was touched by a Kamehameha defender and Baldwin recovered at the Kamehameha 17-yard line.

Two plays later, Laakea Asuega-Stark broke free for a 22-yard scamper into the end zone with 3:50 to go in the third quarter.

Baldwin took a 14-10 lead on their next possession on a 18-yard strike from Asuega-Stark to Danelle Daniels with 10:03 to play. That capped an eight-play, 58-yard drive that included a 24-yard Asuega-Stark pass to Daniels on third-and-14.

The Warriors took a 3-0 lead into halftime on the strength of a 28-yard field goal by Hao Awai with 6:18 left in the second quarter.

The Warriors had plenty of chances to put more points on the scoreboard, but the Bears defense thwarted them. They reached the Baldwin 33-yard line on their first possession, but things ended there with a 5-yard punt.

Kamehameha Maui reached the Bears’ 45 on their next drive before punting, and then midfield on their third possession.

The field goal was set up by an interception and 18-yard return by Kapena Gushiken that pushed the ball to the 12-yard line.

Adams was 8-for-14 passing in the first half for 90 yards to five different receivers. He threw an interception to Baldwin’s Tommy Collier in the end zone with 6 seconds left in the half.

The Bears fell to 4-3, 1-2 in the MIL, but they have clinched a Division I state berth. They beat Kamehameha Maui 27-23 on the opening weekend of MIL play in August.

“We started off slow again, it wasn’t as bad, but 3-0, you know, one play away,” Baldwin coach Pohai Lee said. “But again, that’s what halftime is for, make the adjustments and try to get going. We wanted to get the ball out a little quicker, that was the plan with their rush, but (Asuega-Stark) hung in there.

“Like I said, we still have a ways to go yet, but we’re on the right path.”