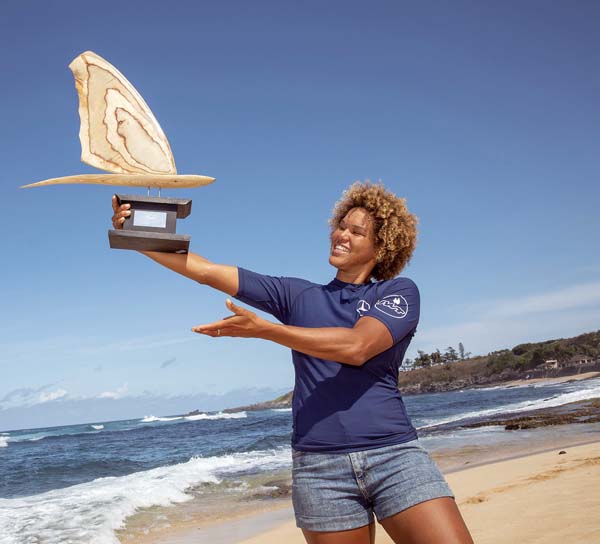 HOOKIPA — Low winds and heavy swells made for an interesting Mercedes-Benz Aloha Classic, but the competitors made every opportunity count.

France’s Antoine Martin won the pro men’s single-elimination event Monday, and that was enough to take the Aloha Classic title and led him to being crowned the International Windsurfing Tour men’s wave champion.

“It feels great I would say, it’s been a very longtime dream,” Martin said after accepting his award Thursday at Hookipa Beach Park. “I remember watching the Aloha Classic at 12 years old and it was super exciting to see all the pros and the legends of windsurfing, so it was one of my dreams then.”

After the competition got started Sunday and Monday with the pro men’s and women’s single-elimination events, the double elimination rounds on Tuesday were cut short due to low trades and dangerous ocean conditions. Many sailors went home with broken gear as a result, and Maui competitor Zane Schweitzer suffered a dislocated knee.

On Wednesday, only the youth division was contested before winds dissipated and the contest was again put on hold. Thursday was the final day of the contest — due to county restrictions, the Aloha Classic could only be contested on five consecutive days — and conditions had not improved enough to conduct any more heats. 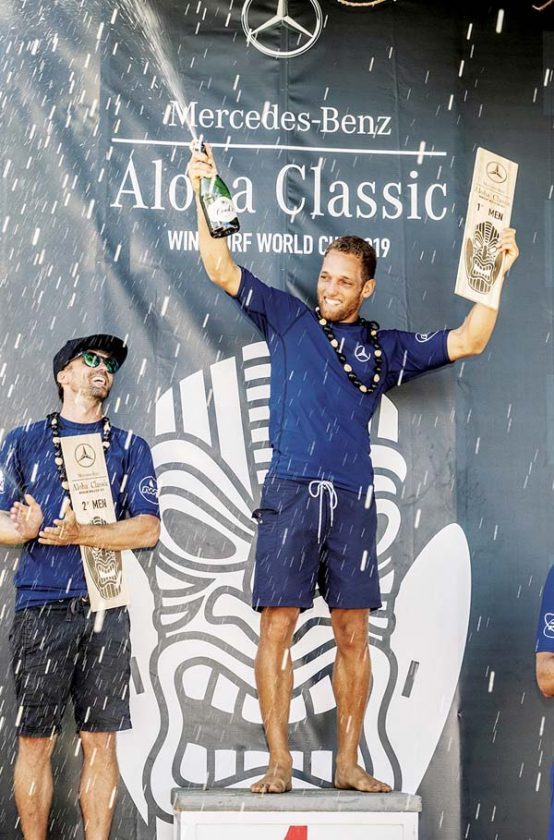 Antoine Martin of France celebrates his Aloha Classic win atop the podium as runner-up Camille Juban of Guadeloupe looks on.

Martin performed rail-to-rail turns and a variety of aerials on Monday for perfect 10s. In his final heat, Martin damaged his rig in an attempt at a double mast in the rolling waves, but his early performance was good enough to win his first single-elimination and lead for the remainder of the competition.

“We had big waves, you know just enough wind, but very big waves, so it made it difficult, but I guess that gives a little more credit to my attempts,” Martin said. “Yesterday, the tradewinds stopped blowing. … It’s true that, if you’re on top, you want to stay there.”

Maui’s Hall of Fame waterman Kai Lenny was fourth. While he was not particularly pleased with his place, Lenny was proud to represent the island on home turf.

“I’m just so stoked that we had the event back here on Maui, considering that Maui is such an iconic place for windsurfing, it felt right,” he said. “My goal was to win, absolutely, so I’m pretty devastated I got fourth place, but at the same time, so stoked the event went on and to have made the final, and hopefully it’s just motivation for the event to happen again next year and keep it here.” 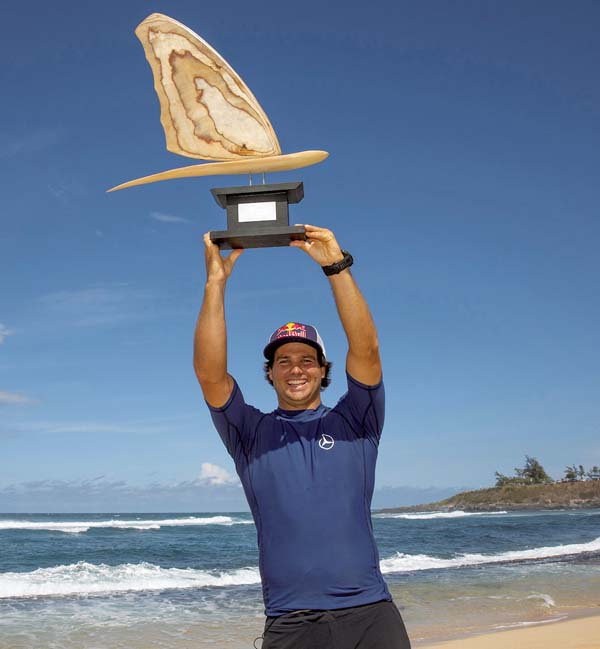 Philip Koster of Germany secured his fifth PWA Wave World title with his equal-ninth finish in the Aloha Classic.

“I’m super happy,” Offringa said. “It’s been a long year in general, but it’s always a pleasure to finish up here on Maui because it’s a special atmosphere all the time, like my favorite thing is when we do the opening ceremony when they have the Hawaiian blessing, it was really special.”

Sunday’s single-elimination round started with 8-to-12-foot waves but solid wind speeds as Offringa climbed the leaderboard in front of Spain’s Iballa Moreno, who finished second, and Motoko Sato of Japan.

“The women only competed one day and afterwards we didn’t get the conditions, which was great for me because I won the first round, but then it was really nerve-wracking to see if we would have to do the second round,” Offringa said. “Until about one o’clock today I wasn’t sure if they would continue, so yeah, I’m just very happy about everything.”

Offringa opened up the competition with three powerful turns and a frontside aerial, moving her to first place. Through dropping winds, she found another wave just in time to secure the win, and Moreno and Sato just missed out.

Spain’s Maria Andres finished equal-ninth in the Aloha Classic, but that was enough for her to capture her first IWT women’s wave title.

Germany’s Philip Koster, who also finished equal-ninth in the pro men’s division of the Aloha Classic, was crowned the 2019 PWA world champion for the fifth time.

“It feels very good, this whole year actually has been very hard,” said 25-year-old Koster after stepping off the podium. “The competition was very tough and it felt good to get the title here in Maui.

“This year we had really, really light winds, so it was more about wave riding, and the other contests are more about jumping — high jumps and tricks in the air — and here it’s about being selective and smart and taking the best waves.”

Among the top local performers in the competition was Jake Schettewi, who placed second behind Takuma Sugi of Japan in the youth division Wednesday. Younger brother Zachary “Z” Schettewi was fourth.

“It felt good especially because I flew here just a few days before the event, so to get on the podium was nice,” said Jake Schettewi, who’s attending Washington University in St. Louis and had only a few days to practice. “It was probably one of the lighter Aloha Classics especially how it was structured with the five consecutive days, so especially yesterday it was really light in the final, I think everyone was on their bigger gear, bigger boards, bigger sails.”

While conditions didn’t reflect “normal Hookipa,” Schettewi said he came out strong in his heat Wednesday, opening up with a roundhouse wrap and then added four combinations of turns later in the tournament.

Schettewi also secured himself 13th place among the pros.