Baldwin unable to keep up with Leilehua, falls 34-7 in state tournament first round 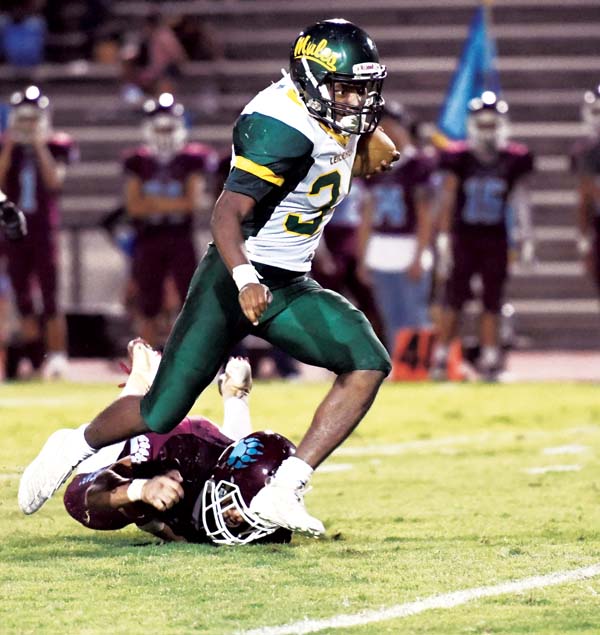 WAILUKU — The Baldwin High School football team played the collective game of its life, at least for one half, before an avalanche fell on the Bears in the second half of a 34-7 loss to Leilehua on Friday night at War Memorial Stadium.

The loss in the first round of the First Hawaiian Bank/HHSAA Division I state tournament ended the Bears’ season at 5-5 overall. Leilehua (10-2), the Oahu Interscholastic Association runner-up, moves on to face No. 1-seeded and defending champion Hilo next Saturday at Wong Stadium.

Baldwin’s defense stopped Leilehua five times without points in the first half when the Mules ventured into Bears territory, three of those ending in the red zone.

“That’s what we expected, proud of our guys all the way around, but the defense, they came up with play after player after play,” Baldwin coach Pohai Lee said. “It’s hard when you’re on the field that long, you’re getting winded a little bit, but again, that was the group that carried us this year. You know, we’re proud of them.”

After nursing a seven-point lead into the halftime break, the Mules found some breathing room on their first possession of the second half. 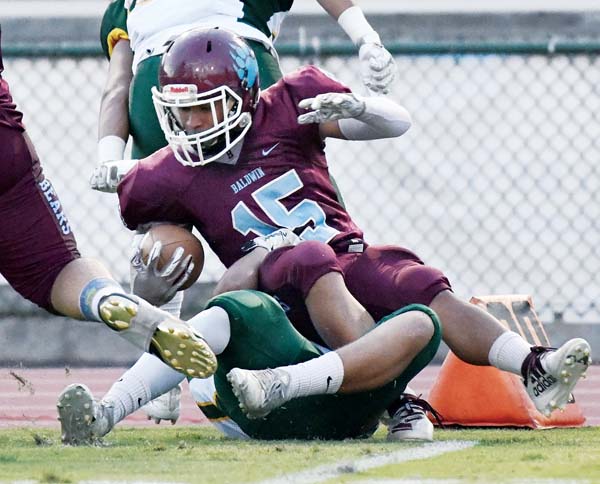 Leilehua started on its own 45-yard line after stopping the Bears on downs. Jemell Vereen ran on the first four plays of the five-play drive for 45 yards before Kekoa Turangan hit Jayzon Ramos for a 10-yard touchdown pass over the middle to make it 20-7 with 8 minutes, 1 second left in the third quarter.

Vereen finished with 174 yards on 28 carries to help Leilehua outgain Baldwin 398-231 for the game.

“I told you they’re explosive and they are fundamentally sound,” Lee said. “They do a lot of things well. It’s going to be a tough tournament, these last four teams.”

Kapena Kamai, the reception leader in the MIL for each of the last two seasons, finished his Baldwin career with six catches for 95 yards and the Bears’ only score on a 63-yard touchdown reception. 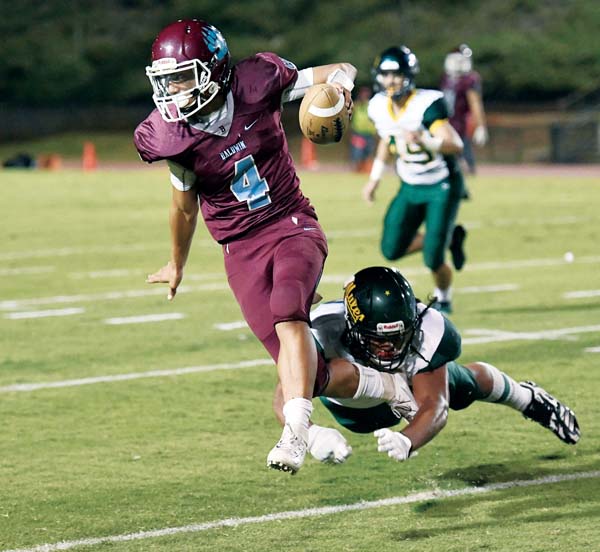 “Thank you for all our seniors on defense, even the younger guys,” said Kamai, who also lined up at cornerback all night long. “Josiah Sniffen, Chathen Foster, they all did great on defense. We stopped them, we just needed to move the ball more on offense.”

The Bears got a major break when they stopped a fake punt for a loss of 10 yards less than a minute into the fourth quarter, allowing Baldwin’s drive to start from the Mules’ 33-yard line.

Baldwin got a first down on an 8-yard pass from Laakea Asuega-Stark to Kamai on fourth-and-1, but three plays later Julyan Mebane picked off Asuega-Stark and then weaved through the Bears on the way to an 85-yard interception return for a touchdown that pushed the lead to 27-7 with 8:12 to play.

Leilehua added the final tally on a 7-yard scoring run by Vereen with 1:31 to play.

“Outstanding, they played really well,” Leilehua coach Mark Kurisu said of the Baldwin defense. “I don’t know what they had, two or three turnovers? But we knew they could play. Everybody who said they couldn’t, I don’t know what they were thinking about Baldwin. I was saying, ‘These guys can execute.” No. 2 (Kamai) was tough.” 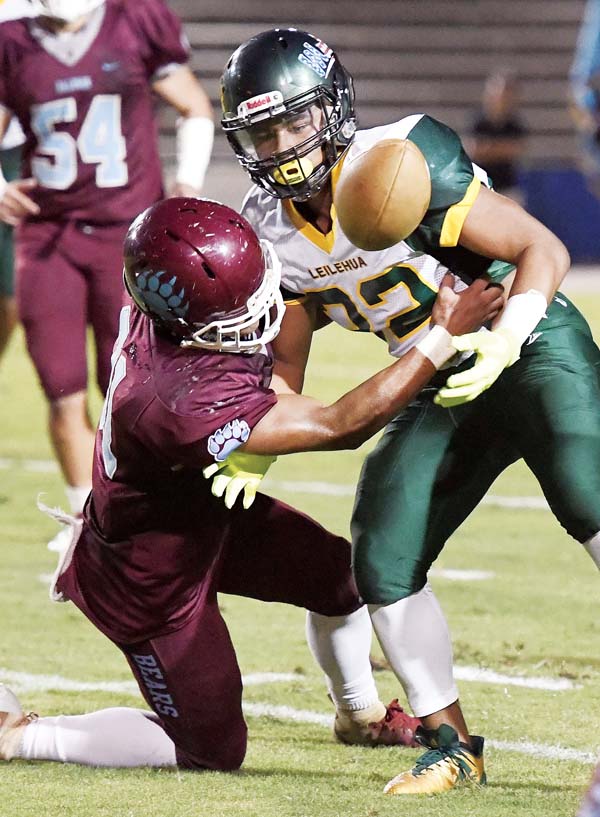 The Mules jumped on top 7-0 on the first play from scrimmage in the game. Kaleikaumaka Akagi took a reverse, broke one tackle near the line of scrimmage and rumbled 72 yards for a touchdown.

The Mules got deep into Bears territory twice but came away with nothing — Leilehua lost the ball on an interception by Josiah Sniffen at the Baldwin 16-yard line, and on the Mules’ next possession, the Bears stopped them on downs at the 12.

Baldwin could not do anything with the stops offensively. The first quarter ended with Leilehua leading 7-0 and owning a 150 to 46 advantage in total yards.

The Mules reached the Baldwin 37-yard line on their next possession before the Bears forced a fumble that was recovered by Jonathan Bacos.

On the next play, Baldwin finally took advantage of a turnover, scoring on the 63-yard lightning strike from Asuega-Stark to Kamai to tie the score 7-7. 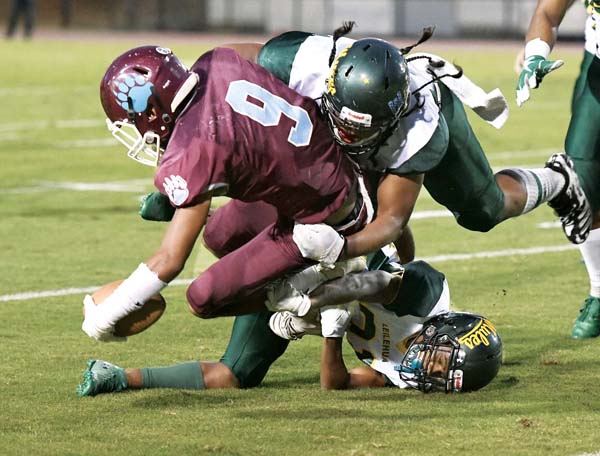 It was short-lived jubilation for the Bears as Akagi returned the ensuing kickoff right up the middle 91 yards for a touchdown.

Baldwin reached the locker rooms for halftime down just seven points after the defense toughened once more, forcing a field-goal try from 25 yards that Jonathan Breceda missed to the right with 3:37 left in the first half.

The Mules had first-and-goal from the 5 on the possession after a 33-yard catch-and-run by Jonathan Vasquez.

Leilehua got the ball back after forcing a three-and-out and a 15-yard punt.

Once more, the Bears came up big on defense, stopping the Mules after they had first-and-goal at the Bears’ 9. After a pair of incomplete passes, Nephi Laga sacked Turangan for a loss of 8 yards on third down and then the final pass was caught, but out of bounds with 4 seconds left in the half. 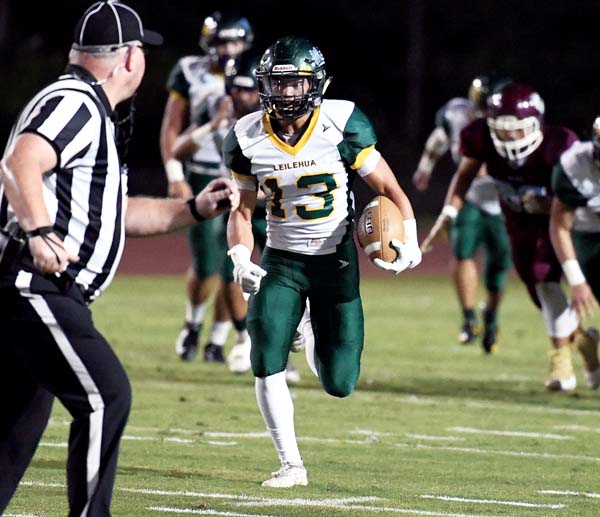 The Mules’ Kaleikaumaka Akagi returns a kickoff for a touchdown in the second quarter. -- The Maui News / MATTHEW THAYER photo

Baldwin said goodbye to 22 seniors Friday night. That class was instrumental in returning the Bears to the state tournament for the first time since 2016.

“Any time you take a step forward from the previous two years, you feel we’re moving in the right direction,” Lee said. “It comes down to the offseason and see who we have coming back, but at the same time we lose a great senior class. We’re going to miss them — they’re the foundation builders right now.”

Roosevelt at No. 4 Kamehameha Hawaii, 7 p.m.