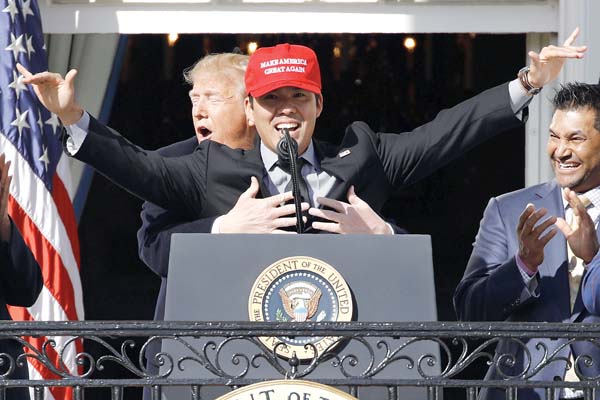 President Donald Trump hugs the Washington Nationals’ Kurt Suzuki as the catcher from Maui gives shakas during an event to honor the World Series champions at the White House on Monday. Standing at right is manager Dave Martinez. AP photos

WASHINGTON — President Donald Trump mostly stuck to sports on Monday while honoring the World Series champion Washington Nationals, who had a handful of players skip the White House visit.

Maui’s Kurt Suzuki wasn’t one of them.

The Nationals catcher traded in the team’s curly “W” for a “Make America Great Again” hat and received a big hug from the commander in chief.

Suzuki, not known to be politically outspoken, unsurprisingly received heavy critcism on social media. The Baldwin High School graduate said after the White House visit he was “just trying to have some fun.” 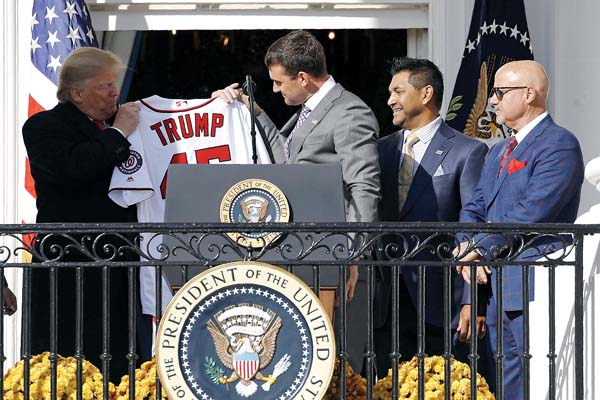 “It was amazing. That was the president. Just trying to have some fun,” Suzuki told USA Today Sports via text. “Everybody makes everything political. It was about our team winning the World Series.”

Amid an impeachment inquiry on Capitol Hill and Washington feting its first Major League Baseball champion since 1924, Trump received a No. 45 Nationals jersey from first baseman Ryan Zimmerman, applauding the team’s first title and calling it a “comeback story for the ages.”

“Everyone fell in love with Nats baseball,” Trump said during the half-hour ceremony on the South Lawn attended by thousands of fans. “That’s all they wanted to talk about — that and impeachment. I like Nats baseball more.”

Reliever Sean Doolittle, who along with his wife has worked with Syrian refugees and military veterans and supports gay rights, did not attend the event. Also among those not listed as attending were National League MVP candidate Anthony Rendon, outfielders Victor Robles and Michael A. Taylor, and pitchers Joe Ross, Javy Guerra and Wander Suero.

Principal owner Mark Lerner was the only member of the ownership group listed as attending.

Eighteen of the 25 players on Washington’s World Series roster were in attendance, including World Series MVP Stephen Strasburg, who opted out of the final four years of his contract but could re-sign for a more lucrative deal. Fans chanted “Four more years! Four more years” at Strasburg.

Despite Suzuki donning Trump’s signature hat and Zimmerman thanking the president for keeping the country safe and making it the best on earth, the Nationals’ visit did not have as much political undertone as when the 2018 champion Boston Red Sox visited the White House. They did so without manager Alex Cora, who did not attend that ceremony after citing his frustration with the administration’s efforts to help his native Puerto Rico recover from a devastating hurricane.

Washington manager Dave Martinez, whose parents are Puerto Rican, was in attendance and made some brief remarks to the delight of fans and players. Trump called it a record crowd, saying, “We’ve never had this many people on the front lawn of the White House.” The White House estimated an attendance of 5,300.

The U.S. Marine Corps band played the team into the ceremony with “Baby Shark,” which became the Nationals’ unofficial theme song as they went from 17-31 in May to World Series champions.

“It’s miraculous what we did,” NL Championship Series MVP Howie Kendrick said. “We brought a title back.”

After Trump singled out Strasburg, Kendrick, pitcher Anibal Sanchez and other playoff heroes, players exited with the World Series trophy to the strains of “We Are The Champions.”