Silent auction brings in over $20K for food bank 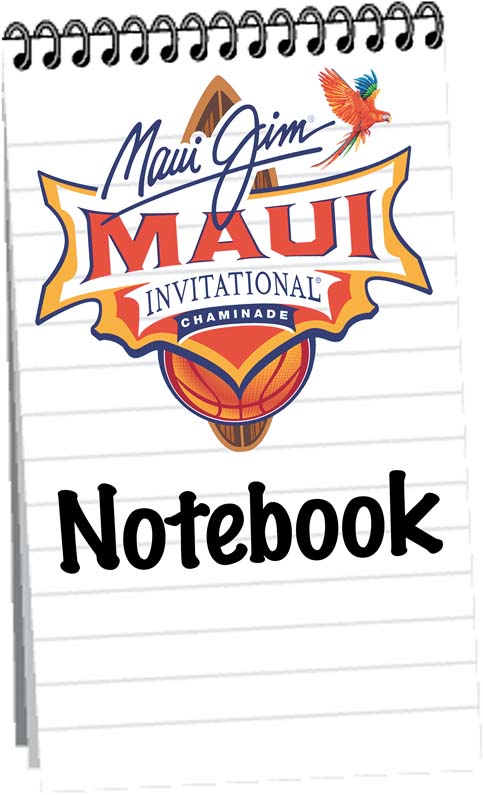 Over $20,000 was raised for the Maui Food Bank at the silent auction booth during the three days of the Maui Jim Maui Invitational.

“We’re just honored that the tournament gives back to the community, we just happen to be one of the beneficiaries of them giving back, but it just shows me that they want to help out the entire community here,” Maui Food Bank Executive Director Richard Yust said. “For the tournament to come in town so that we can generate more revenue for some more food for the mouths of the hungry, it’s a win-win for everybody.”

“It also gives the tourists and the fans an opportunity to take home a one-of-a-kind souvenir,” he added.

Many of the highest bids were made for a selection of basketball jerseys and basketballs autographed by the tournament’s coaches.

The big-ticket item, however, was a custom surfboard also signed by the coaches. It fetched $10,000 — the bidding was capped at that astounding price.

Yust recalled that the surfboard bidder “definitely didn’t want to be out-bidded.”

Yust said the food bank has been able to offer a total of about 250,000 meals in 11 years through its partnership with the Maui Invitational.

The field also includes two other former Maui champions: Indiana (2002) and Providence, which won the inaugural Maui Invitational in 1984.

The Friars aren’t the only team from that first tournament in next year’s field — Davidson is making its Maui return after going 0-2 in the four-team ’84 event.

Also coming to the Lahaina Civic Center for the Nov. 23-25, 2020 tournament are Alabama, Stanford, Texas and UNLV.

No rest for the weary

After an exhausting three games in three days, there’s little time for a breather for the Maui Invitational teams.

In less than a week, Michigan State hosts Duke in the ACC/Big Ten Challenge. While the Blue Devils won’t be the No. 1 team in the country anymore after losing to Stephen F. Austin on Tuesday, it won’t make for any less of an electric atmosphere at the Breslin Center next Tuesday as two of college basketball’s power programs face off.

The Blue Devils then go from one Maui team to another as the they travel to Blacksburg, Va., to take on Virginia Tech on Dec. 6.

Kansas also has a ranked opponent up next as the Jayhawks host No. 21 Colorado on Dec. 7.