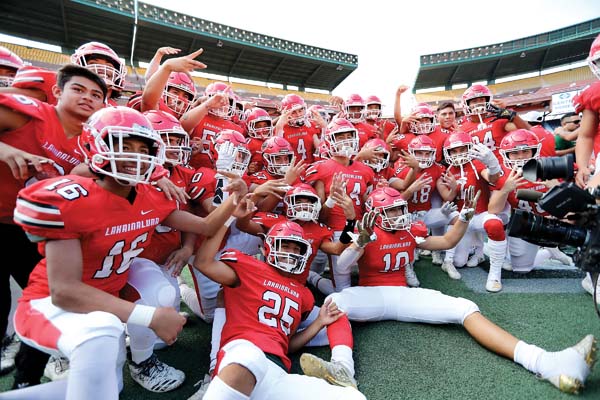 HONOLULU — The deciding moment came on his 31st carry of the afternoon and Joshua Tihada made the most of it, just as he has for his storied four-year career at Lahainaluna High School.

He slammed into the line of scrimmage, bounced free to the right side and found nothing but green turf in front of him.

But then again, Tihada simply ran over the Warriors all game long as his offensive line and fullbacks paved the way — the senior running back rushed for an all-division single-game state-record 310 yards and all three of his team’s touchdowns on 36 carries.

“You know, I feel great right now, me and my boys out here, we just worked really hard just for this moment and it’s a blessing,” Tihada said. “Yes sir, those guys in front of me made a big impact in my career here and I appreciate them so much.” 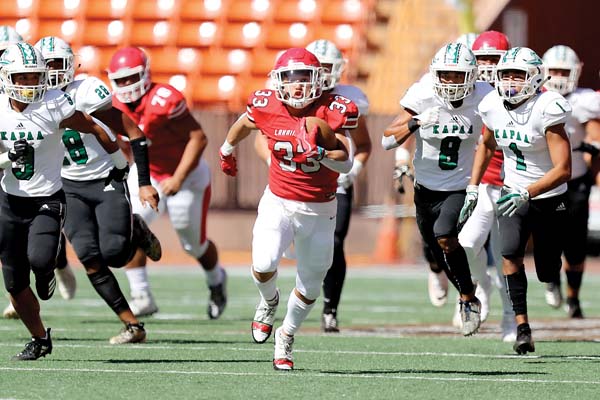 Tihada ran for more yards in nine career state tournament games than he ever did in a Maui Interscholastic League season. When he walked off the Aloha Stadium turf on Friday, he totaled 1,087 yards and 18 touchdowns rushing on 176 carries in state tournament play. His 19 total state touchdowns are seven more than anyone else.

“Just from my freshman year, different guys buying into the process, I just love them all,” said Tihada, who has been attending Lunas’ practices with his father, Joey Tihada, since he was in the first grade.

Lahainaluna’s defense held the Warriors (7-1) to 212 total yards and had six tackles for loss totaling 25 yards.

“It was a lot of expectations, it was a lot of work ethic out there,” said Lunas two-way lineman Tuipulotu Lai, who along with Tihada, Derek Perez and Nainoa Irish will receive his fourth state championship ring in the near future. “We came out here mentally prepared and we just wanted it more — we were more hungry. We just wanted to do it for our community, just playing for our people.”

Lai shook his head when asked about Tihada’s exploits. Tihada carried the ball on 36 of the Lunas’ 51 plays from scrimmage, and he accounted for all but 29 of their total yards. 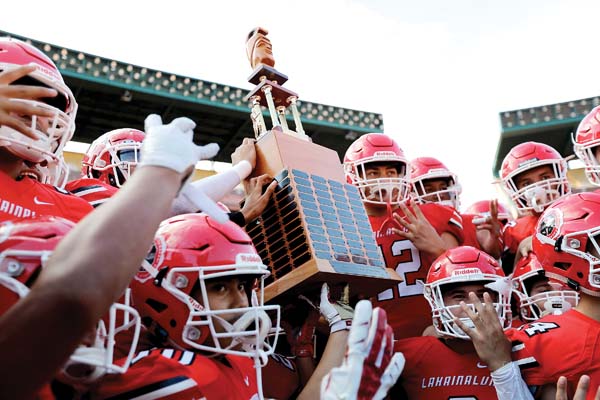 “Man, Josh Tihada is like unbelievable,” Lai said. “He’s a great kid, he’s a great student-athlete, but it’s about the team. If it wasn’t for the O-line and anybody else out there blocking for him to get that yardage, it wouldn’t have happened.”

Irish, who moved to linebacker this season after playing quarterback for most of his career, echoed those sentiments.

“We couldn’t have done it without the team,” Irish said. “In the beginning, we were kind of struggling — people were just playing their own ball — but towards the end of the season we started coming together and playing as a team. It was, ‘Just do your job, do you and we’ll win.’ “

Perez smiled when asked about blocking for Tihada. Perez was the Lunas’ second-leading rusher with 15 yards on five carries.

“It’s a blessing, you know, blocking for him,” Perez said. “Everybody has their own part in this team. If you’re a blocker, you block, and if you’re a runner, you run the ball. He did a great job and he always does what he does. Nobody runs harder than that guy — he knows what he’s doing, that’s why.” 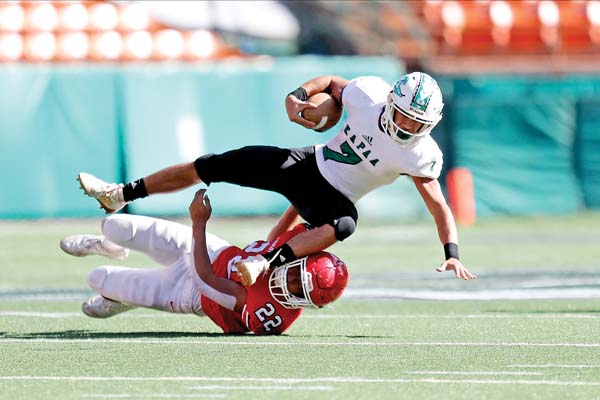 Dean Rickard is in his first year as Lahainaluna’s co-head coach and offensive coordinator, but he has been with the program for more than 20 years.

“Well, very proud of this team and how far we came since the beginning of this season,” he said. “This is the culmination of their hard work. It’s a great win, no doubt, especially (against) a great team in Kapaa.”

Tihada, who has set so many records this season it’s hard to keep track, broke the HHSAA Division II state tournament single-game rushing record with his third rushing touchdown and 67th end-zone trip of his career. He broke the all-division mark of 283 yards by Waipahu’s Alfred Failuga set in 2017 two carries later on a simple 2-yard dive with 4:13 to play.

The Lunas broke on top on Tihada’s 4-yard scoring run on their first possession. Tihada’s 21st touchdown of the season in all games capped a nine-play, 89-yard drive that featured a 55-yard run by Tihada to the Kapaa 25-yard line. 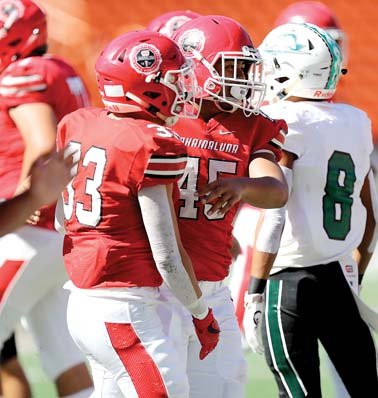 The Warriors tied the score on the ensuing possession when Baba Na-O dove in from inside the 1. They took 10 plays to go 71 yards and trimmed 4:33 off the clock.

The Warriors closed within 14-10 on a 23-yard field goal by Laakea Gonsalves with 20 seconds left in the half, but they left a couple of golden chances to tie the score before halftime on the field on the same drive that covered 51 yards in 11 plays.

The third quarter was scoreless, but the Lunas kept grinding away with Tihada in the wildcat formation for most of the game, and it paid off with his final touchdown with 8:16 to play.

Tre Rickard intercepted a Cody Relacion pass with 4:23 to play to put the game away. 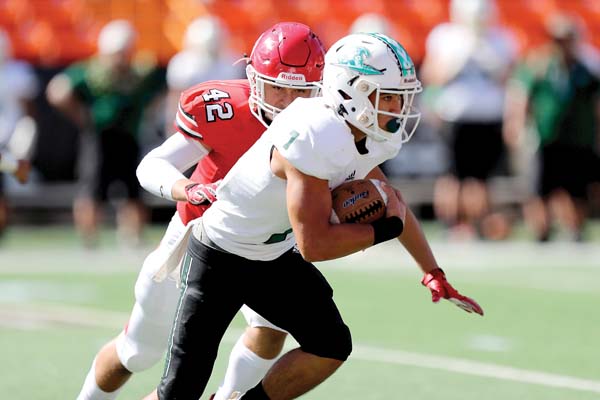 “Hat’s off to the Lunas,” Kapaa coach Philip Rapozo said after watching his team lose for the fifth straight time to the Lunas, three of them in state finals. “They got the job done again. We were blessed to have an opportunity.” 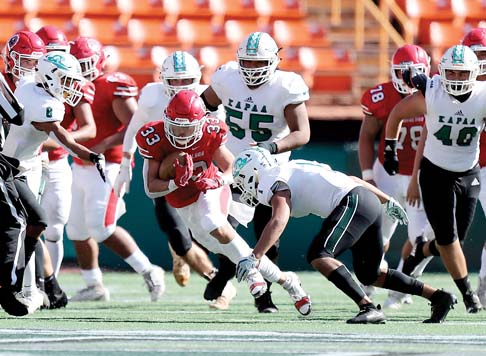 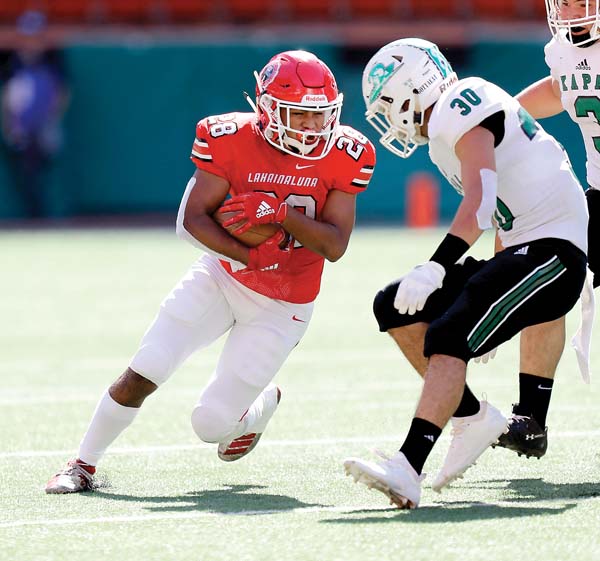 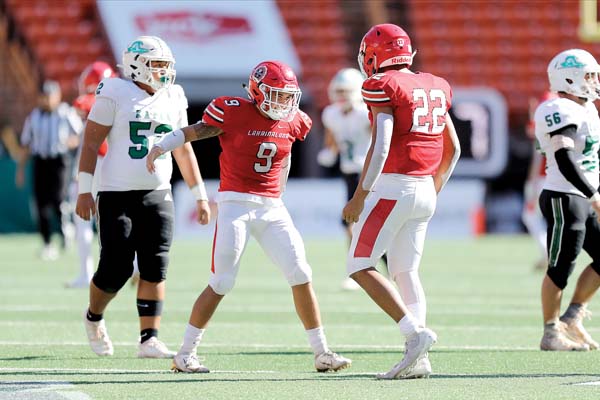