While no guarantee of success, Maui Jim Maui Invitational continues to be showcase of talent 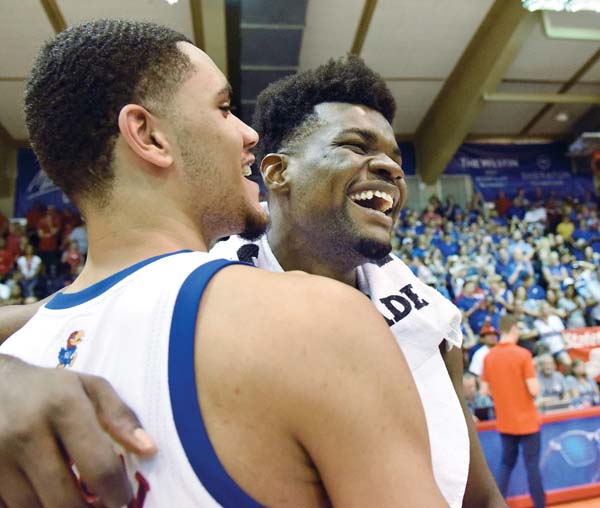 LAHAINA — The Maui Jim Maui Invitational was the first Thanksgiving week event of its kind when it debuted 36 years ago.

While there has been a remarkable rise in the number of college basketball tournaments that mimic it, the Valley Isle event still stands alone as far as its draw with the blue bloods of the sport.

No. 4-ranked Kansas won the 2019 tournament on Wednesday with a nailbiting 90-84 overtime win over a Dayton team that stamped itself as a mid-major team that appears ready to make a lot of noise this season.

Kansas won here in 2015 on its way to a 33-5 record and appearance in the Elite Eight of the NCAA Tournament. While success here is no guarantee of anything, it certainly shows what teams have the potential to succeed.

“I don’t know if it helped us a ton last time, because we lost it in ’11 and went to the national championship game,” Kansas coach Bill Self said after Wednesday’s final. “I think what the tournament does more than anything, it exposes your weaknesses and allows you to prepare and get better for really big-boy games. Because that was a big-boy game. And so the tournament is tremendous.” 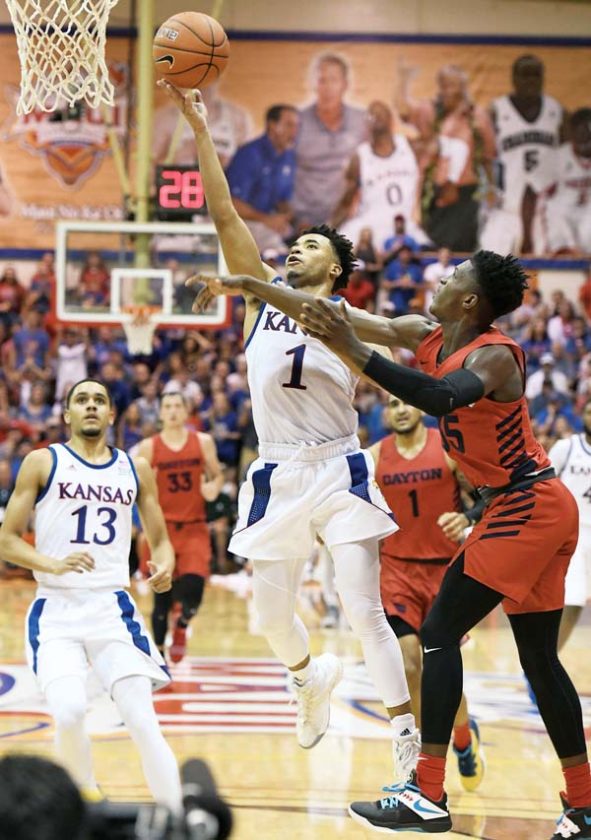 Kansas’ Devon Dotson puts up a shot as Dayton’s Dwayne Cohill defends in the second half Wednesday.

Self said getting to the championship game here only makes the desire to walk away with the Wayne Duke Trophy that goes to the winner more enticing.

“And, of course, if you win two games, just like Dayton feels, I’m sure, you’re going to play a third, you might as well win it,” Self said. “So we would much rather win it than not win it. But I’m not sure the win will have a ton to do with what we do going forward. It’s still November and I would like to think that that automatically puts us in a very good or favorable position.”

Self’s team will next play No. 21 Colorado on Dec. 7 at Allen Fieldhouse.

“If you don’t play well against Colorado, who is a top-20 team, next Saturday, then this probably didn’t mean as much,” Self said. “So hopefully it’s just a springboard for enthusiasm and energy to excite our guys that we got a chance to be good if we just continue to get better.”

The Flyers are likely to find themselves ranked when the next poll rolls around on Monday. A win over Kansas would likely have launched Dayton into the top 10.

“I think coming into the tournament we felt really good about what we had. Every game you get challenged differently,” Dayton coach Anthony Grant said. “So six games into it, I think we know some things more than we did three days, three games ago. But it’s six games in and there will be all types of challenges.”

Grant will guard against complacency.

“The one thing I think all of us in the room that have been watching basketball for a while, you don’t, you can’t act like you’ve got anything figured out, because you don’t,” he said. “At the end of the day we had a chance today to compete for a championship against a great team. This was about what Kansas did. They did a great job of being able to come in here and win a championship and we had opportunities.

“So we’ll go back and we’ll learn from this and hopefully it will make us better for the next game to come and the games after.”

“I think if you go back through the years this tournament has provided the best of the best, giving it’s springboard out of anonymity into stardom,” tournament chairman Dave Odom said between games on Wednesday. “You go back to 2008, 2009, Kemba Walker. Nobody knew Kemba Walker when he came over here and when he left everybody knew him.

“You go back and look at some of the really, really climactic games, games that have gone into overtime. A year ago, you had Duke and Gonzaga, Gonzaga winning that one. Kansas and Duke played that classic one in 2015, then you go back even further, there are others.”

Odom said that the help the tournament provides to participants will not become clear until the season progresses a little further. No. 1-ranked Duke will play Michigan State and Virginia Tech — both participants here this week — within the coming week.

Dayton’s Obi Toppin and Georgia’s Anthony Edwards both had breakout performances here that placed them on the all-tournament team.

“I think what this tournament does, it gives people a chance to really appreciate teams like Dayton, who came into this tournament well-qualified to win it,” Odom said. “But America didn’t know it. Now they do. That’s the beauty of it.”

The Maui News Four girls and four boys from the Maui Interscholastic League received top seeds for this week’s ...