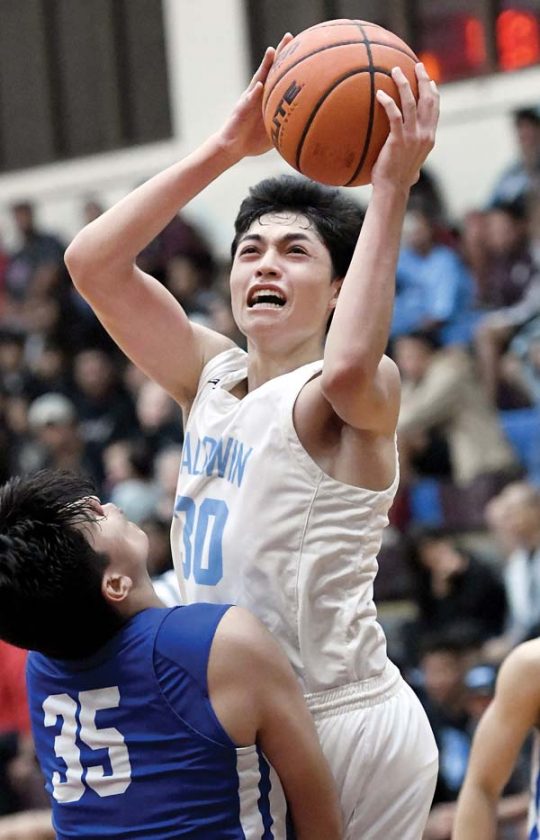 The Baldwin High School boys basketball team climbed back to a familiar spot at the top of the Maui Interscholastic League Division I ranks this season.

Maui Preparatory Academy made a startling run in Division II in year one of its varsity program.

Both of those special seasons were built behind the prowess of The Maui News MIL Players of the Year as chosen by the league’s coaches: Kuikawa Ross for the Bears in D-I and Drew Triplett of Na Pueo in D-II.

Both wing players — Ross is a 6-foot-2 senior, Triplett is a 6-1 sophomore — were quick to give credit to their teammates. Baldwin won its first MIL crown in six years, while MPA advanced to the MIL tournament championship game before losing to Seabury Hall.

“It’s exciting — it took a team effort to reach our goal this year,” Ross said after the Bears won their first MIL crown since 2014. “And I think all the coaches and the team put us in a good position to win and achieve our goals.” 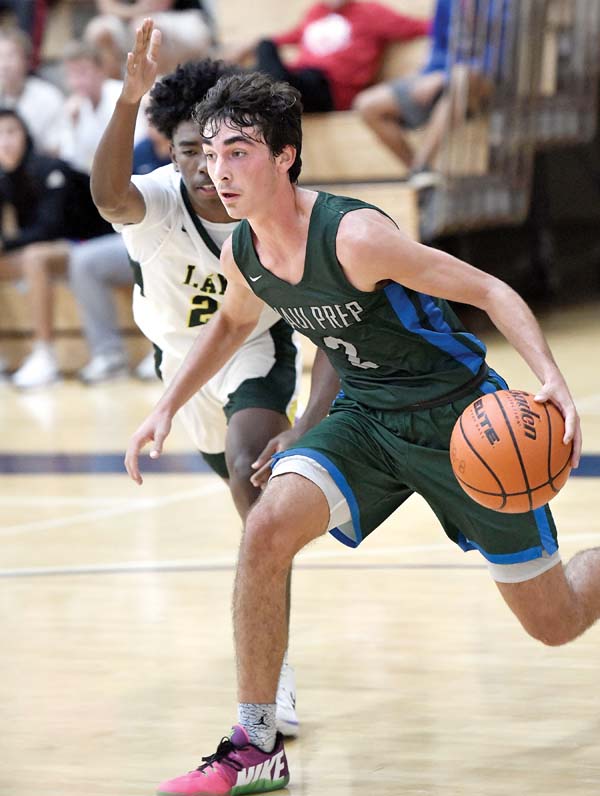 Ross was a unanimous choice among the league’s coaches as D-I Player of the Year. He is joined on the first team by Baldwin teammate Holden Ioanis, Lahainaluna’s Tre Rickard, Maui High’s Efren “J.R.” Villon and King Kekaulike’s Carson Yoshida.

“I think it was a big deal — we put a lot of work in in the offseason,” Ross said of the Bears’ MIL title season that ended in a sixth-place finish at the state tournament. “And I think it showed and hopefully these guys can continue working hard and keep the winning at Baldwin.

“I think we set a good example for the younger kids to work hard.”

Ross’ college itinerary is studying at the University of Nevada-Las Vegas with the plan of becoming a pharmacist. His basketball plans could include a walk-on attempt at UNLV or playing somewhere else where he could also study pharmacy.

“I like science and the medical field,” said Ross, who carries a 3.9 grade-point average. “This year I have forensics, but I always loved chemistry.”

Ross’ father Raymond was a co-MIL Player of the Year in 1986 while playing for the Bears, along with Lahainaluna’s David Carvalho.

“I told my dad, he’s really proud because he put a lot of work into training me all these years,” Kuikawa Ross said of his award. “This is, like, a big moment to make him proud.”

Lahainaluna’s Nick Webb was the choice of his peers as D-I coach of the year after leading the Lunas to the state tournament in his first season on the job.

While Ross knows he is moving on, Triplett is not positive where he will playing basketball next year after a debut season for the ages here.

Triplett broke the MIL single-game scoring record with a 53-point performance against Molokai, a total that is No. 3 all-time in the state according to statistics compiled by Jerry Campany of the Honolulu Star-Advertiser.

According to statistics provided from MPA after watching video of Na Pueo’s MIL games, Triplett averaged 25.5 points, 14.3 rebounds, 5.7 assist and 4.0 steals and had three triple-doubles.

Triplett is joined on the MIL D-II first team by Masyn Johnson and Joaquin Donez of Seabury Hall, Kaimana Baker of St. Anthony and Andre Adams of Lanai.

Seabury Hall coach Scott Prather is the choice of his peers as D-II coach of the year after leading the Spartans to their 11th straight MIL crown.

Triplett’s family moved to Maui over the summer after he was a junior varsity player last season at Camas High School in Washington state.

“This whole experience has been really humbling, and now this aspect of it as well,” Triplett said. “I couldn’t have done it without my team and even the other teams for that matter. They were lifting me up throughout the whole season, too. A lot of them knew it was my first year and they wanted me to have a good time and enjoy it.”

Triplett said he loves MPA and the family feeling there, but there is the possibility that he may move back to the Mainland as soon as next season. Then again, the MIL D-II ranks may have two more seasons to try to find a way to defend him.

“It was a lot of fun,” Triplett said. “Last year when I visited the school, there was a lot of mention that they were starting a first-year varsity program. And to a lot of people that might not be the most appealing, but it excited me.

“I really wanted to be a part of it and be a part of the community growing around it. This year we received a ton of support, more than (anyone) would have imagined — from people within the Maui Prep community as well as people outside of it.”

Na Pueo had five sophomores, one freshman, one junior and three seniors on the inaugural varsity roster.

“It’s just been amazing to have everybody kind of come together and have one goal in mind: ‘Just to make it as far as we can, (try to) win the championship and grow the program as well as we’re able to — establish a good foundation.”