Fernandez’s season abruptly ends, but it was a good one 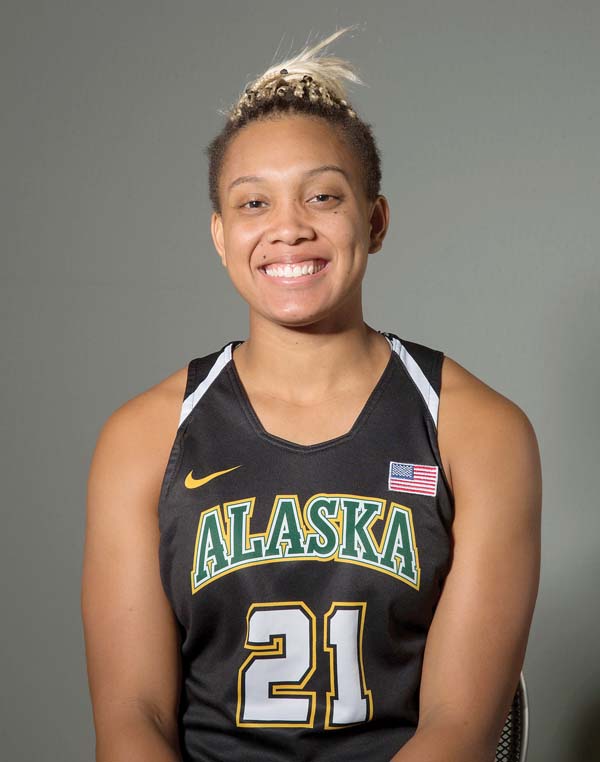 Her sophomore season ended with a sudden, abrupt thud completely out of her control, but Kimani Fernandez is clearly growing into a key member of the University of Alaska-Anchorage women’s basketball team.

The Kamehameha Schools Maui graduate averaged 3.4 points and 3.7 rebounds for the 31-2 Seawolves, who were in the NCAA Division II West Regional set to start today in Honolulu before the rest of the season was canceled by the NCAA on Thursday due to concerns about the coronavirus pandemic.

Fernandez, who formerly went by the hyphenated last name Fernandez-Roy, started seven times and played in 31 games this season for UAA.

“I know I always feel a lot better coming back to Hawaii, being able to play here because it’s just warmer,” Fernandez said via phone from Honolulu on Wednesday before the regional had been called off. “I would say it was a little warmer than usual when we left, maybe around 30 (degrees). It was warmer, but not quite Hawaii temperature.”

She also was a member of the 2019-20 Great Northwest Athletic Conference Women’s Basketball All-Academic Team in her first year of eligibility with a 3.77 grade-point average in her psychology major. 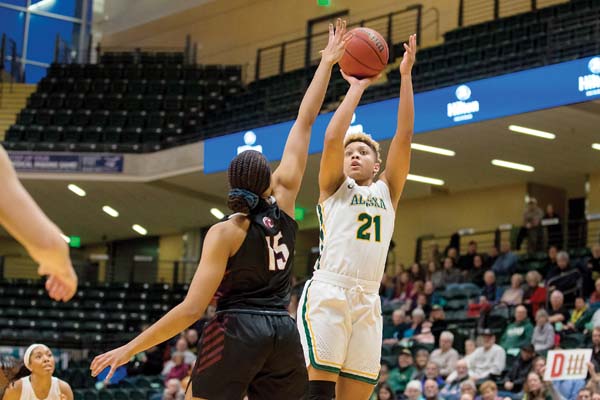 Kimani Fernandez, a Kamehameha Schools Maui graduate, has developed an outside touch by taking 500 shots a day after practice this season for the Alaska Anchorage women’s basketball team. University of Alaska Anchorage / Skip Hickey photos

“If everything goes as planned, I’m hoping to eventually be a mental and physical therapist for people with PTSD (post-traumatic stress disorder),” Fernandez said. “Hopefully finish getting my degree either in the Navy or armed forces, I have no idea yet.”

Reached on Thursday after the announcement of the cancellation of the rest of the season due to the coronavirus outbreak, Fernandez said she could not comment on the NCAA’s decision and that her travel plans are up in the air as the school itself wrestles with what to do in the immediate future.

There is no doubt that her future at UAA is bright on the basketball floor.

“She’s been really valuable, I think in a lot of ways, both on and off the court because she’s a good student,” UAA coach Ryan McCarthy said Wednesday. “And as a returner from last year’s team, she was really instrumental in helping the new players to the team buy into our culture and the things that we require of everyone. Kimani’s kind of filled a little bit of a leadership role there.

“Then on the floor, she’s just such a good athlete. I think she’s kind of coming into her own right now.” 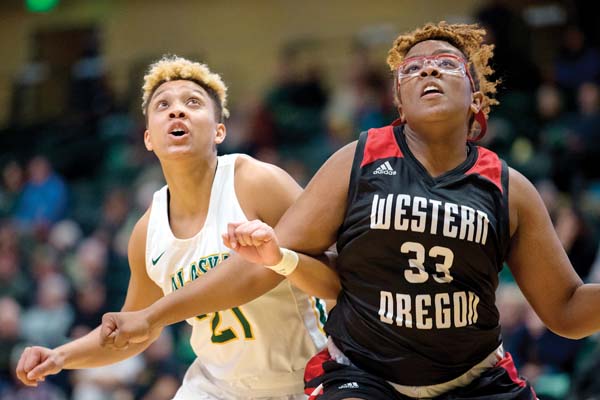 Kamehameha Maui graduate Kimani Fernandez, shown here in a game against Western Oregon, has become a stong leader this season for the Seawolves.

Former Lahainaluna standout Cameron Fernandez has stepped away from basketball to improve her mental health after playing six games in an injury-plagued season last year for the Seawolves. Fernandez started her college career at Washington State.

“I stream their games when I can, and they are still dogs on the court,” Cameron Fernandez said, adding that she specifically focuses in on Kimani Fernandez. “She’s been doing great, she’s improved so much since just her freshman year. I mean, her shot got better, the way she reads and reacts on defense got better. Everything as an all-around player, she’s improved tremendously.”

The Fernandezes learned they are distant cousins when both arrived in Anchorage.

“It was tough losing Cameron and having her leave, but I think she’s doing what’s best for her,” Kimani Fernandez said. “I’m really happy for her where she’s at now because … she seems really content with what she’s doing.

“It was tough losing her and not having that other piece of home in Alaska, but I have a really big family out here with the team.”

Kimani Fernandez emphasized the family part of the Seawolves’ program.

“That’s made it a lot easier for me and a lot of the team this year I consider family,” she said. “I think it is extremely helpful (to the team). We’re all really competitive in practice, and we won’t go easy on each other and all that, but at the same time we really do love one another.

“Having that tightknit kind of group is, I think, really beneficial because it helps us with our chemistry on the court, it helps us be on the same page.”

Kimani Fernandez said her own game now includes 3-point range on her jumpers. She takes 500 shots after practice every day.

“My personal basketball game has excelled tremendously,” she said. “In high school, I maybe attempted one 3-point shot my senior, and now I feel so much more confident in my shot. … I can take a shot and know it’s going in because I have improved that aspect. I’m more confident with my room on the floor, defensively I have excelled in that aspect as well.”

Kimani Fernandez’s mother, Cia Goods-Fernandez, lost her battle with cancer at the age of 43 in November 2018, just as Kimani was starting her basketball career. Goods-Fernandez was an All-American volleyball player at the University of Hawaii.

“It’s actually tough every time I come back home not being able to see my mom,” Kimani Fernandez said. “I think about her, like, every day I do think about her. Some days, it’s a lot harder than others because something I see or something that may remind exactly of her. And it’s only been around a year and half and I still miss her every day, all day. It’s definitely tough, but I know she’s with me, and I know I hold myself to make her proud every day.

“I know that where I am right now would make her really proud, so I just go about every day knowing that my mom’s still with me and that she would be really proud.”