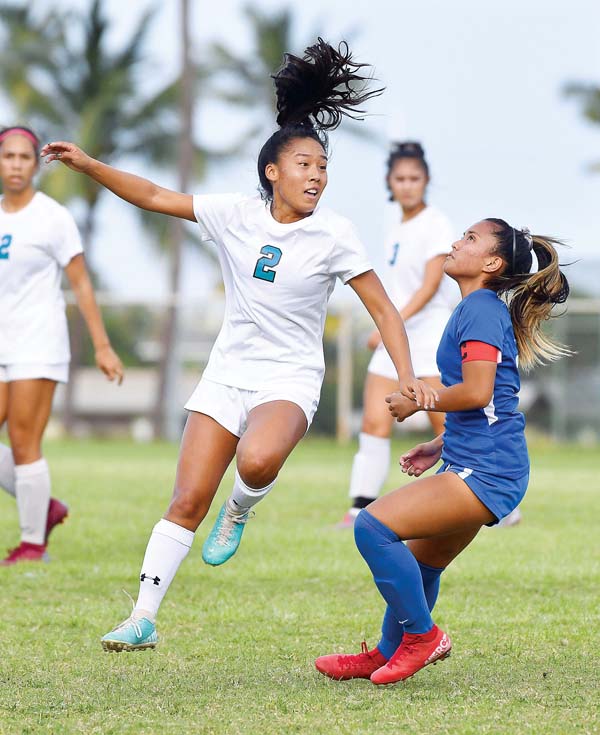 King Kekaulike High School’s Teani Arakawa follows through on a header in front of Maui High’s Lauren Mitra during an MIL match in January. The Maui News / MATTHEW THAYER photo

It was simply the best season in the history of the King Kekaulike High School girls soccer program.

Na Alii advanced to the state championship match for the first time in the 25-year history of the program. While they lost a 1-0 decision to Kamehameha Kapalama in the state final, it was a match either team could have won.

Earlier in the season, King Kekaulike entered uncharted territory for the program, winning the Maui Interscholastic League title for the third straight year, another first in program history.

As the program has firmly established itself at the top of the MIL, the current journey up the ladder has been led by junior midfielder Teani Arakawa.

Arakawa scored 18 goals, had numerous assists and was the choice of the league’s coaches as The Maui News MIL Player of the Year for the second straight season. 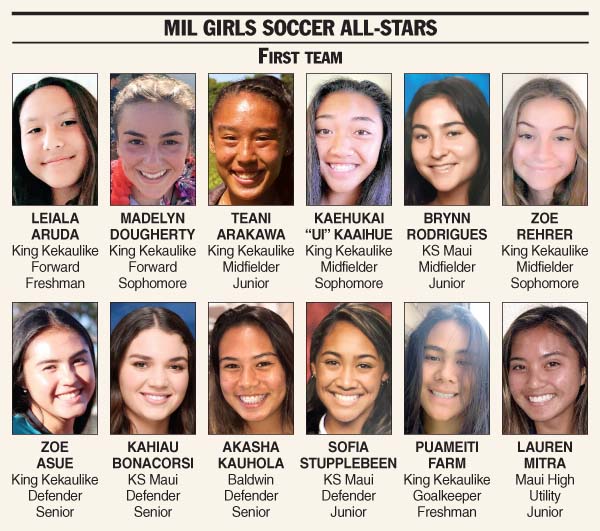 “I feel that getting MIL Player of the Year for the second time is very, like, such an honor to have,” said Arakawa, who was also named state offensive player of the year by scoringlive.com.

Arakawa is one of seven Na Alii players to make the MIL 12-player first team.

“This season was pretty awesome with this group that we had this year,” Arakawa said. “We made it farther than last year, making it in to the state final, which is pretty amazing.”

And there appears to be no question that the close-but-no-cigar scenario Na Alii endured this season will drive a young, talented team into next season.

“Honestly, I feel we could have had that match — we just couldn’t find our opportunities to get it in the net,” Arakawa said. “But, yeah, I feel like we could’ve won. And we should’ve.”

Arakawa added that “Next year, we’re going to have to work even harder because we have to fill in positions, mainly in the defense, but we’ll have the majority of the girls we had this past year.

“To me, I know everybody will want to stirve to get another MIL title, go back to states, and probably want to get to the finals and maybe, hopefully, win a state title.”

King Kekaulike head coach Gundi Dancil has been at the helm since the program began in 1995, and assistant Ken Hayo has been there for 20 years.

“I honestly love playing for them because they always give positive feedback to each and every one of us, they push us to do our best and they just train us hard,” Arakawa said.

Dancil was the choice of his peers as MIL Coach of the Year, but he knows he couldn’t have done it without his players and coaching staff that also includes David Makua, Ronnie Kihara, Kelli Ganiko, Tiera Arakawa and Melanie Yepez Gomez.

It all starts with Teani Arakawa, whose progress has matched the team’s. King Kekaulike lost 4-1 to Kaiser in the quarterfinals of the state tournament in 2018, then fell 6-0 to Kamehameha Kapalama in the semifinals in 2019.

This season, Na Alii opened state play with a 1-0 win over Punahou and a 2-0 win over Pearl City — both traditional state powers — to make the final where they nearly denied Kapalama a 10th state title.

“Truly, she’s a good leader, she was our captain, she became a captain her sophomore year, and she led more by example her sophomore, but her junior year she matured into a great captain, using her voice and her example on the field,” Dancil said of Arakawa. “Also, taking charge of the offensive side of the team. She works hard, very high work ethic, and she just continues to build her skill as far as being a complete player.”

Arakawa may have been at her best in the state final considering she suffered an upper-thigh injury the night before.

“At the championship game, she came in, she played strong, but she was injured from the game before,” Dancil said. “She managed to work through that and created great opportunities for the team.

“I wouldn’t say her second gear, but her third gear, as far as going through and following through with players, but she utilitized her teammates and created good options for them with her passing.”

Arakawa poured in goals during an 11-1-1 season, she also set them up all season long and is the unquestioned leader going forward.

“Throughout the season she did that even though her and Ui were the high scorers for the team, but she had a lot of assists through the season,” Dancil said. “Even during the offseason, when I’m trying to get the team together to do some other things, as far as community service, things we do for the school during the offseason, she’s there to help.”