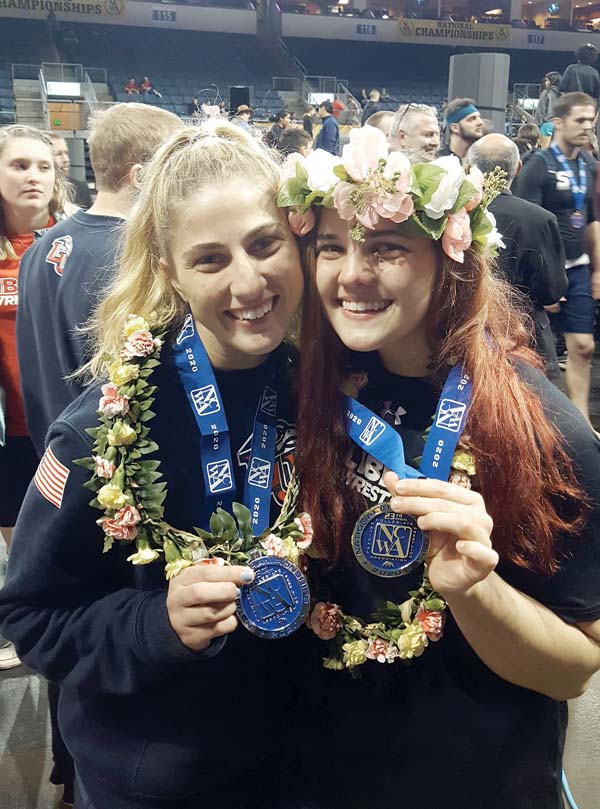 The first family of Molokai wrestling has also established an impressive presence at Liberty University in Lynchburg, Va.

Manley’s two daughters — Cendall and Charisse — followed in their father’s footsteps to Liberty and collected five national titles along the way.

Cendall Manley, a state high school champion as a Molokai senior, was the first female wrestler at the school and won four national titles in folkstyle competition at 132 pounds.

“Yeah, honestly it’s kind of amazing when I look back at my high school career and having a mixed bag, but not being exceptional in the awards that I got up until my senior year when I won, my first three years I finished fifth every time,” Cendall said. “Then to go from that to go into college and go to a school that didn’t have a women’s wrestling program, to be given the opportunity to be the first women’s wrestler there.” 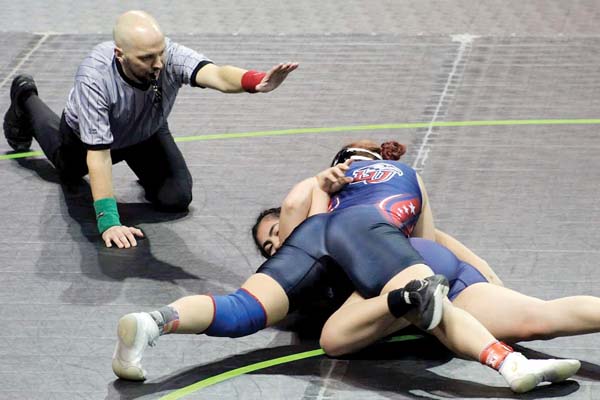 Cendall Manley gets a pin during the national championships. — SHERRY RICHMOND photo

She arrived at the school hoping to be a manager for the men’s team, but she talked to Castro and the women’s team was born.

“Then you go from that to winning four titles, it was really honestly not even an expectation because I didn’t even think it was a possibility,” Cendall said. “So, it’s really fun to look back and be, like, ‘Wow.’ God has ordained so much for me that I wasn’t even able to dream for myself because I didn’t even know it was an option.”

Charisse Manley had a bachelor’s degree in elementary education from Azusa Pacific and a master’s from Chaminade in hand when she joined her sister two years ago to work on another master’s degree at Liberty — she won a national crown last season and finished second this season at 155.

Randy Manley met his wife Louise at Liberty before graduating in 1987 and their entire family of five children — the sons are Clinton, Colton and Caele — are all accomplished wrestlers.

Clinton was a three-time HHSAA runner-up before going to the Air Force Academy and serving five years in the U.S. Air Force — he has been an assistant pastor under his father for the last couple years on Molokai and recently landed a church job in Georgia. 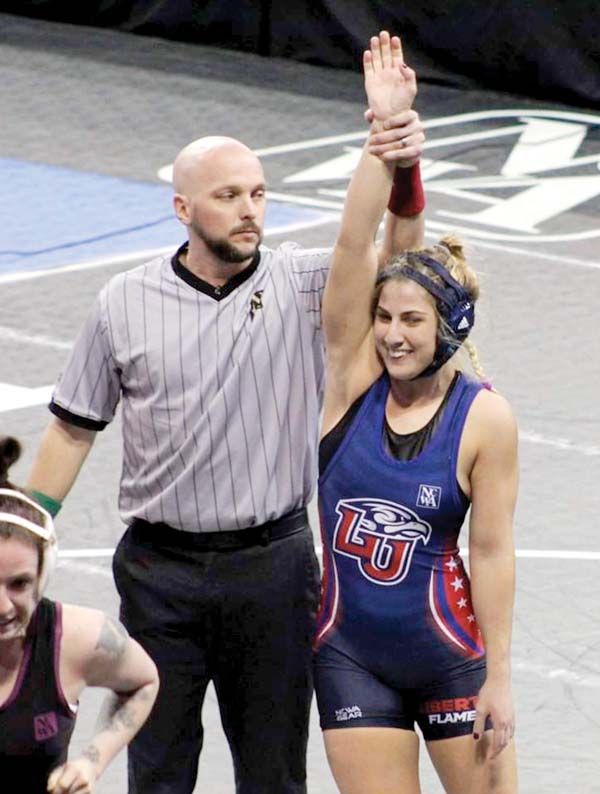 Charisse Manley gets her hand raised after winning her championship match in 2019. — SHERRY RICHMOND photo

Colton has spent the last several years as a missionary in Haiti before having to evacuate due to the coronavirus pandemic, and Caele is currently competing for Wheaton College in Illinois.

“When I was trying to decide on a school to go to when I graduated from high school, I was having a really hard time deciding and I really wanted to go to Liberty because it was my parents’ alma mater,” Cendall Manley said. “It was like a new adventure.”

Now, although the future is somewhat in question, the Manley sisters are hopeful to return to Lynchburg to run the women’s team, Cendall as a graduate assistant and Charisse as a paid assistant coach. With the unknown surrounding the pandemic, those positions still must be approved.

“My dad said ‘stay involved with the team there and something will maybe open up and you’ll get an opportunity to wrestle,’ “ Cendall Manley recalled. “And that’s how it did end up happening. It was just amazing to go to the same school as my dad and wrestle for the same guy that my dad wrestled for. Then my sister came two years later and did the same thing.”

Charisse Manley had not wrestled since high school with the exception of practices with the Molokai team during Christmas break, but the skill had clearly not left her. 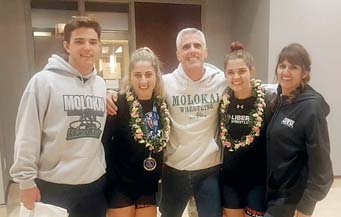 The Manley ohana — (from left) Caele, Charisse, Randy, Cendall and Louise — pose for a photo at the 2020 nationals. — SHERRY RICHMOND photo

“Honestly, I paralleled her a little bit because I had no idea that this would be part of my future at all,” she said. “When I finished up my first master’s degree here on Oahu while I was teaching and I didn’t really know what the next chapter was going to be my dad said, ‘Well your sister is wrestling at Liberty, so why not go and get some more school — you’ve always loved wrestling.’ “

She was injured her senior year at Molokai and had not been looked at much by colleges for the sport she loves, leaving as bit of a hole in her heart.

“That was really hard for me to think about,” Charisse said. “But I was, like, ‘Well, there’s nothing I can do.’ It was really precious that the Lord, like, spurred that dream of mine, so I just put myself out there, contacted coach Castro.”

With Castro focused on the men’s team, Charisse Manley ended up being a player-coach for her two seasons at Liberty.

“I asked him if I could wrestle on the team my sister was on, but he said, ‘I’d like you to take it a step farther. You can wrestle and compete, but I’d also like you to run the team because I’m working on the men’s side,’ “ Charisse said. “I was, like, ‘OK. I’ve been in the classroom the last two years, so I guess I could take those skills and apply them to running a team as best as I could.’ “ 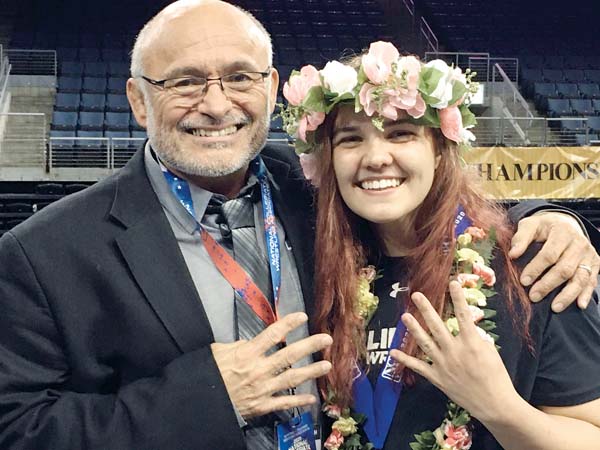 Castro is hopeful he has the Manleys back when school starts again — there is currently a hiring freeze due to the pandemic.

“It really is a remarkable story,” Castro said. “I became friends with Randy Manley back in the 1980s and went to his wedding, the whole bit. So, to have his daughters come wrestle for me has just been fantastic.”

Castro said he could not have chosen a better pioneer in the women’s team than Cendall Manley.

“She’s obviously a great representative, not just on the mat, but as a person in light of her character, the type of young lady that she is and the wonderful family she comes from, she clearly is what Liberty University is all about,” Castro said. “So for her to succeed like this and be part of the embryotic stage, if you will, for Liberty women’s wrestling I think is remarkable.”

He had a special spot in his heart for Charisse as well.

“They feed off each other, (Charisse) comes from Hawaii to take advantage of the opportunity to wrestle alongside her sister,” Castro said. “They’re pretty close — they feed off of each other. I’ve never witnessed a negative word between the two of them. Knowing the parents, you know they were brought up with a strong work ethic. They’re just so loyal, the whole family.

“They’ve essentially been our coaches in the women’s program.”

* Robert Collias is at rcollias­@mauinews.com