Sione Lolohea tries to elude a tackle during the Las Vegas Invitational Rugby Sevens tournament in March 2019. Lolohea is headed to Life University, which has won four of the last seven national titles. JANET VALDIVIA photo

Sione Lolohea has been on college recruiters’ radars for a long time.

He made news when he was offered a football scholarship from Brigham Young University as an 8th-grader at Maui Waena Intermediate School. But even through a standout career on the gridiron at Maui High School, rugby was always his first love.

He cemented that passion when he accepted a rugby scholarship to Life University in Marietta, Ga., earlier this month. The Eagles have won four of the last seven Division 1-A national titles, although the 2020 national tournament was canceled due to the coronavirus pandemic.

“They had a good program for me and I just felt like the man above told me to go to Life,” said Lolohea, a 6-foot-6, 270-pounder who has represented the United States several times in international tournaments. “And then hopefully after Life I can go overseas.”

Lolohea said that his decision came down to a professional contract with French club Brive or Life. 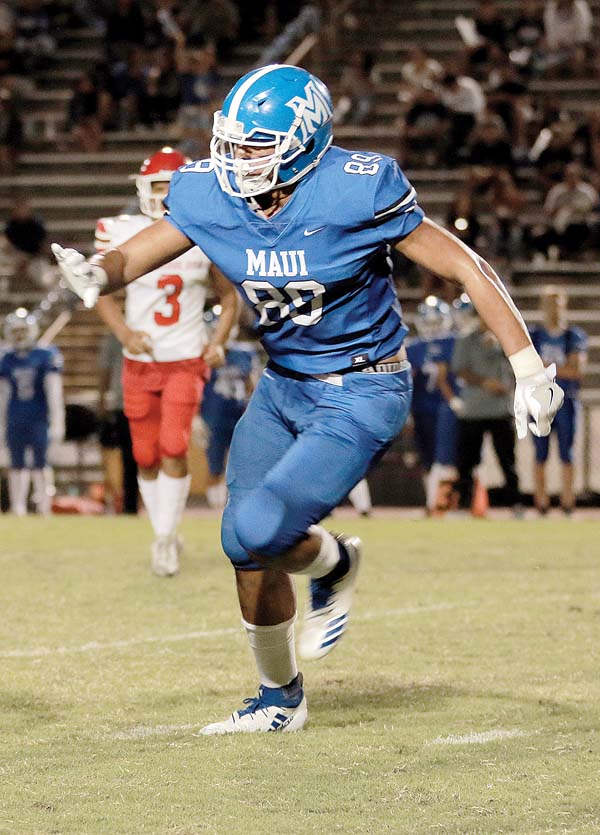 Life head coach Colton Cariaga was recently named head coach for the U.S. national under-23 sevens, which is the format that is played in the Olympics.

“When I went on a visit up to Life they just gave me a lot of hospitality, treated me like it was my home over there,” Lolohea said. “I just really enjoyed the camp out there and felt at home at Life.”

As a senior, Lolohea was the only first-team Maui Interscholastic League football All-Star for the Sabers, who finished 1-8. He played on two state tournament teams as a Saber.

He said he may study to be a chiropractor at Life, but he has international and professional rugby in mind as well.

“I noticed that I had more passion for rugby than football,” he said. “I will miss football, it’s been a good run at Maui High for these last four years.”

Baldwin graduates Kayla Pemasa and Kiyana Pemasa each just finished their freshman years at Life on the women’s rugby team.

Having familiar faces from the Kahului Maui Rugby Warriors club is a welcome theme for Lolohea, who is just the most recent in a long list of standouts from the Valley Isle to garner a rugby scholarship.

“I’m just trying to go further with it,” Lolohea said. “Playing in the U.S. is OK, but after my years in college I’m going to try to go overseas and just travel around the world.”