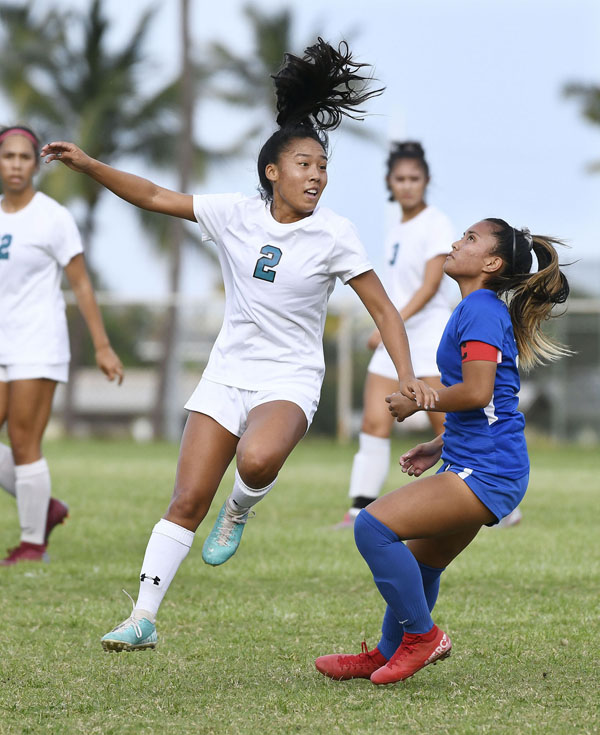 King Kekaulike High School’s Teani Arakawa (2) was named Hawaii State Player of the Year by Gatorade on Wednesday. She returns for her senior year in the fall. The Maui News / MATTHEW THAYER photo

Teani Arakawa, a rising senior at King Kekaulike High School, was named the 2019-20 Gatorade Hawaii Girls Soccer Player of the Year on Wednesday.

Arakawa is the first Gatorade Hawaii Girls Soccer Player of the Year to be chosen from King Kekaulike and the school’s second Gatorade state winner in any sport, joining Bailey Massenburg (cross country 2008-09).

The award recognizes outstanding athletic excellence, high standards of academic achievement and exemplary character demonstrated on and off the field.

“Teani Arakawa is a very skilled player with a great understanding of the game,” said Sky Delaney, head coach at Lahainaluna High School. “She is fearless and tenacious. She’ll battle for every ball and make the right decision in compressed areas, with two or three players pressuring her. Any team would be very lucky to have her.”

Arakawa is now a finalist for the Gatorade National Girls Soccer Player of the Year award to be announced later this month.

The 5-foot-1 midfielder scored 18 goals and passed for 13 assists this past season, leading the Na Alii (11-1-1) to the Division 1 state championship game, which ended in a 1-0 loss to Kamehameha Kapalama.

Arakawa has volunteered locally on behalf of stadium cleanup and beautification efforts as well as the Makawao Elementary School and Waipoli Hydroponic Greens farm. She has also maintained a 3.94 GPA in the classroom.