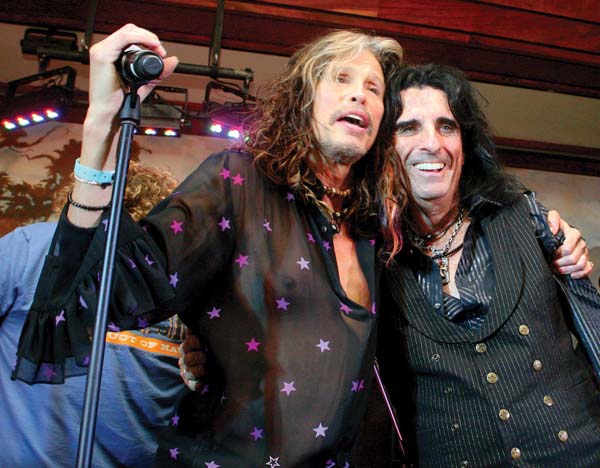 It’s become an annual rite at the close of the year for a number of our famous full-time and part-time residents to rock out in Wailea at a fundraiser for the Maui Food Bank and the Maui Arts & Cultural Center.

Besides performing some of the stars’ best-known songs, the celebrated ensemble often features some choice covers, which last year included Aerosmith’s lead vocalist and Rock joyfully singing the Stones’ “Happy,” and Cooper and the collective ensemble blazing through the Beatles’ “Revolution.”

Saturday’s party marks an important milestone, as the total money raised by these annual events for the Maui Food Bank so far equals close to 1 million meals served.

“We’ve been doing this since 2008 with mostly resident Maui musicians, and we’ve done 994,000 meals,” says event host Shep Gordon. “So we’ll crack 1 million meals this year, and we’re doing it in a bigger room so we can raise more money for the food bank.” 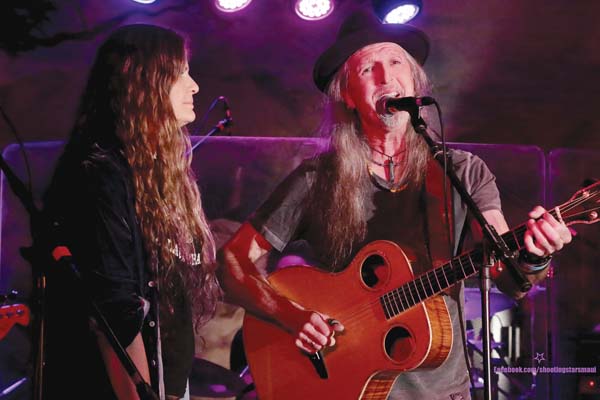 Annually drawing a diverse array of talent, every event is unique.

“It’s developed into a show,” says Cooper. “I bring my band so that people like Steven Tyler can do two or three songs, and Dave Mason is going to be there this year and we’ve known Dave for a long time. We’ve all done charity shows and this one is so much fun because it’s very loose. One year we had John Mayall, James Hetfield from Metallica, a Doobie Brother . . . It’s something you’re never going to see again. Another year Steven Tyler and myself and Weird Al did (the Beatles’) ‘Come Together.’ It used to be I would only do Alice Cooper songs, but now I look forward to doing a Rolling Stones’ or Who song. It’s a lot fun.”

Gratified to be part of this year’s milestone event, Cooper says, “When people think about Maui, they don’t think there would be a problem, but it’s like anywhere else, there are people in need. This is a night when you can really get something done.”

The veteran rocker is currently working on a new Cooper band album.

“When my vacation is over I go back to L.A. to Johnny Depp’s house,” he says. “We’re working at Johnny’s house and we’ve written 30 songs already for this album. Now we’ll weed out the best 10 or 12 songs.”

For McDonald, playing the Wailea shows has inspired him to collaborate lately with some younger, rising musicians like soul singer Brian Owens and acclaimed hip-hop jazz bassist Thundercat.

“I’ve spent so many years playing relatively the same music whether with the Doobies or as a solo artist, it’s almost a necessity to stay conscious by veering off into more diverse performances,” he explains. “The gigs on New Year’s Eve for Shep have really been the catalyst for me. It made me realize there’s a whole world out there of guys I’ve known for years, but haven’t had a chance to play with and new people. It lit a fire under me, and it seems to have transferred into my own career, doing things that are outside of my own little world.”

McDonald will next be heard duetting with Owens on the song “For You,” from the forthcoming album “Soul of Ferguson.”

“Brian is a really talented young artist from Ferguson, Missouri, which is where I grew up. He opened for us in St. Louis with his band the Deacons of Soul. They do a killer Sam Cooke medley. It’s like an old-school, R&B, gospel thing, but it’s really fresh. If the world knew about him they would come knocking at his door.”

As far as Thundercat, “He’s a phenomenal musician bass player, part of the avant-garde hip-hop that’s taken hold in the U.S.,”

McDonald notes. “His roots are steeped in jazz bassists like Jaco Pastorius and Stanley Clarke. We wrote a song together with Kenny Loggins, and I played with him at the Hollywood Bowl. He’s just a lethal bass player, it’s almost hard to imagine. The album he just did, in a way it reminds me of a hip-hop Pink Floyd album.

“I’ve had a lot of fun this year playing all kinds of crazy things, playing more with other musicians. I just did a gig with Warren Haynes, touring with the 40th anniversary ‘Last Waltz’ (tribute to The Band). I’ve been out of my element a little bit and enjoying it.”

For New Year’s, McDonald is wondering about playing “a couple of old blues things by Little Milton and Buddy Guy.”

“I’m so happy to be a part of it,” says Doobie Brothers’ guitarist/lead singer Pat Simmons, adding that there’s talk of doing something with Mason from his Traffic or solo days.

The Doobies and Mason toured together this summer, with Simmons jamming on favorites like “Feelin’ Alright,” “Dear Mr. Fantasy” and “All Along the Watchtower.”

“I suggested to Shep that he get Dave over,” Simmons explains. “Dave said he would love to do it.”

Most recently, Simmons has served as a proud dad producing son Pat Simmons Jr.’s debut recording, “This Mountain,” which just got released.

The Doobies are currently working on some new material for a prospective new studio album.

“We’ll hopefully record something over the winter,” Simmons says.

In April, the band will tour Australia with Santana.

Recently honored with a United Nations Humanitarian Award, Tyler will head out next year on what’s being described as Aerosmith’s “Aero-Verdeci” farewell tour, while Mason will head out in January on a leg of his “Alone Together Again” tour.

Hip-hop blues artist G. Love returns to Maui for two shows, playing an acoustic set at Charley’s Restaurant & Saloon in Paia on Friday and at Fleetwood’s on Front St. in Lahaina on Saturday.

• Doors open at 8 p.m. for the rooftop and 9 p.m. for main stage. Tickets are $150 for main-floor access, $500 for the rooftop and $1,250 for access to both levels. For more information, visit www.fleetwoodsonfrontst.com. Advance tickets for the Charley’s show are $35, and $40 at the door. Show time is at 10 p.m. For more information, visit www.charleysmaui.com.

“It’s called the Hawaiian Room because of my grandmother,” Hanaiali’i explains. “She was one of the original Royal Hawaiian hula dancers, and she was asked to go to New York and open the Hawaiian Room there. All of the great entertainers of Hawaiian music came through that room. So at the Grand Wailea we’re bringing back a lot of memorabilia, and as part of the show we go back in time and do a reenactment of that room.”

Along with the nostalgic Hawaiian tribute, the show’s repertoire ranges from funky Tina Turner to Justin Bieber’s contemporary pop. Grammy-nominated musician Michael Ruff is on board as the show’s music arranger. Having previously served as musical director and keyboardist for Rickie Lee Jones, Chaka Khan and David Sanborn, Ruff has seen his songs recorded by Bonnie Raitt, Kenny Loggins and Natalie Cole.

The new venue is based in the room that once housed the Tsunami disco, and to enhance the experience, fragrance is piped in and four screens are employed with state-of-the-art video mapping.

After the New Year’s kick-off, the show will only be available for private events until the target month of March, when it is expected to formally open with two shows a night on Fridays and Saturdays.

“We’ve completely transformed the inside (of the room) and we have a stage in the center,” Hanaiali’i continues. “It’s really exciting.’ “

• The Hawaiian Room New Year’s Eve party runs from 7:30 p.m. to 1:30 a.m. at the Grand Wailea. Tickets are $300 for VIP seating and $250 for general seating. VIP seating includes a meet-and-greet with Amy Hanaiali’i, a photo session and an autographed CD.

It will be a historic night for Deadheads when Phil Lesh & Friends perform at the Maui Arts & Cultural Center’s Castle Theater tonight at 7:30.

The legendary bassist for the Grateful Dead, Lesh began playing with a rotating ensemble of musician friends in 1998, a few years after the death of the band’s iconic lead guitarist/singer, Jerry Garcia. The show is sold out.

• The New Year’s Eve party at the Wailea Beach Resort – Marriott, Maui will begin at 7 p.m., with music at 8:30 p.m., Saturday. The event will include fireworks, cocktails and pupus. Price is $600 plus tax and 12 percent tip, with a portion of proceeds benefiting Maui Food Bank and Maui Arts & Cultural Center. For tickets, email nyemala2013@gmail.com.