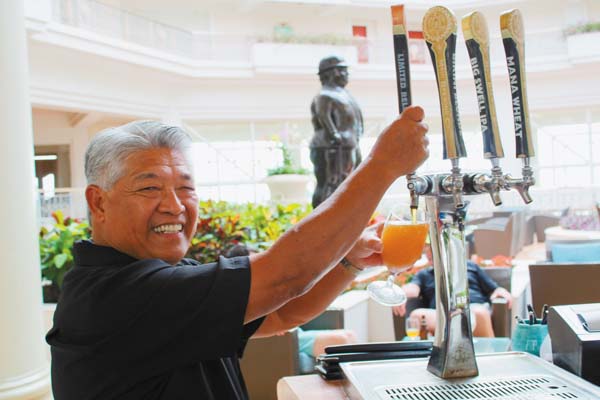 Longtime Botero Lounge bartender Mich Domingo pours a Grand Wailea Gose (pronounced “goh-suh”) at the resort. It evokes a taste of the islands, and is one of Grand Wailea’s most requested beverages. The Maui News / CARLA TRACY photo

Want to quench your thirst with a cold and frothy brew that is poured nowhere else on the planet?

Then go to Grand Wailea, The Ritz-Carlton, Kapalua and Fairmont Kea Lani, resorts that have partnered with top Maui breweries to craft signature brews targeted for suds lovers just like you.

“We’re excited to partner with local Kohola Brewery to create our own custom brew,” says Michael Gaal, the food and beverage manager of The Ritz-Carlton, Kapalua.

“Our goal was to create a beer that fully embodies the surrounding Kapalua area and that unexplainable feeling of relaxation you get while at our resort, and Shorebreak Session Ale does exactly that.”

What a great name, and it’s an ideal afternoon refreshment after, say, a day on the water, during a Hawaiian sunset or with gourmet pupu at one of the Ritz outlets. 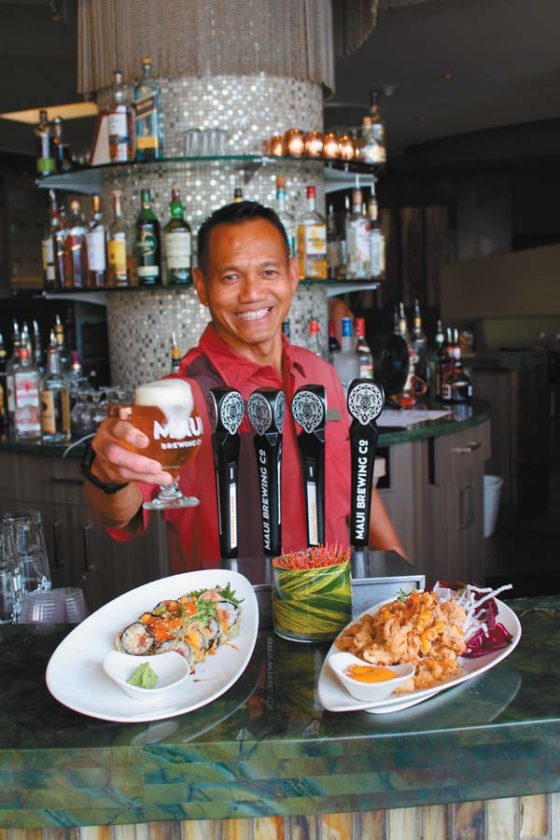 Shorebreak Session Ale is light bodied and offers a sense of place in this unique corner of the world.

Shorebreak embodies liquid tropics with exotic ingredients, such as infused fresh pineapple juice and Calamansi lime peel. Partnering with Lahaina-based Kohola Brewery, known for its excellent craft beers, the ale is causing a buzz of excitement with all of those who have tried it so far.

It blends a variety of hops such as Cascade, Mandarina Bavaria, Citra and Magnun to achieve its optimal citric taste. The combination of these hops offers elements of ruby red grapefruit, peach, passionfruit, guava, lychee, and of course, pineapple.

Shorebreak is now being poured throughout the resort’s five food and beverage outlets including The Banyan Tree, Kai Sushi, Alaloa Lounge, The Pool Bar & Cafe and The Burger Shack.

While the Ritz’s beer is now a permanent addition to the beverage outlets, Fairmont Kea Lani in Wailea just debuted a beer that will only be poured until it runs out.

Cristom Barrel Select is a match made in heaven with Cristom Vineyards located in Willamette Valley in Oregon pulling pinot noir barrels for the cause and Maui Brewing Co. aging and conditioning the special Fairmont Kea Lani beer in the wine vessels.

“This beer is basically the result of red wine and Belgian ale that had a baby,” aptly puts lead brewer Clay Jenkins about the delightful beer.

Fairmont’s Cristom Barrel Select is a saison, French for “season.”

Historically, saison began as a pale ale brewed in the cool winter months in farmhouses in a French-speaking region of Belgium, and was stored for drinking in the summer. It was meant for farm workers who were allowed up to five liters each workday.

According to the brewer’s notes, Fairmont’s version has a “light bodied and effervescent mouth feel with crisp dryness” and its color is “straw yellow with a slight haze.”

Cristom Barrel Select is “a subtle mix of banana and clove with hints of plum and ripe red berries” and it finishes with a “pleasant malty sweet flavor and a mixed berry stone fruit kick.”

“It’s one of a kind, available nowhere else on the planet,” explains Ko General Manager Chris Hong.

Grand Wailea, A Waldorf Astoria Resort debuted its namesake custom craft beer for its 25th anniversary last year and it quickly catapulted to the top of the resort’s beverage popularity charts.

The resort partnered with Maui Brewing Co. to create the Grand Wailea Gose (goh-suh) available on tap in four lounges and restaurants.

“We chose the gose-style, because we like the dominant flavors of tartness with herbal characteristics and saltiness,” says Shane Komine, director of Restaurants & Bars at Grand Wailea. “It pairs well with seafood here in Hawaii, and is refreshing at the pool and beach. We are using li hing mui as the sour flavor, and it’s perfect for the gose.”

“Li hing is a local flavor, and it’s our favorite crack seed from small kid times. We even took it to college with us to flavor our beer with it. It’s in our local DNA, so it’s befitting to now feature it in our Grand Wailea Gose.”

But the li hing mui powder is not like the traditional ones laced with aspartame. The gose is created with li hing from Ono Pops of Hawaii, which makes a natural powder by blending white licorice and pharmaceutical-grade pure ume (Japanese sour plum) for its own all-natural mix.

The result is a salty-sweet taste with a pucker, toned by a wee touch of honey that comes from bees in Kula on the slopes of Haleakala raised by Mike McCoy of Aina Lani Farms. Molokai sea salt is also used to perfect the local brew.

“I’m stoked that we landed on a gose-style as it helps to push the limits of the average drinker and educate about what craft beer is and can be. The team has wanted to work with li hing mui for a long time, this just fit perfectly.” says Garrett Marrero, the founder of Maui Brewing Co.

Gose has a uniquely tangy and slightly salty flavor. On top of barley, the beer is brewed with a large percentage of malted wheat that provides tartness and smoothness. Then it’s fermented with wild yeast and lactobacillus (the bacteria that sours yogurt, kim chee and sourdough,) and is then spiced with coriander.

“The gose-style is making a big comeback as a niche beer among craft brewers. The style embodies terroir, much like wine in that the environment in which it is produced imparts certain taste characteristics into flavoring it,” Marrero adds.

* Carla Tracy can be reached at carlatracy@mauinews.com.