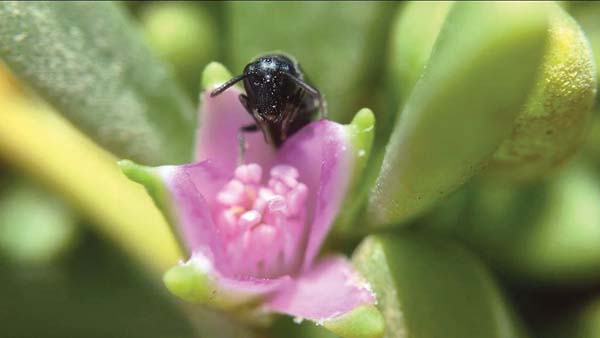 Female bees lack the yellow faces that lead to the common name of the yellow-faced bees. Once common, many of these bees are now on the endangered species list. SHELDON PLENTOVICH photo

Somewhere between 400,000 and 700,000 thousand years ago — about the time Haleakala was forming — a tiny bee arrived in the Hawaiian Islands.

This bee was about the size of a grain of rice and prepared for a life of self-sufficiency. Though we think of bees as living together, working together and providing honey, approximately 75 percent of the bee species in the world lead a solitary life. Simply pollinating flowers — an essential ecosystem service — they are often overlooked by people.

Little is known about the first bee to reach Hawaii, but in a remarkably short amount of time her descendants evolved into 63 unique species found only in Hawaii. They were successful, living from the coastline to the mountaintop, pollinating everything from naupaka to silverswords. They were so common in 1913 that entomologist R.C.L. Perkins called them “almost the most ubiquitous of any Hawaiian insects.”

The last hundred years have brought dramatic changes to Hawaii, and seven species of Hawaiian yellow-faced bees have since landed on the federal endangered species list. According to Dr. Jason Graham, a University of Hawaii at Manoa researcher, the other Hawaiian bees may not fare much better. “There is the potential that others are endangered or extinct,” he says. “There hasn’t been much work on them.” Habitat loss and invasive species are the unique bees’ primary threats.

With few exceptions, Hawaiian bees rely on native plants for food. They are not found in areas dominated by non-native plants. The decline in food sources has led to a decline in population. Introduced bees and wasps compete with the native bees for food and nesting sites. Exotic ants also take a toll. 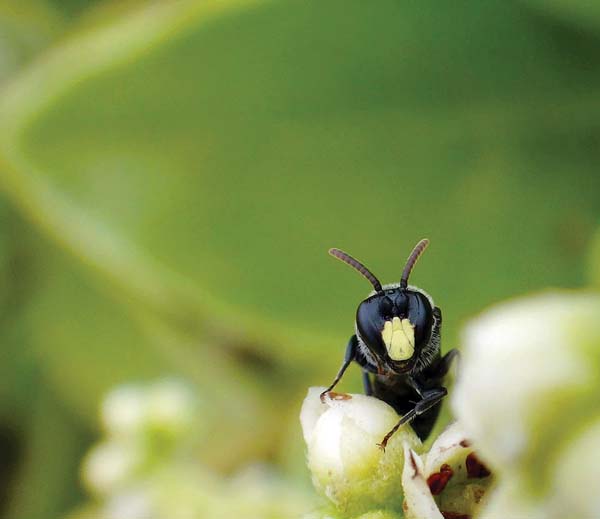 Yellow-faced bees don’t sting, which often leads to the death of a bee. “If a honeybee worker dies, the hive continues,” explains Graham. But a solitary bee isn’t expendable — she won’t pass along her genetic material. “She’s the single mom of the insect world,” says Graham.

It’s up to her to find a nest, typically a hollow stem or hole in a rock or coral. She builds a little apartment for each egg, stocking the cupboards with pollen, food for when the larvae emerge. She seals the opening with a waterproof coating to protect her young from the elements and off she goes — her caregiving role complete.

But the neighborhood has changed in 200 years; now her unattended young are vulnerable to multitudes of invasive ants that easily pierce the cellophane-like barrier to the nest. Years of evolution in isolation have left the yellow-faced bees defenseless and vulnerable to non-native predatory ants that crawl inside the nest and devour the young.

Some Hawaiian bees, such as the highly endangered Hylaeus anthracinus, are limited to small populations along the coastline. “Climate change and rising sea levels are a definite threat to the future survival of this species,” says Graham, who is investigating artificial nesting sites for the bees. Since yellow-faced bees rely on existing holes for nests, Graham drills into blocks of wood and lines them with plastic tubing so he can pull the nest out and monitor success. He can use an insect barrier to keep ants out.

Understanding Hawaiian bee biology is essential to protecting them. You can help:

• Use native plants in your landscaping.

• Bring your own kindling. For some of the most endangered coastal species, nest sites can be destroyed when people collect wood for bonfires. What looks like a dried naupaka twig may actually contain a tiny bee’s nest.

• Entomologists are in the beginning stages of research but they will eventually need assistance — if you want to help monitor nests and find native bees, follow the Hawaiian Yellow-Faced Bees page on Facebook and check the discoverbees.com website.

It was certainly a spring semester and graduation like no other. We hope many of you were able to join our ... 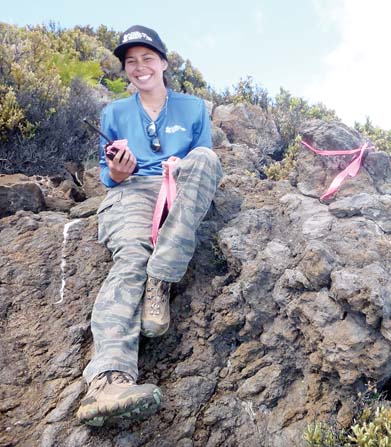 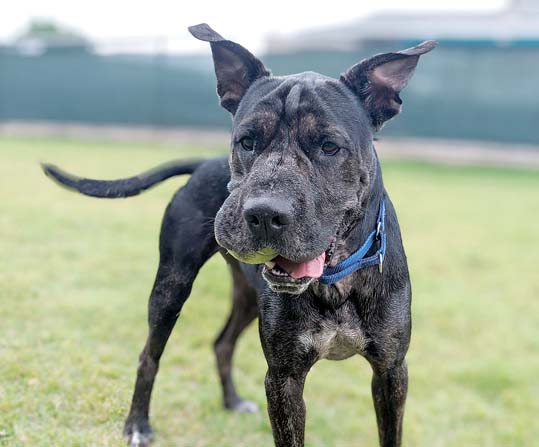 Over 400 gather to March for Change

Man gets 25 years for Molokai shooting

27 new cases, including 1 on Maui, reported