Candidates face off against each other — and the mayor — at forum 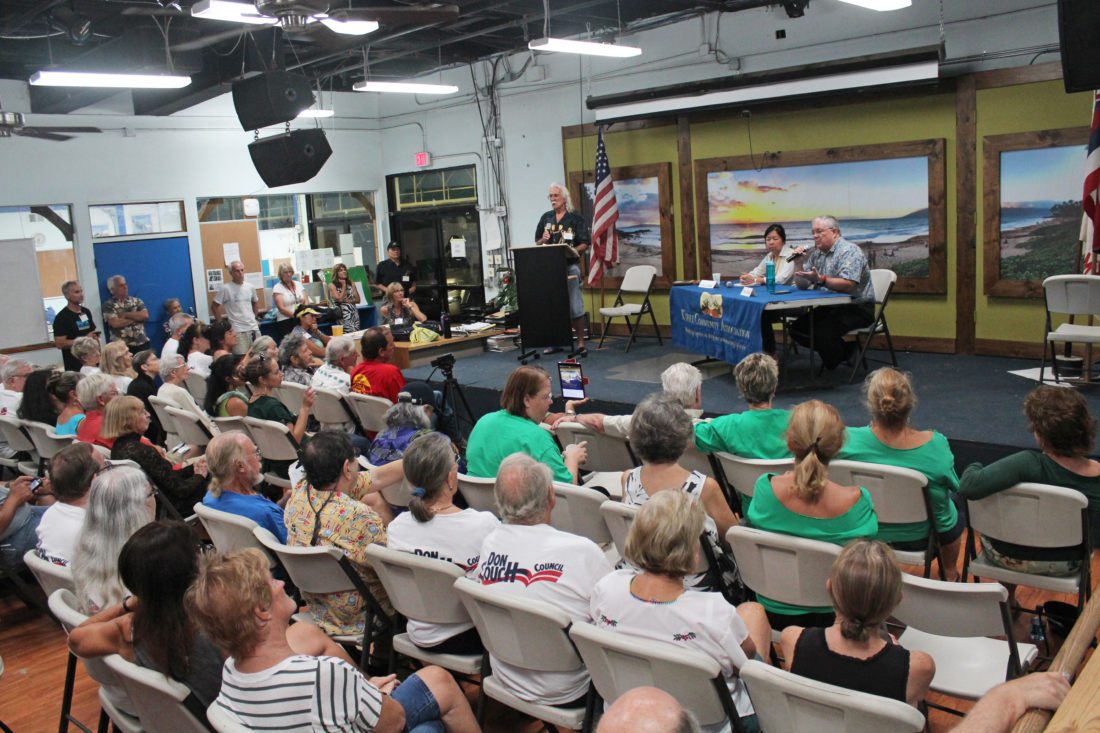 KIHEI — Maui County Council candidates were critical of Mayor Alan Arakawa’s decision to suspend the community planning process, and said there were other ways to find solutions instead of halting it altogether.

Candidates in the South Maui, Upcountry and Wailuku-Waihee-Waikapu races weighed in on community plans, development, a county manager system and other issues during a Kihei Community Association forum Tuesday night. The three races were chosen based on votes from the community, association President Mike Moran said.

Candidates said they were surprised by Arakawa’s decision, reported Sunday in The Maui News. In an Aug. 12 letter, Arakawa directed the county Department of Planning to suspend work on the plans and instead focus on improving the process.

“I think it’s ridiculous,” said Kelly King, who is challenging incumbent Don Couch in the South Maui race. “I don’t even know if it’s legal. . . . You don’t make any progress by taking something that’s moving too slow and stopping it.”

When asked whether he thought the process was broken, Couch, who chairs the council’s Planning Committee, said, “I absolutely do.” However, he pointed out that it’s already written in the Maui County Charter that the plan update process must take two years — six months of review with community plan advisory committees, six months with the Planning Department and a year with the Planning Commission before it comes to the council. 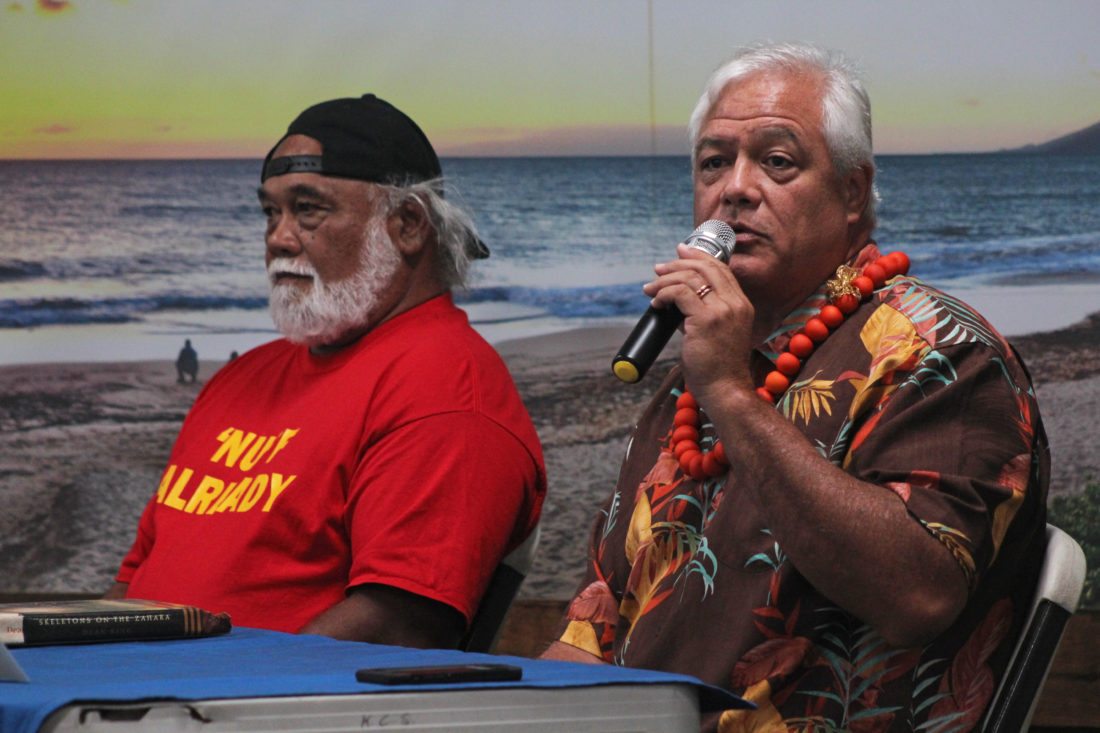 Dain Kane (right) and Alika Atay, who are seeking the Wailuku-Waihee-Waikapu council residency seat, introduce themselves before the start of their panel. The Maui News / COLLEEN UECHI photo

For some candidates, the problem was not with the process.

“I think the implementation is broken,” said Alika Atay, who is running against Dain Kane for the Wailuku-Waihee-Waikapu seat. “If the community went through the process and spent all those hours  . . . now it’s up to the administration and the government to implement what the community has expressed. . . . I think it’s broken somewhere, but I don’t think the planning and the involvement of the community is (the problem).”

Kane agreed and said “things can be done to do a better job at the administrative level.”

Candidates did not have immediate solutions to the community plan dilemma, but many agreed that the community plans were vital as the basis for smart development on Maui. They said that good development rested on improving infrastructure first, and taking a closer look at projects that might affect the shoreline, such as injection wells, which Couch said the county is working to find alternatives for “now that we know better.”

“It’s the responsibility of decision-makers to decide things that really affect all levels of land and not damage reefs,” said Yuki Lei Sugimura, who’s running against Napua Greig-Nakasone for the Upcountry seat. 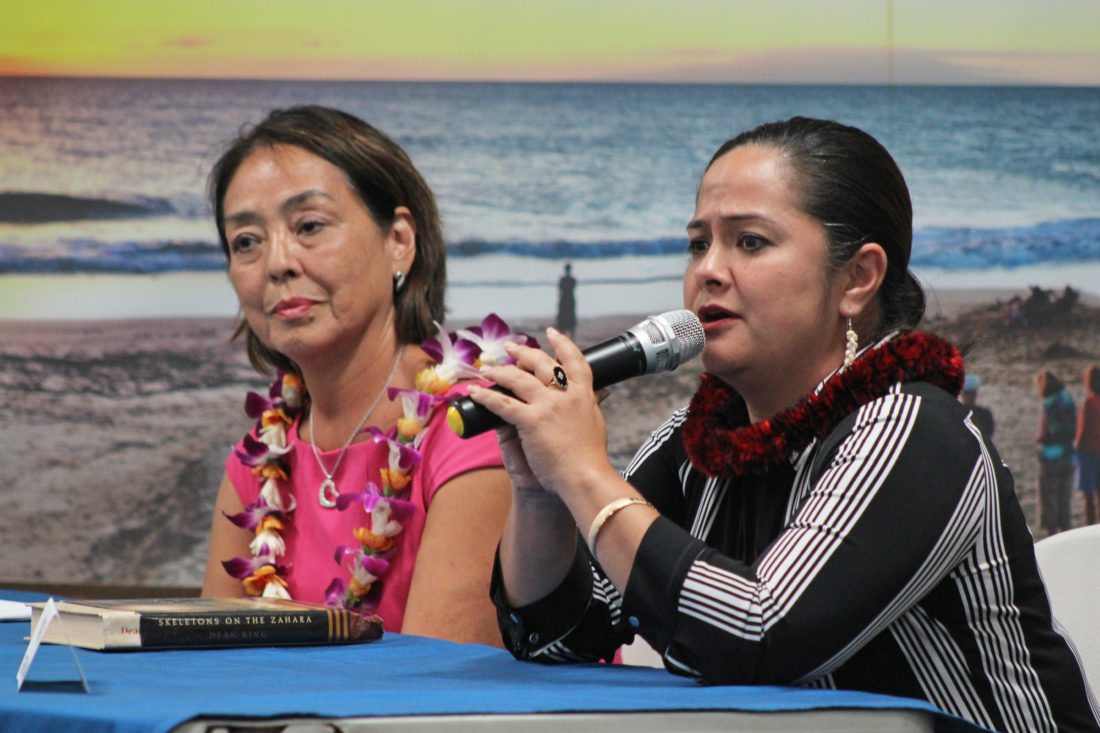 Some of the candidates faced questions about their experience. Each of the three races pits a newcomer against a veteran of county government — Couch, the three-term incumbent; Kane, the former four-term council member; and Sugimura, who’s worked for former Mayor James “Kimo” Apana and two former council members.

However, their opponents didn’t see this as a disadvantage. Atay, a farmer with several different organizations, said his work with nonprofits has given him experience working with the county system. King, vice president of Pacific Biodiesel, and Greig-Nakasone, a business owner and educator, added that they had “no obligations” or favors to repay.

“I don’t have those old alliances to sway my votes one way or the other,” Greig-Nakasone said.

When asked how they would limit this type of cronyism in government, candidates pointed to a charter amendment on the ballot as a possible solution. The amendment would allow the council to approve all department heads and set minimum qualifications for each job. Right now, most Cabinet appointments are left up to the mayor.

“That (amendment) will eliminate a lot of the cronyism because cronyism only happens in appointed positions,” Couch said. “Civil service is very good at weeding out cronyism.”

Candidates were split on the county manager issue, which a special committee spent six months studying and eventually supported by a slim margin. The committee produced a charter amendment to make the switch but the council, including Couch, decided it was not ready for the ballot. Sugimura, Greig-Nakasone, Kane and Couch still had questions and thought a solution to the underlying problem of government accountability could be solved through other changes. King fully supported it, as did Atay during the primary election — both believe the county would benefit from being run like businesses, which have similar models.

The full candidate forum will be posted on Akaku Maui Community Media at akaku.org.

Dain Kane (right) and Alika Atay, who are seeking the Wailuku-Waihee-Waikapu council residency seat, introduce themselves before the start of their panel. The Maui News / COLLEEN UECHI photo

Ryan Kirkham stands with his son Jonah, 13, on Tuesday. Ryan Kirkham, principal of Maui Preparatory Academy, will be competing in the Xterra World Championship triathlon on Sunday in Kapalua. The Maui News / ROBERT COLLIAS photo

The Molokai ferry departs Lahaina Small Boat Harbor for Kaunakakai Harbor in this photo taken in April 2015. The state Public Utilities Commission has allowed the ferry to cease service, and its last run will be Oct. 28. The Maui News / MATTHEW THAYER photo