Record flood was a close call for parts of Wailuku 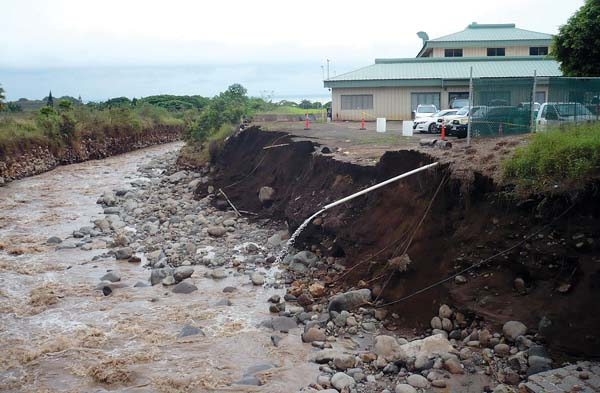 After photo of a river bank near Imi Kala Bridge and behind Maui Disposal show the damage Wailuku River flooding caused last month. A large portion of the company’s parking lot collapsed in the flood that left trucks hanging over the edge. Maui County Department of Public Works photo

That was all that was left of a levee protecting Wailuku residents and businesses right outside Kawaikini Place from the raging floodwaters of Wailuku River last month, county officials said.

“We were minutes away from this levee breaching, and everything you see blue would’ve been underwater,” Department of Public Works civil engineer John Smith said, pointing to color-coded maps indicating flood inundation areas in a conference room Friday. “If that would’ve blown, it would’ve literally gone straight through Iao Parkside. I mean, I lost sleep over that after we figured it out. It was really, really bad.”

While much of the attention following Sept. 13’s torrent has focused on the tremendous damage to Iao Valley residents and parks, two other areas required immediate repairs as well. The Army Corps of Engineers and county engineers identified the levee and an embankment behind Maui Disposal as the two most critical areas as far as public safety.

“We want people to understand that this is much more than just an Iao Valley flood,” county spokesman Rod Antone said. “Yes, the residents who were affected the most live in the valley, but the fact of the matter is that this literally could’ve affected everyone in Iao Parkside, Happy Valley; your favorite watering holes on Lower Main would’ve been gone. The whole Wailuku Industrial area would’ve been underwater. 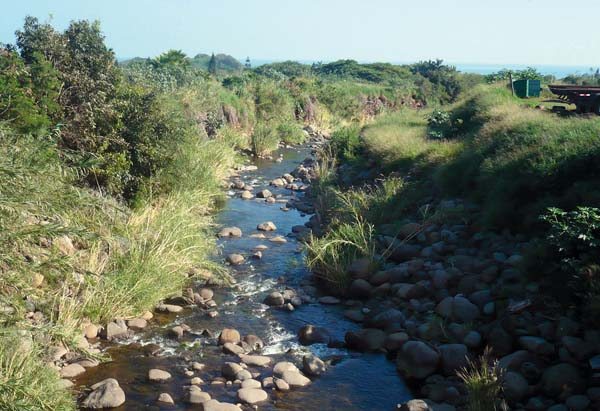 “People don’t realize how close we were.”

About 200 to 300 feet of stream bank eroded from the levee, including existing concrete riprap, Smith said. He believes that a piece of a bridge from upstream dug into the levee and caused the breach.

“That huge torrent of water started ripping this out,” he said pointing to a photo of the levee. “Everything from the Millyard down below would’ve been underwater. There would’ve been loss of life.”

“Sam Sato’s would’ve been underwater, how ’bout that?” Antone said.

Anywhere the river turned on its 2.5-mile path that ends in Kahului Bay, its banks were blown out, Smith said. Every portion of the Iao Stream Flood Control Project was negatively affected in one way or another. 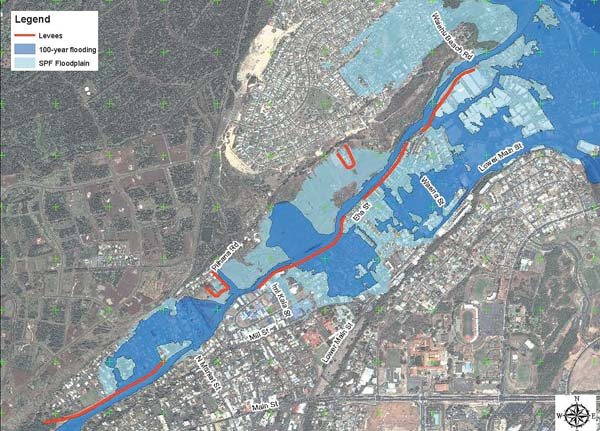 A Maui County Public Works map shows what could have happened with flooding in Wailuku and neighboring areas if levees along the Iao Stream Flood Control Project had broken. Red shows the location of the levees, and the two shades of blue represent areas that would have been inundated with floodwaters if the levees had been breached. Maui County Department of Public Works photo

Public Works Deputy Director Rowena Dagdag-Andaya said the county’s Engineering Division conducted site inspections of several facilities the day after the flood. The department got on a conference call with the Army Corps for guidance and planning, she said.

The Highways Division repaired the levee in about a week using concrete and large boulders that had washed down the river, Dagdag-Andaya said.

Serious damage to a bank near the Imi Kala Bridge collapsed a large portion of Maui Disposal’s parking lot. The company nearly lost some of its trucks — the vehicles’ back wheels were sitting on the edge of what was left of the lot.

“They had to bring in a tow truck to drive it out,” Smith said. “The guys wouldn’t drive them off of there, which I don’t blame them, because they were worried they were going to fall in.”

A contractor has been selected to repair the bank with large boulders to be placed about 500 feet from the bridge and along the side of the river. Officials planned to transport equipment to the site on Friday to begin the approximately $500,000 project. 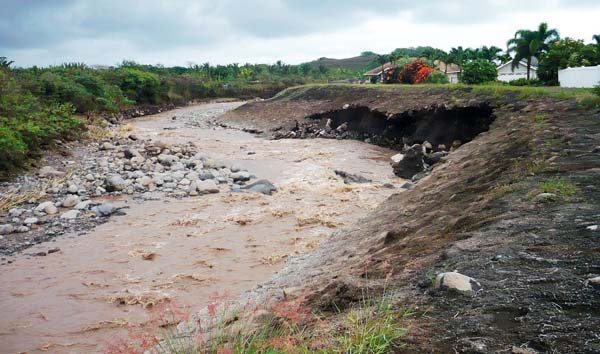 In addition to the repair work, county workers will need to transport rocks and boulders that have been relocated to debris basins back into the valley and along the riverbed. Rocks from the flood control project have been placed in a debris basin at the top of Kaawai Street in Happy Valley, which was filled to maximum capacity after the storm.

“That’s another big project,” Antone said. “All of that needs to come out.”

Work to haul out the material is still ongoing. The project is expected to cost around $500,000. The rocks and boulders will be used to shore up areas throughout the riverbed.

“This is a significant safety concern because there is zero capacity left,” Smith said. “If another storm happens, all of that dangerous debris ends up coming down and blowing out other sections. That’s the whole point of this thing, to stop that type of material from causing damage and ending up in the ocean.”

There is still an overwhelming amount of work to be done in the riverbed and above in Iao Valley, but county officials remained positive knowing that the flood control project did its job. Smith said many of the areas that were blown out in the flood will be improved with boulders placed in strategic locations. 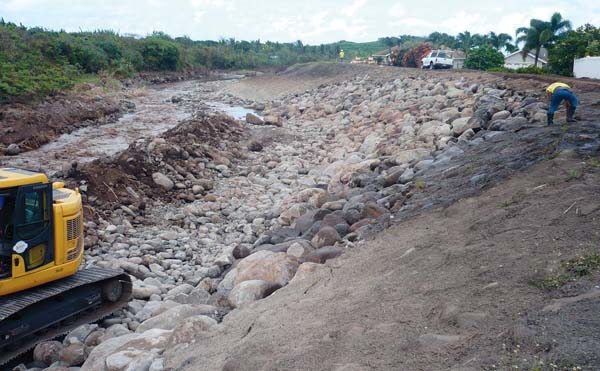 “Basically, we know where all the weak spots are from the top to the bottom, and we’re going in and reinforcing all of it,” he said. “After we’re done, it’ll be better than what it was before.” 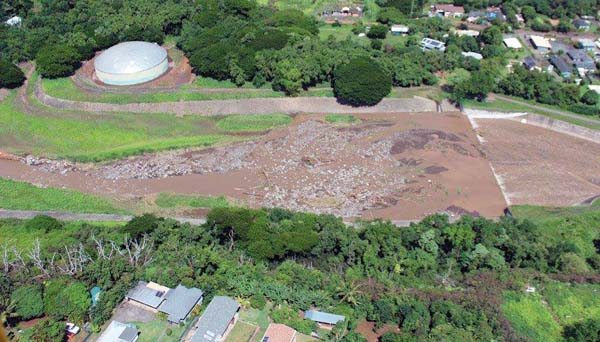 A debris basin at the top of Kaawai Street in Happy Valley is filled to maximum capacity after last month’s flood. Maui County Department of Public Works photo