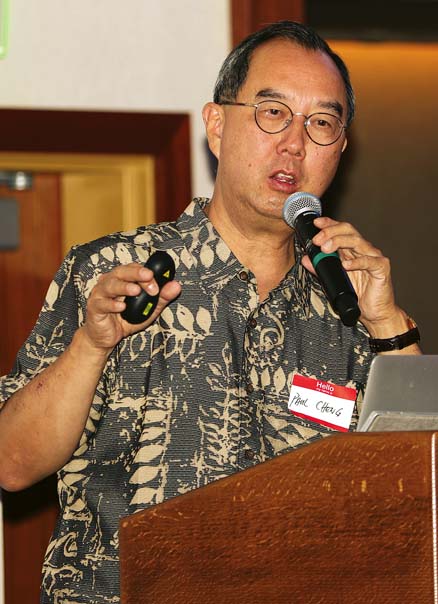 Paul Cheng, president and CEO of USA Infrastructure Investments LP, speaks to residents about the housing community that calls for 882 multifamily and single-family homes with at least half designated affordable. The Maui News / CHRIS SUGIDONO photo

KAANAPALI — The developer of the 304-acre Pulelehua working-class housing community in West Maui said Thursday that the project’s first phase will include the first apartment complex built on the west side in more than two decades.

The community that has been estimated to cost $300 million to $500 million to build is located below Kapalua Airport and is designed for 882 multifamily and single-family homes with at least half designated as affordable. In the works since 2004, plans originally called for the community to be primarily homes, but its first phase will begin with 250 long-term rental units.

Paul Cheng, president and CEO of USA Infrastructure Investments LP, appearing at an unveiling of the project at the Hyatt Regency Maui Resort & Spa, said he hopes to start construction by the end of 2017 or sooner. The Dallas-based company leads a partnership that purchased the property with all of its land entitlements from Maui Land & Pineapple Co. for $15 million in June.

“When I talked to the county they said, ‘Look, you can do for-sale affordable (housing), but we really prefer rental because the affordable housing quickly changes after seven to 10 years to market-rate housing,’ ” said Cheng to a crowd of more than 100 people. “It just benefits the first-time buyers or the lucky ones who get in the lotto. . . . So as far as the county’s concerned, the housing stock never goes up for the workforce and at the end of the day there’s nothing there again. That’s why there’s a perpetual shortage.

“By having rentals, they’ll be able to use it as a bridge to homeownership. They get in there, they get married, they save some money, and when they’re ready financially they can go buy an affordable unit for sale, which may be in the later phases for us.” 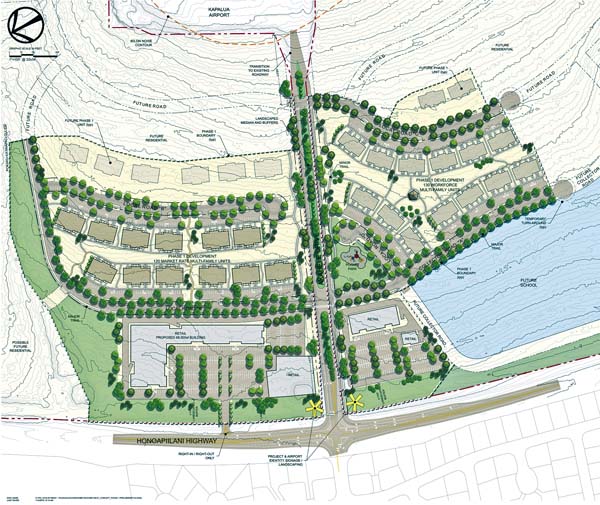 The first phase of the 304-acre Pulelehua working-class housing community in West Maui calls for 250 long-term rental units. They will not be vacation rentals or time-share units, the developer said. The project includes 130 workforce and 120 market-rate rental units straddling Akahele Street below the Kapalua Airport. Maui Oceanview LP photo

Current plans call for nearly a third more open space than original plans, along with plenty of trails, parks and guest parking, Cheng said. He said a grocery store, gas station, church, community center and other neighborhood stores also are being planned.

Cheng said he is working with the state to make it a “green development” fit with solar panels to “further lower the utility bills of residents.” Each building will have about eight to 10 units and be built in a low profile to preserve ocean views.

“It literally blends into the hillside,” he said.

The workforce rentals will be located near the planned elementary school with rates following federal Housing and Urban Development guidelines, which is required by the county housing department, Cheng said. He said a studio could go for as little as $1,000 a month, a one-bedroom unit for about $1,200 to $1,500 a month and two-bedroom units for around $2,000 a month.

Market-rate rentals will be a bit larger and have a luxury finish along with a private lanai in front. Cheng said the rentals are ideal for couples looking to retire on Maui and who can stay a year or two before buying a permanent home.

The units are not short-term vacation rentals or time shares, and leases would probably run about a year, he said.

The first phase is expected to cost about $75 million and take 18 months to completely build, but units could be available for rent within 14 months, Cheng said. He said the timeline for future phases will depend on the public and the market; they also will dictate whether future units will be homes or more rentals.

Cheng emphasized that his company is here for the long haul, unlike some developers who come and “build condos and sell it for $600,000, and they never look back.” His company also owns the 3.8-acre Maalaea Harbor Shops off Honoapiilani Highway, which it bought for $13.4 million in July 2015.

“We think that building housing on the west side would lower traffic on the highway because there would be less trips going back to Kahului or Wailuku,” he said of hotel and construction workers. “There’s a huge shortage. I think it’s increasing safety, and workers will be happy because they can be in the west side.”

Attendees of Thursday night’s presentation asked if the workforce housing would give preference to longtime residents. Some worried the people from the Mainland would snatch up units and jobs on the west side.

“You like help out the Maui people, you need to help the guys who work here in Kaanapali,” Junya Nakoa of Napilihau said.

Cheng said he has been trying to find a legal way to give preference to locals for the workforce rentals and that Kaanapali hotels have expressed interest in ensuring some of their workforce be added to the mix.

“Their workers are really suffering because they have to go so far every day,” he said of the hotels. “They want their workers to have close-by housing so that it’s easier on their lives, and they don’t lose two hours a day just going back and forth.”

Other concerns raised at the meeting included the impact of runoff from the construction, safety along Honoapiilani Highway and the airport, development of open space and increased traffic. Residents also questioned where the project would get its water.

Cheng replied that initially, the project would tap into the county water system, though he hopes to drill his own wells or collaborate with the county, which is currently exploring the drilling of two or three wells in the area.

For sewage, the plan is to build a treatment plant, he said. “We will not have injection wells,” Cheng emphasized. “We will use treated water for landscape purposes and recycle all the water.”

Sewage treatment plant injections wells are a touchy subject on the west side with the county being sued for use of those wells at the Lahaina wastewater treatment plant.

Cheng could not answer questions about the elementary school planned for the area. He told residents that they would have to ask the state Department of Education about the plans for the school. Residents have been complaining for decades about overcrowding at West Maui’s two public elementary schools, King Kamehameha III on Front Street and Princess Nahienaena off Lahainaluna Road.

Maui Land & Pineapple agreed to provide 13 acres for the elementary school and more than $2 million for facility improvements in the Lahainaluna public school complex. Plans for the third school were drafted in 2007, but it was not known whether they were finalized.

“We will be in contact with them to push them to get going, especially if the residents here want it,” Cheng said. “If I hear from you guys, sure why not. It’s good for us, it’s good for you.”

Cochran added that she wants affordable housing or rentals in perpetuity for the project.

“The word ‘affordable’ and ‘in perpetuity’ go hand-in-hand for me for anything being built, because we’re just going to keep chasing that ball again,” she said.

Cheng thanked the public for its input and attending the meeting and reiterated that it will be a “green project” and “for the people of Maui.”

“This is a major undertaking as you all know,” he said. “No one has even tried this for 20 years, and if they were, they would be all over the place. So we’re trying.”