Plea deal in the works for state Rep. Kaniela Ing 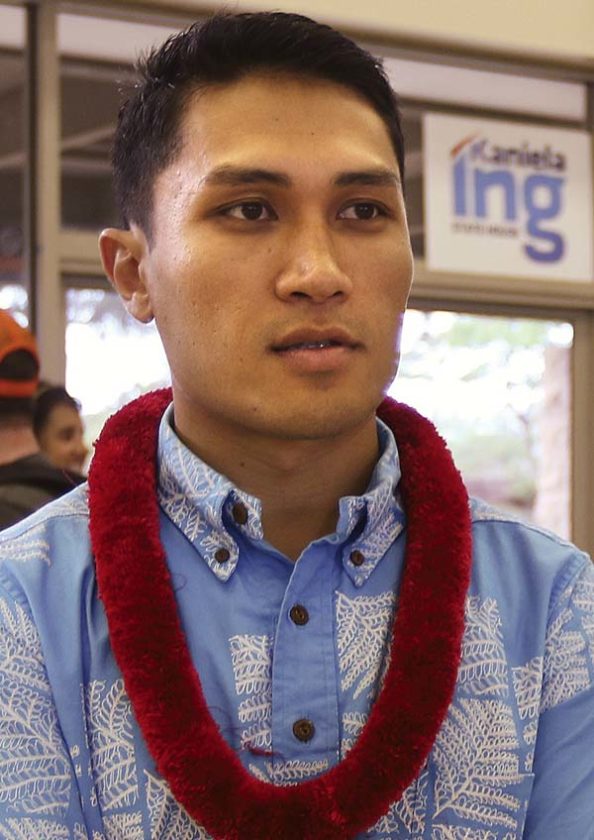 South Maui state Rep. Kaniela Ing is mulling a plea agreement on a charge that he drove his vehicle without insurance in January, as his case was continued Wednesday in Wailuku District Court.

Ing, 27, was on Oahu and not in court on Wednesday. His attorney, Ben Lowenthal, asked Judge Blaine Kobayashi to postpone the case to allow him time to discuss the details of the plea agreement offered by the prosecution with Ing. Details of the agreement were not released, but Deputy Prosecutor Terence Herndon said there was a time limit on the offer, which could be revoked.

Kobayashi rescheduled the case for Jan. 25 and noted that that would be the final continuance he would allow.

Ing, who was re-elected to his seat in November, has pleaded not guilty to the charge.

Prosecutors have argued that Ing “intentionally, knowingly and recklessly operated or used a motor vehicle on a public street” without car insurance on Jan. 18. The first-time traffic offense carries a minimum $500 fine and a three-month license suspension.

Ing has a driver’s license stopper in the case, which prevents him from renewing his license.

Ing’s citation originally drew headlines after he failed to appear for a Feb. 18 court hearing, and a bench warrant was issued for his arrest. Ing turned himself in at the Wailuku Police Station and was released after posting $250 bail.

He has said that he had temporarily canceled insurance for the car after it had been vandalized in January. He said he wasn’t driving but was sitting in the car, which was parked on the street, when a police officer pulled up and asked for his insurance card.

A source with knowledge of the citation, however, claimed Ing drove the vehicle onto South Kihei Road from Welakahao Road in Kihei when he was pulled over. The source said Ing also had an expired safety sticker and delinquent vehicle tax on the car, a blue BMW, but was not cited for those infractions.

Ing has said that he paid a fine but didn’t realize a court hearing had been set.

Separate from the no-insurance citation, court records show Ing’s car was ticketed for delinquent vehicle tax and no current safety check five times from Nov. 19, 2015, to May 19. Each ticket carries a fine of $140, according to the court records.