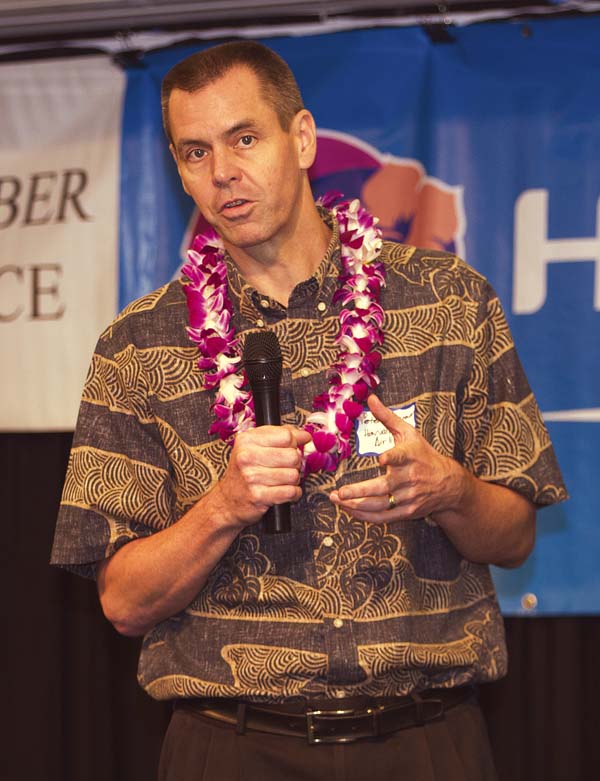 KAHULUI — Hawaiian Airlines is “very, very close” to returning service to the Kapalua Airport in West Maui, which will be outfitted with a Transportation Security Administration checkpoint, according to company and state Department of Transportation officials.

Maui Airports District Manager Marvin Moniz said Tuesday that the TSA checkpoint equipment will arrive by the end of this month. He said a contractor will be hired to install the equipment and that the state will build partition walls to secure the checkpoint.

“We’re working with the TSA in having the equipment running by February 20th,” Moniz said noting that Hawaiian can begin service the same day.

Peter Ingram, executive vice president and chief commercial officer of the company, said that he expects its commuter airline, ‘Ohana by Hawaiian, to start flying before the end of March. He announced the plans Tuesday during a Maui Chamber of Commerce luncheon at Maui Beach Hotel.

“We’ve got just about everything in place to restart service at Kapalua,” Ingram said.

The airline announced in November its plans to resume service to West Maui beginning Jan. 18. Four daily one-way flights between Kapalua and Honolulu on a 48-seat turboprop aircraft were planned.

Tickets were being sold online, but sales were halted when officials realized a TSA checkpoint would not be ready in time. Under the law, airports with planes carrying more than 19 seats must have a checkpoint.

“It was a bit of an oversight on our part in terms of communication and getting final notification back from the TSA that they were ready,” Ingram said.

Traveling to Kapalua is bit of a homecoming for the airline, which originally built and operated the airport from March 1987 to April 1993 before selling the airstrip and terminal to the state, Ingram said. The airport’s three-letter designation of JHM honors the late John H. Magoon, Hawaiian’s longtime former CEO and chairman.

“When I joined in 2005 and our finances were a little shakier than what they are today, I would remark to people from time to time that I think we may have sold the wrong business,” Ingram joked. “We should’ve kept the airport and sold the airline.

“It turned out, I’m glad we kept the airline.”

The 48-seater ATR 42-500, which travels to Oahu, Lanai and Molokai, will add West Maui to its destinations. The Kapalua Airport has the shortest runway of the group and the airline invested in a lighting system to help guide pilots in for a safe landing, Ingram said.

The Federal Aviation Administration has since tested and approved the system and pilots are in training, he said.

TSA has hired and is training workers at Kahului Airport before transferring them to Kapalua, Moniz said.

The last time the West Maui airport had a checkpoint was in 2013, when Island Air discontinued its service. The equipment remained in place for about two years in hopes of another airline, but was dismantled and shipped about a year ago to another city, Moniz said.

“The good thing is now we get newer equipment,” he said.

Moniz said the service will relieve congestion at Kahului Airport and on Honoapiilani Highway. He said Kahului airport faces gate challenges every day.

“It’s a good thing. It takes a little stress off Kahului and helps us increase operations over there,” he said of Kapalua. “We always get challenges with gate space, so having a few flights in Kapalua will increase some capacity too for planes here.”

Ingram said that Hawaiian is doing well and is benefitting from moderate fuel prices. He said North American markets are doing “particularly well,” but the most growth is coming from international destinations such as China and Korea.

“China is going to be a huge market and I think in the long term we should all be thinking about how we communicate with other parts of the world because they are bound to be an important economic superpower in the years ahead,” he said.

Ingram said Hawaiian’s growth on Maui has been slow due to the transition to its new fleet. He said its new line of A321neo planes will allow them to expand flights as they come into service at the end of the year.

“The fact that we’re not growing as fast in Maui this year is in no way a reflection of a enthusiasm for growth in Maui,” he said. “We’re keen to look for opportunities to grow our service in the future and the A321neo aircraft is going to be part of that growth plan.”

Ingram said Hawaiian is committed to providing a quality service at an affordable but competitive price. He said there are no plans for overhead baggage fees.

As for restoring a flight from Kahului to Las Vegas, he is hopeful that it will return aboard the A321neo planes. He said the route suffered from being less than daily and the airline struggled with matching the right number of seats with the market capacity.

Ingram recalled announcing the flight several years ago and its later discontinuance.

“I would like to bring that back to restore my slate,” he said.

• Coronavirus. A Japanese visitor who came to Hawaii and later tested positive for the coronavirus had symptoms ...

A high surf advisory for east-facing shores of Molokai and Maui is up until 6 p.m. Friday with wave heights of 6 to ...

WAILUKU — A man was arrested after he allegedly burglarized the Maui Humane Society last week and fled from ...

WAILUKU — A homeless man was arrested Monday morning after he wielded a knife while chasing a Kahului gas station ...

The Maui News A metals and electronics recycling event at the Hana Landfill is set for 8 a.m. to 2:30 p.m. ...

The Maui News WAILUKU — A 41-year-old Kihei man was arrested for allegedly threatening his cousin with a sword ...