The Pauwela Homes project includes three- and four-bedroom homes on 6,900- to 11,500-square-foot house lots. Each lot comes with a 5,000-square-foot farm plot for agricultural use in a condominium-style development. Photo courtesy Kauhikoa Land, LLC

A group of more than 200 Haiku residents has filed a lawsuit against the County of Maui and a proposed workforce housing development in Pauwela and is claiming that the project has circumvented public review and violated state and county agriculture laws, their attorney said last week.

“They’ve essentially tried to thread this project through several loopholes, and the community has concerns about the impact it will have on the roads and traffic and safety,” Na Hinano’s attorney Lance Collins said Friday.

Project Manager Dave Ward declined to speak directly about the lawsuit, but said he is confident that the project followed all county and state regulations. He added that he looks forward to “providing Maui’s working families with an opportunity for homeownership in Haiku.”

“There’s a need for housing islandwide, and you see that in the rents across the island,” Ward said Friday. “Thirty-three homes isn’t going to solve our housing shortage, but it is a step in the right direction.” 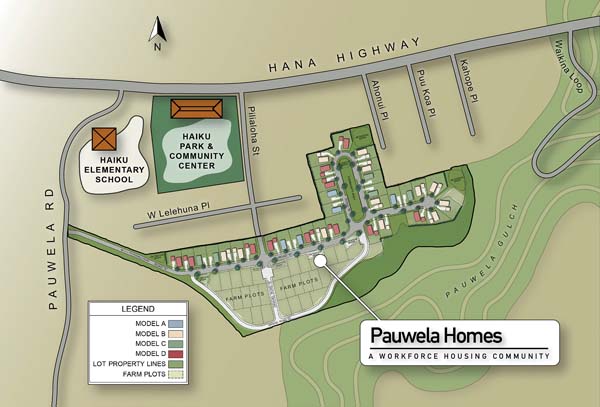 Kauhikoa Land has conducted an environmental site assessment of the land that was formerly used for growing pineapple, Ward said. He said soil sampling and testing uncovered no traces of two types of potentially hazardous chemicals used in pineapple production.

An archaeological inventory survey compiled last year documented seven historic sites, but none were in the area of the development, Ward said. He added that a recent traffic study found no significant impact.

“We believe that these new families that are moving into the neighborhood will have very similar concerns about traffic and speeding,” he said. “These homes are good for all types of folks, including young growing families.

“It’s a great starter home, but you could live there your entire life.”

The 19-acre housing project features three- and four-bedroom homes on 6,900- to 11,500-square-foot house lots. Each lot comes with a 5,000-square-foot farm plot for agricultural use.

Each house, lot and farm plot are sold together and conveyed under condominium laws, where residents own their units and a share of the common area, as opposed to a subdivision development.

The fee-simple homes are prioritized for income-qualified residents, who meet county workforce housing requirements, through a public lottery.

Ward said that the project is not “affordable” housing, but rather “workforce” housing. He said the company could have built market-priced housing with only eight workforce units, but felt it was “the right thing to do” to make the project 100 percent workforce housing.

“Depending on your down payment and other factors, you can get into these homes for what people are charging for rent, or less, and then you have all the benefits of homeownership,” he said. “I hear in the community there’s a need for all kinds of housing, and we’re providing housing for local residents in Maui County.”

Ward, who co-owns Kauhikoa Land with West Maui Land Co.’s Peter Martin, is seeking a grading permit and 33 building permits that he hopes to have completed in about a month. Construction is planned for May or June to accommodate the elementary school, which will be on summer break and is the most impacted by the work.

Infrastructure is expected to take about four months and homebuilding eight months to a year. The first homeowners could be moving in early next year.

“We are really squeezed right now,” Ward said. “It’s very hard to build this type of single-family product and meet the requirements of the workforce housing designation.

“It’s a tricky game and there’s a fine line there.”

One requirement of the project, which is in a state agriculture district, is the use of the farm plots. Each owner must actively use their plot for agriculture, which also can be rented to others, Ward said.

When asked what those agricultural uses would be, Ward said the definition is “real broad,” but declined to speak further due to the lawsuit. He said prospective buyers will be clearly told about the required agricultural activities.

The state Land Use Commission website says that uses in an agricultural district include cultivation of crops and timber, aquaculture, raising livestock, wind energy and agriculture-support activities (such as mills and employee quarters).

Opponents of the project have filed a motion for a preliminary injunction in Environmental Court, which is scheduled to be heard May 5 by Judge Joseph Cardoza. The complaint includes Na Hinano and project neighbors Nina V. Respicio, Nancy Lynn Smith, Ann Saucier and Mary Greener-Wooten as plaintiffs.

The plaintiffs argue that the housing development defeats the purpose of having agriculturally zoned land. Housing or “farm dwellings” are supposed to be an accessory use with agriculture being the primary use, Collins said.

He said the developer is “just going through the motions” to eventually sell the houses at market rates. If no one qualifies for housing in a particular income bracket, applicants in higher income brackets may purchase the home at higher prices.

“It’s designed to fail so the developer is free to sell homes for open market prices, but still get workforce housing credits,” he said. “This is not real housing for local people.”

Clustering farm dwellings, or homes, on agricultural land, as is the case with this development, is only permitted for plantation housing, Collins said. He said the houses are more like gentlemen estates, similar to ones in Olowalu, just a “slightly smaller version in Haiku.”

“West Maui Land has been doing it for years,” he said.

The project is in a state agricultural district but at the county level is zoned interim, which was created in 1958 to provide temporary regulations until a comprehensive zoning ordinance and map were adopted. Interim zoning allows for a wide latitude of uses from single-family homes to agriculture.

Collins said that courts across the country have ruled interim zoning ordinances illegal because they were meant to be temporary. He noted that only half of the county has adopted comprehensive zoning.

This is the first time a Maui group is challenging the interim zoning ordinance in court, he said.

Concerns over traffic, decades of agricultural chemical use, lack of protection for cultural sites, as well as, water and drainage uses are other issues detailed in the complaint. Na Hinano also alleges that the county failed to meet its public trust obligations under the state constitution and that the development was required to conduct an environmental assessment because it uses old government roads and trails.

County Director of Housing and Human Concerns Carol Reimann said she was advised not to comment on the project because of the lawsuit, but acknowledged that the entire county is in need of housing. Maui County’s population is expected to grow by 25 percent and needs an additional 14,000 homes to keep up with demand over the next decade, according to a 2015 housing demand study conducted by the state Department of Business, Economic Development and Tourism.

The Haiku Community Association will be discussing the Pauwela Homes project and the Kauhikoa Farms subdivision during its monthly meeting at 6 p.m. Thursday at the Haiku Community Center. County and state representatives are expected to attend the meeting.

A workshop for residents interested in the Pauwela Homes project is scheduled for 5:30 to 7 p.m. Tuesday in the multipurpose room of the Pilina Building at the University of Hawaii Maui College. Guests are asked to RSVP to 280-8981.

Applications are being accepted and residents may obtain prequalification from the mortgage company of their choice, Ward said. He said the majority of the application can be done over the phone.

For more information and the application, visit www.pauwelahomes.com/.

The Pauwela Homes project includes three- and four-bedroom homes on 6,900- to 11,500-square-foot house lots. Each lot comes with a 5,000-square-foot farm plot for agricultural use in a condominium-style development. Photo courtesy Kauhikoa Land, LLC