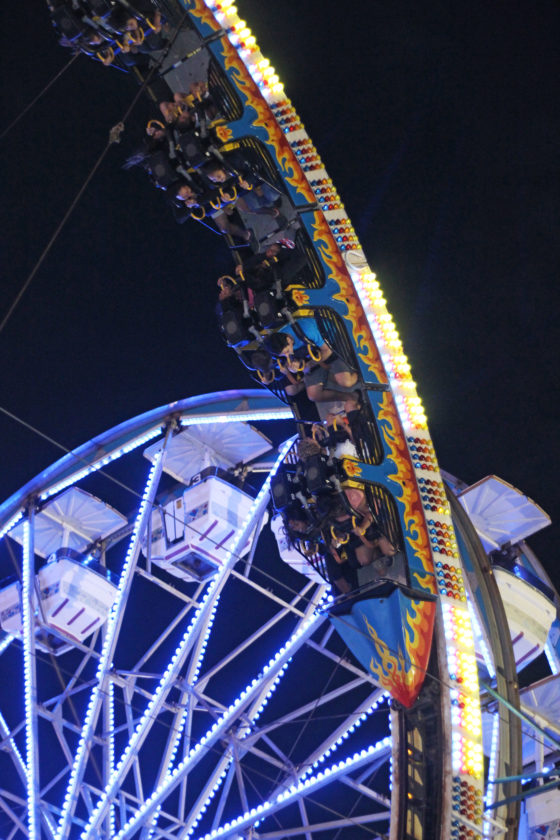 Riders hold on tight on the Fire Ball coaster, which sends riders in upside-down loops on a single track, on April 28 of last year at the first Maui County Carnival at the War Memorial Complex. There will not be a second carnival after E.K. Fernandez announced it was pulling out due to high shipping costs. • The Maui News COLLEEN UECHI photo

E.K. Fernandez Shows’ cancellation of next week’s Maui County Carnival threw a cloud over the Maui Fair as well.

News of the cancellation Thursday over shipping rates that the company says have doubled over the past decade has worried organizers of the 95th Maui Fair, which currently has no contract with the entertainment company.

“I’m totally shocked that they did that,” Avery Chumbley, president of the Maui Fair Alliance, said Thursday. “I had no indication they would cancel other than the conversations we had several months back about escalating costs.

“Now, I am concerned about the fair.”

The four-day carnival debuted last year and was sponsored by the Boys & Girls Clubs of Maui. It was scheduled to begin Thursday at the War Memorial Complex. It is the first time the 114-year-old entertainment company has had to cancel a scheduled event, outside of weather, said company President Scott Fernandez on Thursday. 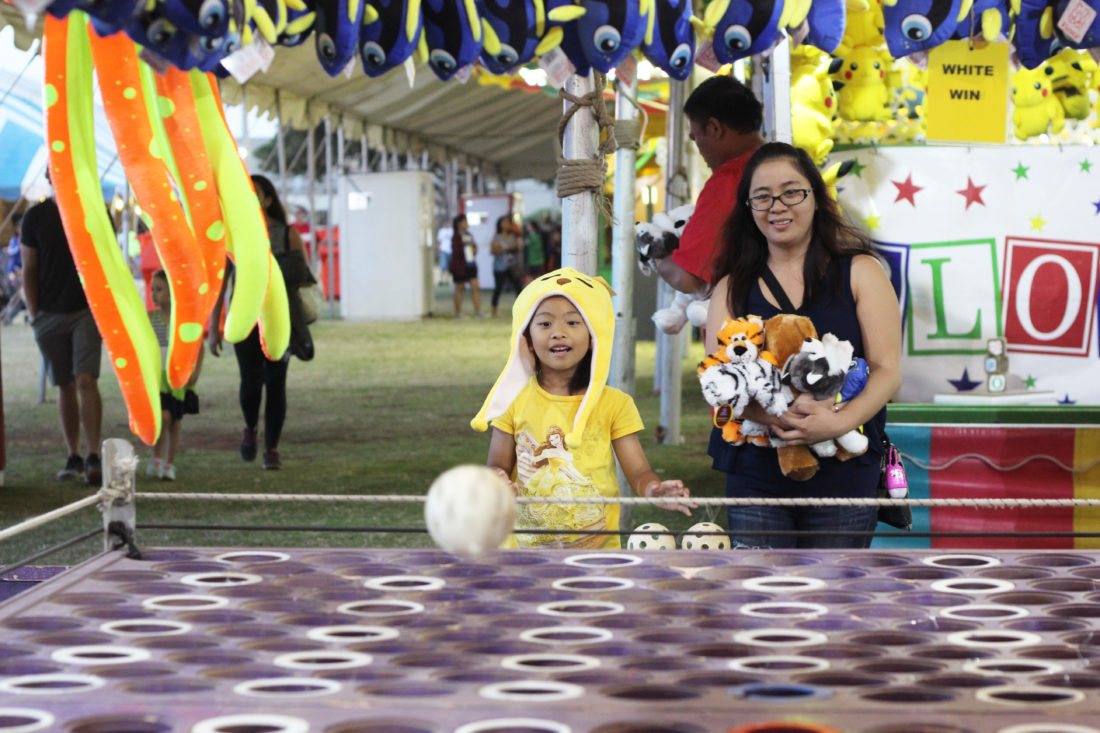 Kahului residents Emily Franco and mom Kathlyn Canave eagerly wait for the ball to fall into a hole to earn Emily a prize at last year's carnival. • The Maui News COLLEEN UECHI photo

E.K. Fernandez Shows paid Young Brothers, which is the sole carrier of shipped goods between Honolulu and the Neighbor Islands, about $300,000 a year to ship equipment for Neighbor Island fairs prior to 2010, Fernandez said. Last year, his company paid more than $500,000 for shipping and would have had to pay an extra $16,500 this year, he said.

“We were trying to work out contractual issues with Young Brothers that were a challenge for us,” Fernandez said. “I was willing to forego many of the onerous clauses we didn’t agree to just to get us there (Maui). I would put them aside and sign the contract, but I needed a better price to get there because the rates they’re quoting us over the last three years have become prohibitive.”

Shipping rates for Neighbor Island fairs and carnivals have risen more than 40 percent in the past three years, which includes $10,000 to $15,000 worth of damage to equipment in shipping, Fernandez said. The company has absorbed increased costs since 2011 and has refrained from raising ride prices, he said.

The company would have been forced to hike up prices for rides and games if it had gone through with the new shipping contract, he said.

“I’m not trying to get in a public battle with Young Brothers, but I had to make an economic decision and moral decision,” he said. “Morally, I can’t raise the price to $8.40 to get on the merry-go-round. I’m going to lose my teeth. Some woman is going to hit me and say how could you do that.”

“I got to look everyone in the face when they’re at my events. This is our family’s life work so we didn’t make this decision easily.”

A Young Brothers official, who declined to be identified, disputed Fernandez’s rate increase statement and said the shipper was willing to work with E.K. Fernandez and the state Department of Transportation to come up with an agreement. The spokesperson said a meeting never materialized, and Young Brothers was notified Wednesday that the carnival would be canceled.

Young Brothers Vice President Roy Catalani said in an emailed statement Thursday that the company provides E.K. Fernandez a special voyage rate to transfer equipment on a single trip. He said the charter affords the entertainment company a discount of more than one-third off its tariff rates.

Young Brothers asked for a 9 percent increase from last year’s shipping cost for the Maui carnival, with 5 percent attributed to state wharfage charges, the spokesperson said. The wharfage rates, which were increased 17 percent last month for state harbor improvements, were the biggest factor in the E.K. Fernandez increase.

The remaining 4 percent of the increase was for inflation and business expenses, including increases in fuel, unscheduled labor and voyage costs, the spokesperson said.

“We offer, and hope, to have a discussion with these interested parties in order to reach a resolution before the Maui Fair in October and other county fairs scheduled statewide,” Catalani said.

The cancellation of the carnival over rising shipping rates has reignited concerns over whether the Maui Fair is in jeopardy. The fair alliance plans to meet in the next couple of weeks to discuss the shipping rates as well as possibly increasing gate prices, Chumbley said. Gate prices could increase from $7 to $10 for the four-day fair that begins Oct. 5, he said.

The alliance also will talk about “the thousand-pound gorilla in the room,” which is its expired contract with E.K. Fernandez, Chumbley said. The entertainment company manages the rides and carnival games at the fair, with the alliance receiving a percentage of gross sales.

Chumbley said he hopes to sign a contract for at least six years to cover the fair’s 100th anniversary.

“I think those contract negotiations are going to be challenging,” he said, noting the increases in shipping rates. “Right now, all the tents we use, we rent from E.K. Fernandez at a very favorable rate. I think that rate is going to increase.”

Fernandez said his company has worked with Maui County for years and exists to entertain the community – but it needs to get here first. He added that he would like to have Neighbor Island shipping costs negotiated with Young Brothers by early May.

“We understand our basic expenses. It comes down to shipping costs,” he said. “In past years, it was more predictable than it is now. We’re going to work with Young Brothers to get numbers ahead of time and then meet with the Maui Fair board.”

Grimes said the intent of the Maui County Carnival was to be long term and to provide ride-seekers another event to possibly decrease lines later in the year at the fair. She added that the carnival planned to have free admission.

It could return next year if E.K. Fernandez wanted, Grimes said.

Fernandez said his company takes on enormous risk with every event, including weather and competing against other forms of entertainment. However, he believes Maui has the population to sustain a carnival and fair.

“Maui should have this,” he said.