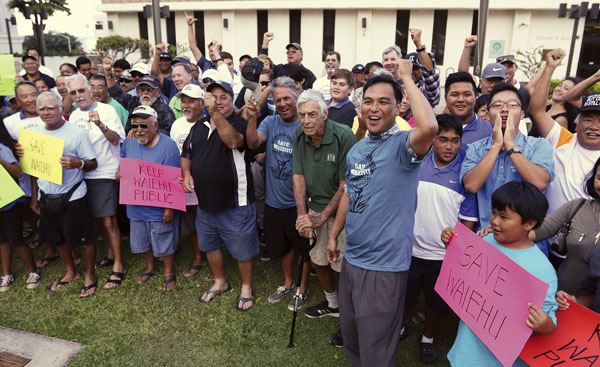 WAILUKU — About 100 high school and adult golfers rallied Tuesday evening outside the Kalana O Maui building demanding the county save its only public golf course, which Mayor Alan Arakawa has proposed to close by the end of the year.

Council Member Don Guzman, who chairs the Parks, Recreation, Energy and Legal Affairs Committee, helped lead the rally and vowed to keep the course open by forming a committee of experts to improve operations.

“This golf course has touched everyone’s life at one point or another,” Guzman said. “Either your uncle, your grandfather, your sister or your brother has played on that course. Basically it’s a course for working families. All the other private courses — there’s no way that any reasonable working family can bring their kids and grandparents and play as a family at the price that Waiehu course gives you.”

The Waiehu Municipal Golf Course has been a target of the mayor’s since his March 9 State of the County address. He announced that the course loses nearly $3 million a year and has lost $16.3 million over the past decade. In his $720.3 million proposed budget, Arakawa left the course on the chopping block and noted the 20 jobs at the course would be transferred to different areas of the Department of Parks and Recreation.

County spokesman Rod Antone confirmed Tuesday that closing the course remained on the table and is “always going to be on the table until we find an alternative solution.”

“We got to actually come up with a plan of action that either takes over operations or decreases losses,” Antone said. “We’re very happy with the discussion and that people are open, but that doesn’t mean we’re taking it off the table.

“We got to solve the problem first.”

Guzman said he hopes his committee will develop plans to bring the course up to par with private ones and start attracting prestigious amateur or collegiate tournaments. He said Kauai’s public course brings in at least 200 to 300 players for its tournaments, and that boosts the economy as well.

“Of course, you’re going to have to put money into the golf course to make money because no other high-end colleges or big tournaments will go to a golf course that is not well maintained,” he said.

The council also is re-examining operations and auditing financial records, Guzman said. The course was originally created as an enterprise fund that generates revenue through green, tournament, rental and vendor fees. That money is then used to pay salaries and fringe benefits.

“They even say it’s for services by the County Council,” he said. “I was like, ‘Where did the council get their share because we’ve never seen it?’

“I think if this was really examined carefully by our mayor, I think they would’ve been able to find these issues and come up with a reasonable solution instead of dramatically saying we’re going to close the only public golf course and basically a historical site.”

Golf course superintendent Todd Allen attended the rally, but could not speak on the matter Tuesday.

He told the council earlier this month that a $2 across-the-board increase, except for students, could net around $128,000 more a year. If the course were to use the internet for its booking and marketing, it could realize $53,000 more annually. Increased revenues could climb to $200,000 annually if the course were marketed properly, he said.

Golf coaches, players and supporters said many of their first memories of golf came from playing at the public course as children. They all asked the council to keep the course running for the younger generations of golfers.

“Most of the teams practice at Waiehu because that’s the only course you can walk really, and the price is right,” Maui High boys golf coach Art Rego said. “By keeping the kids on the golf course, they won’t get into mischief. The kids that are in golf, you normally don’t hear about them getting into trouble.”

Kamehameha Schools Maui boys golf coach Kalani Abarra said his son and daughter grew up on the golf course and the game made them better people. He said he and his wife could not afford golf lessons for their two children, but the affordable price made it possible for his daughter to train and get a scholarship to the University of Hilo.

“I think this is a great opportunity for kids to excel or go to the next level,” he said. “Not everyone is going to go to college on an academic scholarship, so maybe some make it through a sports scholarship.”

Seabury Hall boys and girls golf coach Jack Grodzinsky recalled playing his first golf tournament as a child at Waiehu. He would later play on scholarship for Duke University.

“I can still remember whiffing my first tee shot at Waiehu and feeling awful, but getting through the round,” Grodzinsky said. “That’s what golf is all about. It’s perseverance.

“Every other island has a really nice public option to play and I think Maui should have one too.”

Guzman’s own daughter, Reece, also appears on track to play collegiately and has seven to eight offers. The sophomore leads the Maui Interscholastic League individual championships by 16 shots heading into the final round Saturday.

“There’s no way I could’ve afforded all the rounds that we’ve done to get her where she’s at on a private course,” Guzman said. “There’s no way. Almost every day she’s out there.”

The Maui News WAILUKU — A man arrested for burglarizing homes in Wailuku allegedly entered the homes under a ...

WAILUKU — Bail was set at $150,000 for a Makawao man who was arrested after he allegedly fired a rifle toward ...

The Maui News Public restrooms along Hana Highway will remain closed until further notice while the highway is ...

The Maui News The state Department of Education has been given the go-ahead to modify graduation requirements and ...

Man is arrested for rule violation