A team of divers is documenting state’s underwater wreckage

A nearly intact Curtiss SB2C-1C Helldiver rests just outside Maalaea Harbor. The plane crash-landed after a training exercise gone wrong in 1944, though both the pilot and radio operator emerged safely. -- ED ROBINSON photo

MAALAEA — As the scuba divers slip farther into the depths of Maalaea Bay, the hulking shape of a seven-decade-old, coral-encrusted airplane looms into view. The wreckage is almost completely intact, its wings stretched wide across the ocean floor, its underbelly lodged in the sandy bottom.

It’s been sitting there since its pilot and radio operator ditched it during a botched training exercise in 1944.

“I get very excited finding these types of sites,” said Hans Van Tilburg, maritime heritage coordinator with the Office of National Marine Sanctuaries. “As archaeologists, we’re always seeing something in the present, and then in our mind’s eye doing some time travel.”

Above water, traces of Maui’s World War II history are visible around the island. In Haiku, 4th Marine Division Memorial Park reminds visitors of Camp Maui, where Marines relaxed and trained for warfare. In an empty field alongside Mokulele Highway, a two-story concrete communications building stands alone in what was once the bustling site of the Puunene Naval Air Station. But several remnants of Maui’s role in the global conflict are underwater — rarely seen by residents or visitors.

For the past three years, a team of divers with the National Oceanic and Atmospheric Administration and the University of Hawaii has been documenting underwater wreckage around the islands, the first inventory of its kind in the state. To find the sites, researchers have relied on Navy records, newspaper clippings, local divers and underwater surveys. 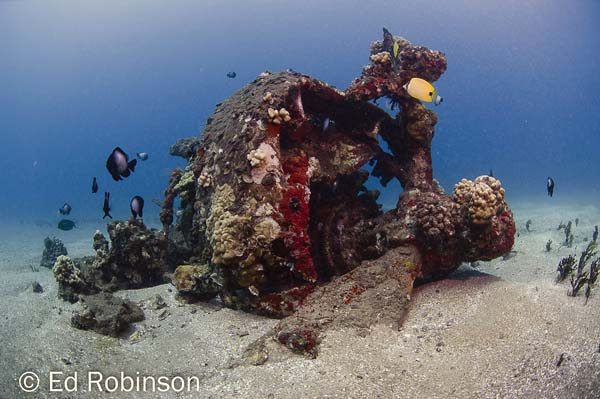 The engine of a F6F Hellcat sits at the bottom of Maalaea Bay. Hellcats accounted for 75 percent of U.S. Navy air victories in the Pacific, but some ended up in the waters off Maui during training. -- ED ROBINSON photo

They count 404 confirmed wreckage sites of planes, ships or major parts around Hawaii. All told, there are 2,120 confirmed and possible sites that have yet to be found but are detailed in historical records. The U.S. Bureau of Ocean Energy Management funded the study and plans to release it soon, Van Tilburg said during a presentation at the Maui Ocean Center on Thursday.

Once home to a major air station and training grounds, Maui has its share of underwater wreckage. Most sites are along the South Maui coast, with a handful off West Maui and the north shore.

Troops preparing for combat in the South Pacific used the island to rehearse operations. Barbed wire was strung up and down the Kihei coastline to simulate the shores of Iwo Jima. Keawakapu Beach had an amphibious training pier where Navy personnel learned embarkation techniques like climbing rope ladders.

“Amphibious tactics, that strategy, was really developed in the ’30s and came to fruition during the war, and is the reason we were successful in the Pacific, I believe,” Van Tilburg said.

Meanwhile, the Puunene Naval Air Station grew to become one of the major flight training stations in the country, excellent for hosting large numbers of squadrons and for practicing night combat tactics. From this base, countless aircraft launched — and some ended up at the bottom of the ocean. 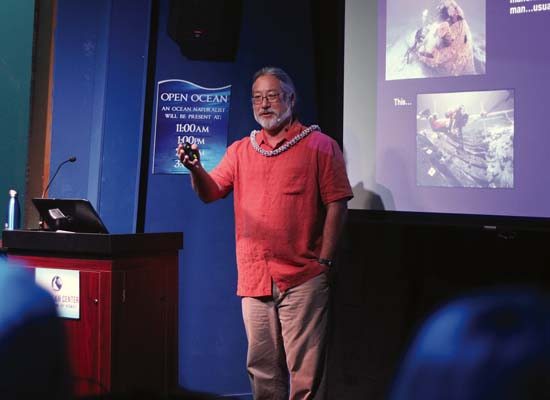 Hans Van Tilburg, maritime heritage coordinator with the Office of National Marine Sanctuaries, talks about crashed planes and shipwrecks in Maui waters Thursday night at the Maui Ocean Center. The National Oceanic and Atmospheric Administration and the University of Hawaii’s Marine Option Program have documented wreck sites around the islands to create the first inventory of its kind in the state. -- The Maui News / COLLEEN UECHI photo

Just outside Maalaea Harbor, the wreck of a Curtiss SB2C-1C Helldiver sits submerged. Local fishermen and dive operators knew of the site and, to the delight of researchers, the wreckage is mostly intact, with a visible serial number that helped pinpoint “the exact incident that led to its demise.”

“Helldivers were dive bombers. It was their job to climb really high and plummet toward their target, release the bomb and then pull out at high G’s,” Van Tilburg said. “They were heavy and they splashed in quite frequently. This was perilous business.”

On Aug. 31, 1944, pilot William E. Dill and radio operator Kenneth W. Joe were doing combat exercises. As they were pulling out of a second steep dive, mounting pressure twisted the plane’s vertical tail assembly, “resulting in complete loss of rudder control,” according to the U.S. Navy’s crash report. They tried to fly back to Puunene but realized they weren’t going to make it and had to ditch the aircraft in the water. Both climbed out to safety.

In a shallower section of Maalaea Bay, an F6F Hellcat is broken up along the ocean floor, where diver Roger Pannier stumbled upon it around 1983, longtime Maui diver Ed Robinson said. F6F Hellcats were “excellent fighter aircraft” that accounted for 75 percent of U.S. Navy air victories in the Pacific, Van Tilburg said. Over time, the wreckage of the Hellcat has fallen apart under restless ocean movement, though the three-blade radial engine and steel landing gear are still fairly intact.

“Often the only things we find on really heavily impacted aircraft wreckage sites is the engine, maybe the prop and the landing gear,” Van Tilburg said.

“That averages out to one or two splashing in every day for the entire year,” Van Tilburg said. “That is a tremendous statistic. That is the commitment in material, in production and sometimes in lives that we made just for training in Hawaii.”

Planes aren’t the only sunken military vessels off Maui. In Makena Bay, the hulls and tracks are what remain of an LVT-4 (landing vehicle tracked). The amphibious vehicle was an innovation for its time because it allowed troops to unload onto the beach via ramp, instead of climbing over the sides and further exposing themselves to enemy fire. While not as “glorious” as a battleship or cruiser, “this was the meat of the game,” Van Tilburg said.

All of the known wreckage around Maui was due to training accidents, though researchers don’t have information on how many resulted in casualties, Van Tilburg said.

“One thing about these wreck sites is that they’re always home for fish,” he said. “I’ve always told students, ‘Fish love their history.’ But I think what the fish actually like more than that is not being eaten by bigger fish.”

Unfortunately, some sites have been disturbed, like the PB4Y-1 Liberator that Doug Niessen found in more than 200 feet of water off Olowalu around 1985. When Robinson photographed the wreck of the long-range naval patrol aircraft in 1987, the plane boasted twin .50-caliber machine guns. In 2006, only one was left, and it wasn’t due to natural deterioration.

“Those are divers that came and took that machine gun out of this historic property,” Van Tilburg said.

State and federal laws protect historic properties, he explained. The Sunken Military Craft Act says that military aircraft and ships remain the property of the federal government unless Congress takes them off the list. Sunken wreck sites are federal property, and damaging them can lead to consequences with the Navy.

More wreckage is yet to be discovered, not only from World War II but also from the sugar plantation days of the late 1800s, but that, Van Tilburg said, is a presentation for another day. 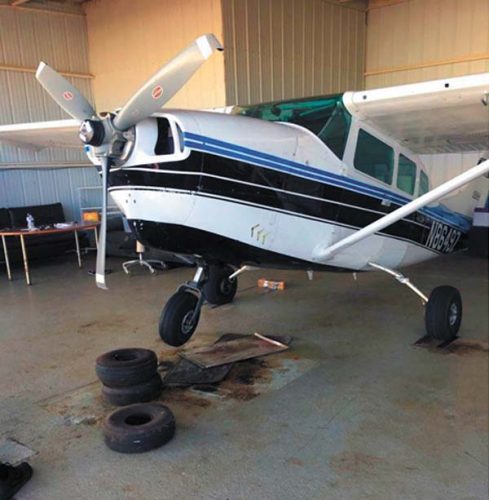 Lieutenant governor: State could be hit hard by surge of coronavirus infections