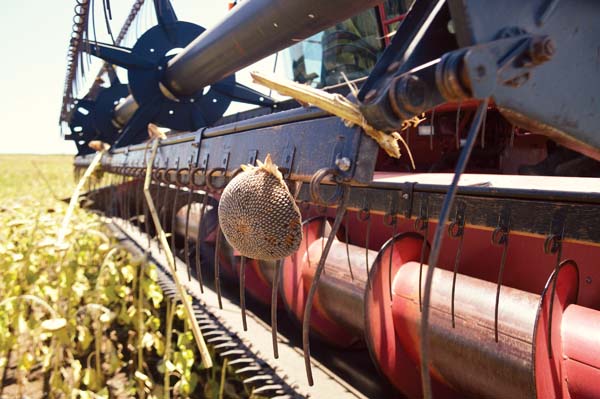 A sunflower head gets stuck on a metal bar of a combine harvester Friday in a field near the intersection of Kuihelani and Honoapiilani highways. Pacific Biodiesel began harvesting its 14-acre field of sunflowers Friday. The combine, purchased from a Northern California family farm, reaps, threshes and winnows oil-rich sunflower seeds from fully matured plants. The seeds will be crushed and pressed into oil at the company’s Big Island biofuel refinery. -- The Maui News / BRIAN PERRY photo

The brightly colored sunflowers that enticed motorists to stop, take selfies and walk among them have withered and turned brown in a 14-acre field near the intersection of Kuihelani and Honoapiilani highways.

Their heads are bowed, like rows of children getting scolded. But even this won’t last long.

Pacific Biodiesel has begun harvesting its first crop of sunflowers. And that was underway Friday as company founder and President Bob King smiled broadly and climbed into the air-conditioned cab of a combine harvester purchased from a family farm in Northern California. He pressed buttons, put the machine into gear and it rumbled to life, heading up and down the rows of dry sunflowers.

“It’s pretty fun,” he said, seated about 12 feet above the ground as the sunflowers slowly passed underneath.

The machine runs on biofuel and does three things in sequence; it reaps, threshes and winnows the sunflowers. The combine’s long arms rotate toward the oil-rich plants, pulling them into a bottom row of scissorlike teeth that cut the sunflower below its head, pull it in and thresh and winnow its seeds that look smaller and darker than the familiar salty seed snack food. 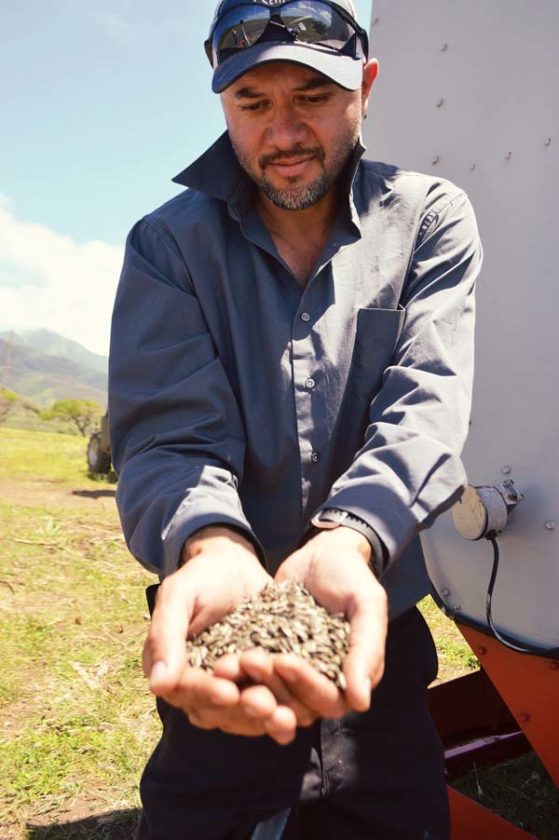 Pacific Biodiesel agricultural specialist Jamie Davidson holds handfuls of harvested sunflower seeds that have already gone through a drying machine. The drying is an early step in the process of turning the oil-rich seeds into biofuel. -- The Maui News / BRIAN PERRY photo

The combine hauls its load of seeds to a drying machine. From there, the seeds are headed to Pacific Biodiesel’s refinery on the Big Island, where they’ll be pressed into oil in a crushing mill. Parts of the plant that aren’t harvested will remain in the field as compost.

The first field is estimated to yield 100 gallons of oil per acre. Pacific Biodiesel plans to produce 32,775 gallons of biodiesel annually from its Maui sunflowers.

The farm currently is the largest biofuel crop project in the state, the company said.

Another field, closer to the ocean, was planted with sunflowers in April and has already has begun sprouting. That crop is expected to flower in a few weeks, and still another field is being prepared for planting, King said.

The first fields were grown without irrigation, he said. But the new fields will receive irrigation in the hot, dry summer months through a process by which water will be brought to the plants by a hose that is deployed and then retracted, he said. 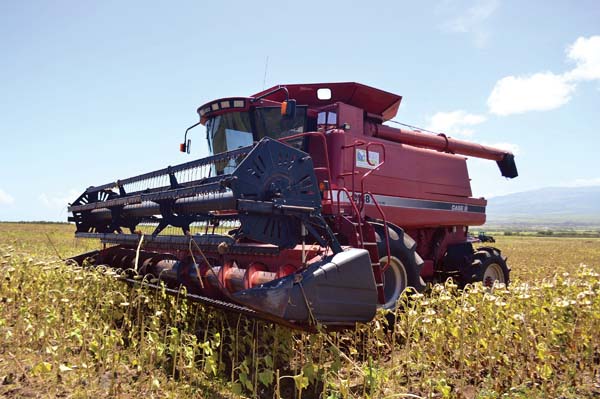 The sunflower crops are an experiment. Other planned crops include safflower, canola and, perhaps, chickpeas.

The company’s first 14-acre crop of sunflowers was sprouting during a project blessing in February. The field is part of 115 acres leased from Waiale 905 Partners, which is headed by Maui Tropical Plantation owner and developer Mike Atherton.

“We have already received interest in our sunflower oil for cosmetic use and as a food-grade vegetable cooking oil for use by local restaurants,” said Pacific Biodiesel public relations associate Kim Sloan. “We will be processing the oil initially for these high-value uses as well as using the oil as a feedstock in the production of our biodiesel.”

The first blooming sunflowers triggered safety concerns for state highways officials after motorists pulled onto highway shoulders to get a closer view of the crop or sometimes trample onto the field for photos. “No trespassing” and “no parking” signs were erected.

Sloan said that, to safely accommodate public interest, Pacific Biodiesel is working with Maui Tropical Plantation to develop a new way for the public to experience the blooming sunflowers. 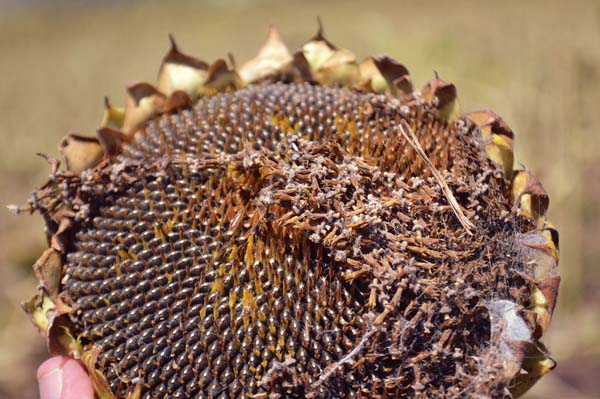 A close-up shows the head of a sunflower that escaped the stem-cutting jaws of a combine. -- The Maui News / BRIAN PERRY photo

“This is part of an ongoing partnership,” she said.

The plantation invited Pacific Biodiesel to farm sunflower demonstration crops on the mauka side of its property to provide safe access for the community, she said.

“These sunflowers should be in full bloom there by early (to) mid-July,” she said.

The state has posted “no parking” signs along Honoapiilani and Kuihelani highways on the perimeter of the sunflower biofuel site, Sloan said, noting that it’s “a working farm on private property.”

For more information, go to www.biodiesel.com.

Many in MAGA movement endorse discrimination

The black and white of guns